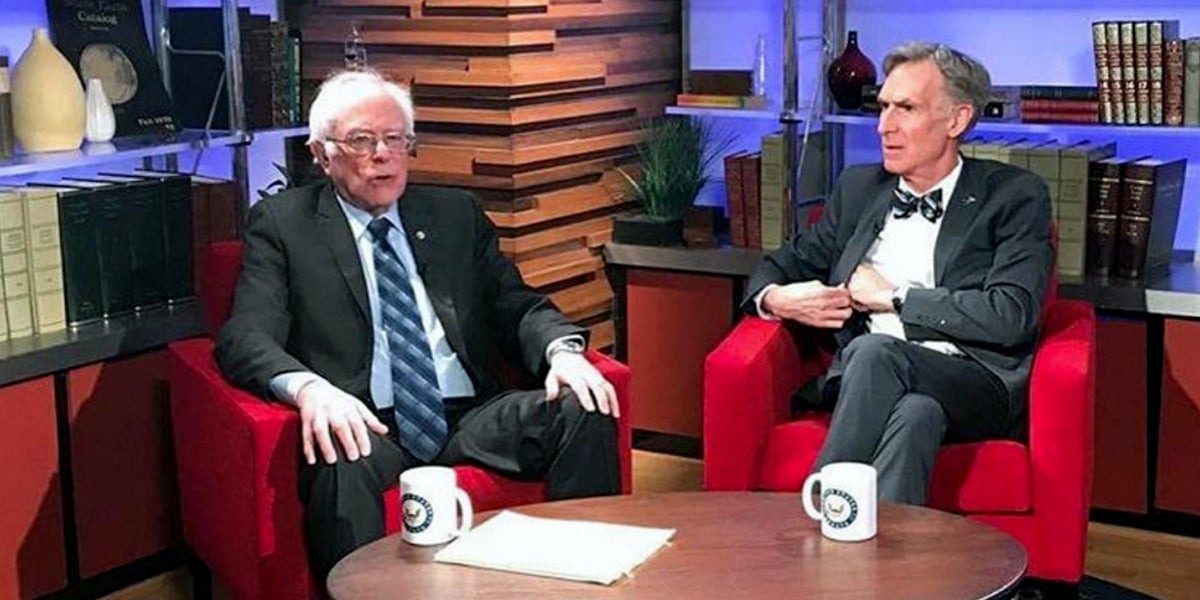 The chat was announced Sunday on the senator’s Facebook page, with many fans eagerly anticipating the sit-down. Here’s what one person said:

The former presidential candidate—who has one of the strongest records on climate change in the Senate and has been highly critical of President Trump‘s cabinet appointees such as U.S. Environmental Protection Agency (EPA) head Scott Pruitt—got straight to the point with his first question to Nye.

“We have a president of the United States who thinks that climate change is a ‘hoax’ emanating from China,” Sanders stated. “We have a new administrator of the EPA—somebody who I strongly opposed—who is in the process of dismembering environmental protection regulations in this country. What are the short and long term implications of a president who has that view?”

In response, Nye said that the long term implications of global warming are “potentially catastrophic,” adding that “the problem is the speed the world is warming and the rate climate is changing.”

As for the short term effects, Nye described how coastal cities such as New York will have to spend billions of dollars to build more seawalls to avoid future extreme weather events such as Hurricane Sandy.

Additionally, he explained how the effects of climate change will be “much more difficult” for people in the developing world who will be forced to migrate and potentially foment conflict due to a lack of resources.

Nye, the former host of the beloved children’s science program Bill Nye the Science Guy, has since become a frequent and prominent commentator about scientific topics, especially the perils of a warming planet.

The half-hour interview covered topics such as climate change deniers, the fossil fuel industry’s tremendous influence in politics, transforming the transportation industry and getting more people interested in science by promoting space exploration.

“Who came up with that number? Regulations are like a machine,” Nye said. “You don’t just take parts away from the machine just because.”

During a poignant moment in the interview, Sanders touched upon the Trump administration’s notorious crackdown on the EPA and climate scientists.

“What is the role of scientists today?” Sanders asked. “[The] people who are searching for truth are under pressure.”

On the topic of climate deniers, Nye said that they suffer from cognitive dissonance, describing how these people have a psychological disorder preventing them from facing reality.

“To the deniers out there. I want you to think about what is called cognitive dissonance,” Nye said. “Instead of accepting that the climate is changing, deniers are denying the evidence and dismissing the authorities.”

Nye said that the best way to change their minds is to convince them of the economic potential of renewable energy. He used The Solutions Project—a state-by-state roadmap to convert the country to 100 percent renewables by 2050—as an example.

“We can power the entire U.S. renewably right now if we just decided to do it,” Nye said, explaining how transitioning from fossil fuels to clean energy alternatives such as wind turbines, solar panels, geothermal, tidal and a reconfigured electric grid “can run the whole place.”

He noted that investing in renewable energy would create domestic jobs “that can’t be exported.”

[instagram https://www.instagram.com/p/BRBVHwFFiZK/ for 10 bucks every 60 days—that’s just fun. Just look at it that way.”