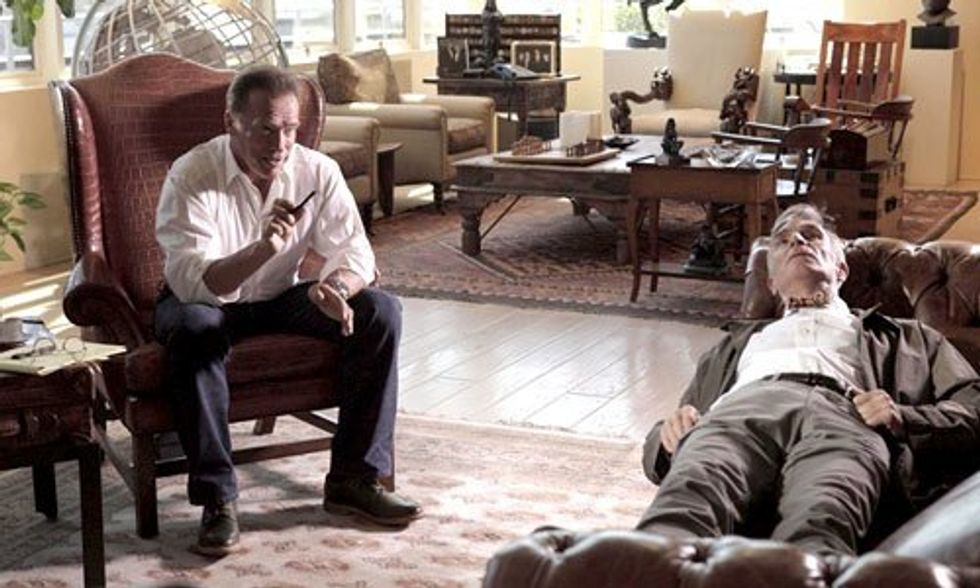 Bill Nye's goes through the five stages of "climate change grief" as he confronts climate denial head on.

"Go on," says Schwarzenegger. "I know the planet is getting hotter and hotter," says Nye. "And I know we're going to have forest fires and droughts and floods like you've never seen. We're going to have storms and hurricanes and species are disappearing."

Nye, exasperated, concludes, "Sometimes I just want to close my eyes and pretend it's not happening." Schwarzenegger's prognosis: "It sounds to me like you are suffering from climate change grief." Schwarzenegger tells Nye he is dealing with the first stage of grief: denial.

So, Schwarzenegger instructs Nye to go "confront denial head on." And that's exactly what he does. Nye hits on many issues, including why it's probably not a good idea to buy a vacation in Southern Florida, Florida Gov. Rick Scott banning the term climate change and a Florida official hilariously refusing to use the term "climate change" as if it's a naughty word. Nye even sits down with climate-denying Florida State Rep. Walter Bryan "Mike" Hill to try to reason with him.

Ultimately, Nye goes through all five stages of "climate change grief"—denial, anger, bargaining, depression and acceptance. During his anger stage, he takes in Canada's Tar Sands by helicopter, calling the sight "depressive." And he meets with Melina Laboucan-Massimo, a Greenpeace activist and Alberta First Nation's member, who has made ending the tar sands development her life's mission.

In his bargaining stage, he looks at programs such as cap-and-trade, which are attempting to limit the amount of carbon pollution we emit into the atmosphere. In his depression stage, Nye meets with Guy McPherson, ecologist and author of Going Dark, who says the game is already over and he's bracing for the end of days. "I can't imagine there will be a human being on the planet in 2030," says McPherson.

And finally, as they each take tokes from a cigar, Schwarzenegger helps Nye "realize" that we're not doomed. Indeed, there is hope because science and technology offer so many solutions to our current problems. We just need to take action.

Check out the full episode here: