Bill McKibben's Letter to the Future 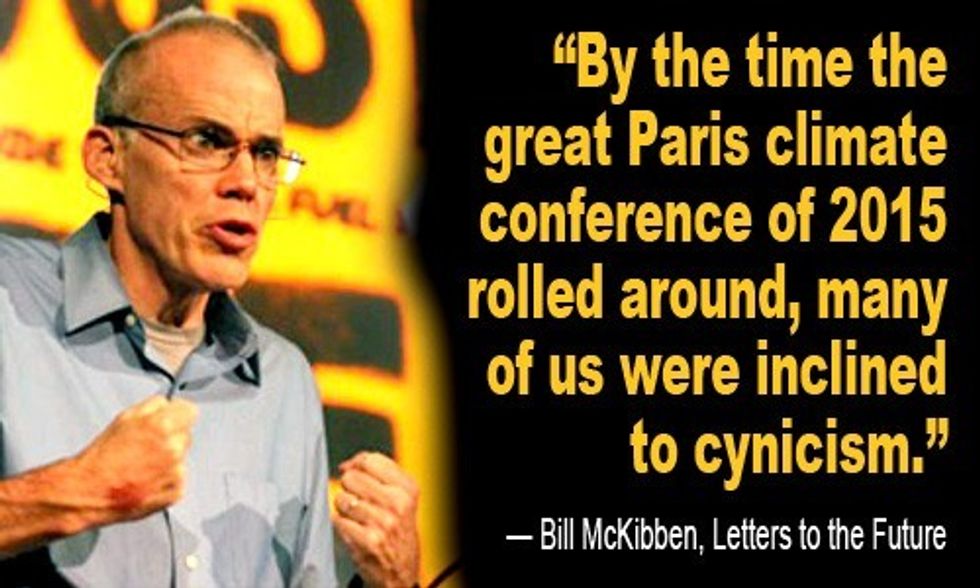 This letter to the future by Bill McKibben is part of the Letters to the Future campaign, a national effort to encourage people from all walks of life to write six generations into the future about climate change. The campaign puts a spotlight on the importance of world leaders agreeing to a global climate treaty at COP21 in Paris. Now it's your turn to write a letter to the future.

The first thing to say is, sorry. We were the last generation to know the world before full-on climate change made it a treacherous place. That we didn’t get sooner to work slowing it down is our great shame, and you live with the unavoidable consequences.

That said, I hope that we made at least some difference. There were many milestones in the fight—Rio, Kyoto, the debacle at Copenhagen. By the time the great Paris climate conference of 2015 rolled around, many of us were inclined to cynicism.

And our cynicism was well-taken. The delegates to that convention, representing governments that were still unwilling to take more than baby steps, didn’t really grasp the nettle. They looked for easy, around-the-edges fixes, ones that wouldn’t unduly alarm their patrons in the fossil fuel industry.

But so many others seized the moment that Paris offered to do the truly important thing: Organize. There were meetings and marches, disruptions and disobedience. And we came out of it more committed than ever to taking on the real power that be.

The real changes flowed in the months and years past Paris, when people made sure that their institutions pulled money from oil and coal stocks, and when they literally sat down in the way of the coal trains and the oil pipelines. People did the work governments wouldn’t—and as they weakened the fossil fuel industry, political leaders grew ever so slowly bolder.

We learned a lot that year about where power lay: less in the words of weak treaties than in the zeitgeist we could create with our passion, our spirit, and our creativity. Would that we had done it sooner!

An author, educator and environmentalist, Bill McKibben is co- founder of 350.org, the first planet-wide, grassroots climate change movement. He has written more than a dozen books and, in 2014, was awarded the Right Livelihood Proze, sometimes called the "alternative Nobel."