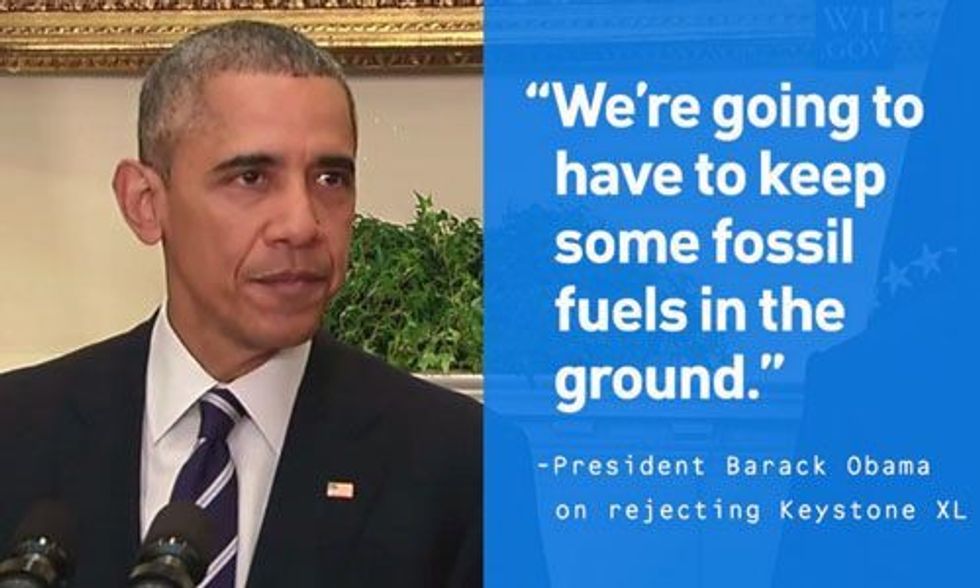 The key passage—the forward-looking passage—of President Obama’s speech last week rejecting the Keystone XL pipeline came right at the end, after he rehashed all the arguments about jobs and gas prices that had been litigated endlessly over the last few years.

“Ultimately,” he said, “if we’re going to prevent large parts of this Earth from becoming not only inhospitable but uninhabitable in our lifetimes, we’re going to have keep some fossil fuels in the ground rather than burn them and release more dangerous pollution into the sky.”

This is a remarkable evolution for the president. He came into office with “Drill Baby Drill” ringing in his ears from the 2008 Republican convention, and baby did he drill. Before his first term was out, he gave a speech in front a stack of oil pipe in Oklahoma in which he laid out his accomplishments:

“Now, under my administration, America is producing more oil today than at any time in the last eight years. That’s important to know. Over the last three years, I’ve directed my administration to open up millions of acres for gas and oil exploration across 23 different states. We’re opening up more than 75 percent of our potential oil resources offshore. We’ve quadrupled the number of operating rigs to a record high. We’ve added enough new oil and gas pipeline to encircle the Earth and then some. So we are drilling all over the place.”

Obama believed he could balance all this drilling with an effort to cut demand for fossil fuels. In his first term he used the Detroit bailout to skillfully exact big increases in auto mileage, and in his second term he’s employed EPA’s regulatory authority to imperil coal-fired power plants. And his team carefully negotiated an agreement with China that pledges rollbacks in the emissions of these superpowers. These were not exactly easy lifts, but they’re the kind of step politicians like to take: They work in fairly hidden ways, and they really bite later, once you’re out of office.

Oh, and they would have been more or less enough—25 years ago. Back then we had plenty of steps we could still take that would have moved us gradually on to a new energy trajectory—low but rising prices on carbon, say. But we didn’t take those steps, in part we now know because energy giants like Exxon simply lied about what they knew, and bred a quarter-century worth of phony debate that prevented real action. Now we’re in literal hot water (hot enough that an international team of scientists recently confirmed that a worldwide wave of coral-bleaching is underway). Which means that the president’s suite of policy initiatives were by definition too little too late. Not unimportant, but by themselves clearly insufficient to lead the world in the race to catch up with physics.

Keystone, by contrast, was the kind of decision politicians hate to make. Here was a big project with lots of money on the line, a clear priority for important players. (The Koch Brothers, never forget, are the largest foreign leaseholders in Canada’s tar sands). So on the one side was the conventional power of the fossil fuel industry, which literally Never Loses. And on the other side was—at the outset—a slightly motley environmental crew of scientists, indigenous people, farmers and ranchers. That small fight eventually attracted lots of others, who saw an opening for venting their great fear of climate change. They were willing to go to jail, and on the back of that commitment came the big green environmental groups, media attention, and the resulting dilemma for the president: Who do I disappoint?

After holding off for four years, the answer was: the oil industry. Which is a very new development. As recently as this summer he’d been willing to give them permission to go drill in the Arctic. But that permission was met with true outrage, enough so that when Shell slunk away in September the administration said it would be giving out no more permits for the Arctic Sea.

One thing that’s changed is the economics of energy. It’s beginning to look like the drop in oil prices is more than just the usual boom-bust cycle. Instead, it’s starting to reflect the dramatic, exponentially accelerating rise in renewable energy. Over the course of Obama’s decision-making on Keystone XL, for instance, the price of a solar panel dropped more than 80 percent. All of a sudden the oil companies look a little tiny bit less mighty.

And the other thing that’s happened is heat. Obama’s term turned out to be the moment when global warming became undeniable to everyone who hadn’t blinded themselves for the sake of ideology or profit. 2015 will be the hottest year ever measured, smashing the record set in … 2014. We’ve burned more of America this year than ever before. Our biggest, richest state is in a drought like none that’s been measured before.

The realization that we had no more time to wait became mathematical in 2012, when a few of us started spreading what at the time seemed like a fringe idea: that the data showed the fossil fuel companies had four or five times as much carbon in their reserves as we could ever safely burn. This argument was fringe at first, but a mushrooming divestment movement spread it across the globe. By this fall it was the governor of the Bank of England, Mark Carney, speaking on the floor of Lloyds of London, who was making the case that we faced “huge risk” from “unburnable carbon” that was likely to become a “stranded asset.”

In this new world, the political equation begins to shift. Four years ago neither Obama nor Romney even mentioned climate change during their presidential battle. This year Bernie Sanders has made it one of the two centerpieces of his campaign (alongside inequality), and he’s skillfully pulled Hillary Clinton along with him. She has so far ended up opposing Keystone and Arctic drilling, but also lifting the ban on crude oil exports. Meanwhile, with polling showing that even 59 percent of Republicans take climate change seriously, the GOP candidates are scrambling to figure out some middle ground that both satisfies the Kochs and doesn’t make them look like loons.

All of this is to say: Read President Obama’s decision as the decision of a weathervane. That’s not an attack—that’s pretty much the way politics work. The (interlocking) combination of a strong movement, strong alternative sources of energy, and the strong signal from the natural world make it easier for him to reject Keystone than approve it. There are other signs of the direction this political wind is now blowing: New York attorney general Eric Schneiderman, for instance, has issued subpoenas to the word’s richest and most powerful company, asking Exxon to explain its catalogue of deceptions over the last quarter century. That’s a gutsy move—but in this new context not a suicidal one. Maybe it’s even a brilliant one politically, which could end up making him a hero in the mold of Teddy Roosevelt breaking up the Standard Oil trust.

As to where it blows next, remember the president’s words in announcing his Keystone decision: “We have to keep some fossil fuels in the ground.” With Keystone he kept some Canadian fossil fuels in the ground, but the pressure builds to do the same at home. Without asking Congress, he can exercise his jurisdiction over public lands in the U.S.—an interesting test will come later this year when he decides whether to lease the offshore Atlantic Ocean for oil drilling. Perhaps they’ll even give up offering up the vast coal deposits of the Powder River basin.

Don’t expect President Obama (or President Clinton) to be out in the lead, and don’t expect Congress to do a damn thing. They’ll need that same kind of movement out there pushing them (as Sen. Sanders (I-Vt.) and Sen. Jeff Merkley (D-Ore.) pointed out last week when they launched the Keep It in the Ground Act on Capitol Hill). The job of movements is to keep brewing up the gale-force winds that shifted our political landscape last week—and to hope we can do it before hurricane-force winds, drought, flood and sea level rise shift our landscape.