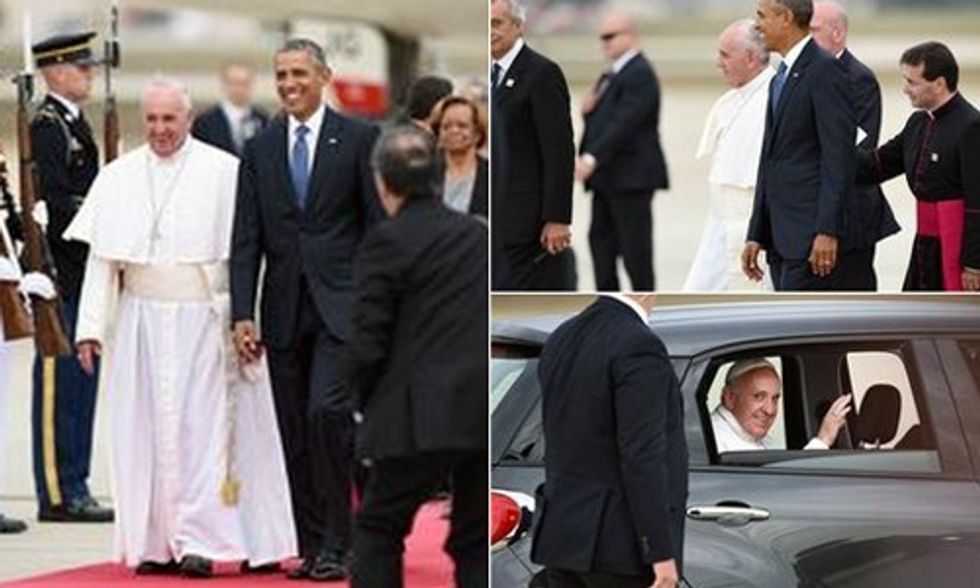 I’m not a Catholic, but credit where credit is due: at the very least Tuesday’s arrival in America of the people’s Pope coincided with a small brace of minor miracles on the climate front.

Early on Tuesday morning, Divest-Invest announced at press conference in New York that the new total of assets in endowments and portfolios divesting from fossil fuels has topped $2.6 trillion. That’s a 50-fold increase on last year’s number—and the year before that, we had precisely one college on board, with an endowment of $13 million.

That news might have passed somewhat unnoticed except that a handsome lad by the name of Leonardo DiCaprio announced at the same time that he was divesting his own assets and those of his charitable foundation—which for some reason seemed of interest to our planet’s news media, go figure.

And then, literally as the papal plane landed, Hillary Clinton completed her long-running metamorphosis on the Keystone pipeline. Before the pipeline review even began, many long years ago, she said she was “inclined to approve” this fuse to one of the planet’s biggest carbon bombs. But as KXL turned into the defining environmental fight of the decade, she went mum. And now, faced with the clear understanding that climate will be a defining issue in next year’s election, she came out in firm opposition to the plan.

It’s not really divine intervention that moved the former Secretary of State (who had originally gamed the State Department review process to approve the project). It was hard hard organizing—thousands went to jail, hundreds of thousands marched, millions wrote public comments. And that work has gone far beyond this one pipeline: its helped turn almost every fossil fuel infrastructure project on the planet into a full-on battle.

Bernie Sanders played his part too. He’s made no direct criticism of Hillary, but he has pointed out regularly how odd it is she has no position on this key issue. As he rose in the polls, her determination to dodge the issue clearly wavered.

But the Pope did help too: his powerful encyclical last summer is a reminder to every politician of exactly which way the wind is now blowing. That wind is in the sails of the climate movement now and so there will be more days like this to come. Whether they come in time to slow the planet’s careening new physics is an open question, but at last the political and financial climate has begun to change almost as fast as the physical one.