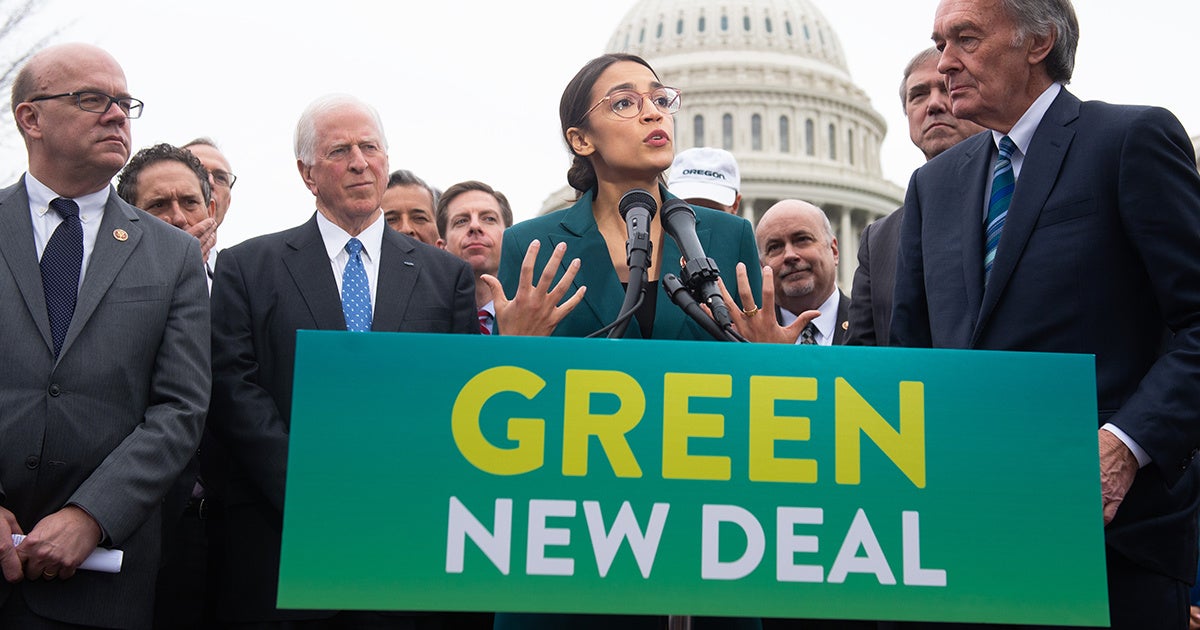 Myron Ebell of the conservative Competitive Enterprise Institute, the man who led the drive to pull America out of the Paris climate accords, said the other day that the Green New Deal was a “back-to-the-dark-ages manifesto.” That’s language worth thinking about, coming from perhaps the Right’s most influential spokesman on climate change.

Ebell’s complaint (and that of the rest of the Right) is that the set of proposals to address climate change and economic inequality put forth last week by Rep. Alexandria Ocasio-Cortez and Sen. Ed Markey would do too much, and cost too much. Indeed, he describes the Green New Deal this way: “It calls for net-zero greenhouse gas emissions in 10 years, ‘upgrading all existing buildings’, and replacing our vehicle fleet with electric cars and more mass transit. And turning our energy economy upside down must be accomplished while ending historic income inequities and oppression of disadvantaged groups.” All of which sounds good not just to me, but to most people: Polling for the Green New Deal is through the roof, especially among young people so ably organized by the Sunrise Movement.

But even if ending historic oppression doesn’t catch your fancy, it’s not a return to the Dark Ages.

A return to the Dark Ages is what happened in New Orleans when Hurricane Katrina hit: Survivors dying in the convention center of a modern American city, locals organizing a makeshift “navy” to try to pluck people from rooftops after levees collapsed.

A return to the Dark Ages is what happened in Puerto Rico after Hurricane Maria, when most of the island was literally dark for months as workers struggled to rebuild power lines.

A return to the Dark Ages is what happened in California last fall, when old people burned to death in their cars while stuck in traffic jams trying to flee deadly wildfires.

And that’s just the United States. Around the world now we’re seeing climate change help ignite diabolical civil war in places like Syria, where the fiercest drought in the history of what we used to call the Fertile Crescent has driven millions of farmers off their land. We’re watching the rapid spread of diseases such as zika via the wings of insects whose range expands as climate warms. Studies have demonstrated that, after years of decline, starvation and child labor are now on the rise as the result of climate stress.

What the future looks like is electric cars, to use one of Ebell’s examples. They outperform internal combustion vehicles by every metric: They move more nimbly, they cost less to own and operate, they break down less often because there are fewer moving parts.

What the future looks like is mass transit. Visit Europe and ride on the trains for a few days and then explain how much more modern it is to sit in traffic jams in American exurbia.

What the future looks like is “upgrading all existing buildings,” because it’s now easy to do. Example after example shows that technology like, say, air-source heat pumps don’t just cut carbon, they cut heating bills, making them affordable from day one.

We’re against these things because—why again?

That better future doesn’t come for free—but it costs pennies on the dollar compared to the future Ebell and his Beltway ilk apparently accept, the one where you have to start moving all the residents of Miami, the one where fire season never stops, the one where growing wheat becomes a chancy proposition. And if you think these political conservatives prefer a less costly plan, think again: When Barack Obama proposed the mighty-modest Clean Power Plan to reduce the use of coal-fired power plants, Ebell called it “illegal.”

What Ebell and his colleagues prefer is—nothing. It’s sticking with coal and gas and oil while the global temperature rises another degree and another and another. Forget the Dark Ages merely 1,500 years ago—Ebell would set Earth back to the interglacial Eemian era, 130,000 years ago. Or maybe the Eocene-Paleocene Thermal Maximum, 55 million years ago.

It’s very clear that conservatives have one plan for dealing with the popularity of the Green New Deal: scaring the hell out of people. And it’s very clear that they have one big problem: The hell they’re building through inaction is a lot scarier than “upgrading all existing buildings.”