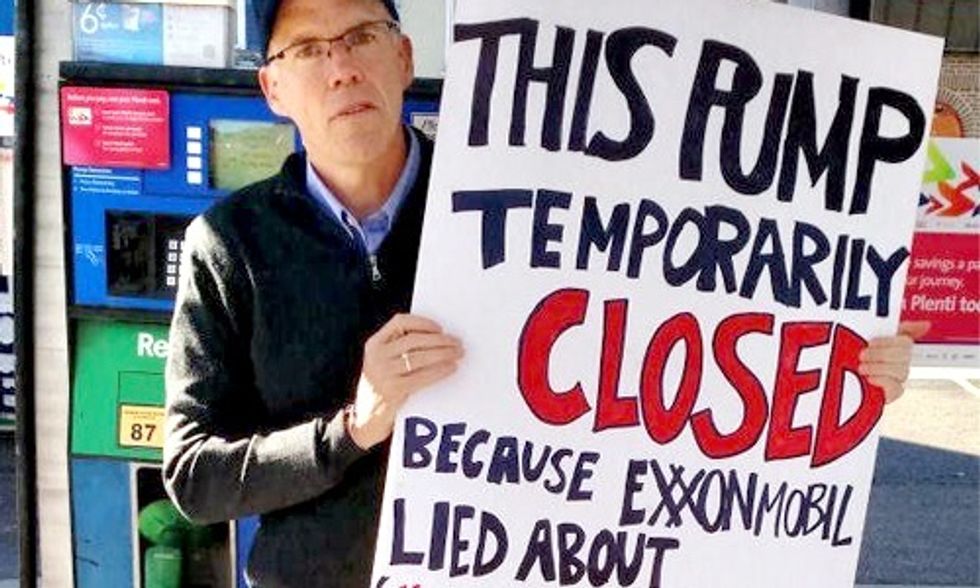 Environmental activist and 350.org co-founder Bill McKibben was arrested on Thursday after staging a protest at a gas station in Burlington, Vermont to bring attention to Exxon Mobil's decades-long efforts to undermine climate action for the corporation's own gain—a strategy he called "unparalleled evil" in an op-ed for the Guardian on Wednesday.

McKibben blocked a gas pump at Simon's Quick Stop and Deli Mobile station, armed with a sign that read, "This pump temporarily closed because Exxon Mobil lied about climate (#ExxonKnew)" with a link to a Tumblr page explaining his actions.

In recent weeks, two separate investigations by Inside Climate News and the Los Angeles Times revealed that Exxon hid evidence of the role of fossil fuels in climate change from the public and stymied political action on global warming. "They predicted that some Arctic oil fields would become cheaper and more accessible," McKibben told the Burlington Free Press on Thursday.

To explain why he felt compelled to stage his solo protest, McKibben wrote on his Tumblr:

This is not just one more set of sad stories about our climate. In the 28 years I’ve been following the story of global warming, this is the single most outrageous set of new revelations that journalists have uncovered. Given its unique credibility—again, it was the biggest corporation on earth—ExxonMobil could have changed history for the better. Had it sounded the alarm—had it merely said "our internal research shows the world’s scientists are right"—it would have saved a quarter century of wheel-spinning. We might actually have done something as a world before the Arctic melted, before the coral reefs were bleached, before the cycles of drought and flood set fully in.

"I don't want this  story to disappear in all this media clutter," McKibben said before his arrest. "We need to let people know what we now know about Exxon Mobil. In a noisy world, this may be what we have to do."

The demonstration drew immediate support from McKibben's fellow activist and writer Naomi Klein, who tweeted, "Exxon has earned hundreds of billions of profits off of decades of lies and deceit. So proud of my friend Bill today:"

Exxon has earned hundreds of billions of profits off of decades of lies and deceit. So proud of my friend Bill today https://t.co/zqtSKDPevz
— Naomi Klein (@Naomi Klein)1444941083.0

"Recent reporting has shown Exxon to be the willing and cold-blooded perpetrators of one of the worst corporate crimes in U.S history," 350.org spokesman Karthik Ganapathy told The Huffington Post. "We should be paying more attention to it, collectively."

McKibben's protest came on the heels of a congressional push for a federal inquiry into Exxon to determine if the corporation broke the law by "failing to disclose truthful information" about climate change.

Reps. Ted Lieu (D-Los Angeles) and Mark DeSaulnier (D-Walnut Creek) on Wednesday wrote a letter to Attorney General Loretta Lynch, asking the Department of Justice to investigate whether Exxon violated the Racketeer Influenced and Corrupt Organizations (RICO) Act, as well as a slew of other laws, including those protecting public health, truth in advertising, and consumer safety.

"If these allegations against Exxon are true, then Exxon's actions were immoral," Lieu and DeSaulnier wrote. "We request the DOJ investigate whether ExxonMobil's actions were also illegal."

"When I read the Times investigation it occurred to me that it is very similar to what the tobacco companies were doing decades ago," Lieu told the Los Angeles Times. "Evidence showed that what they were saying was incorrect and they kept spreading this disinformation campaign."

Federal prosecutors used the RICO Act to charge tobacco companies after they were found to be withholding information about the health impacts and addictiveness of smoking. "Exxon's situation is even worse," said Lieu. "It was taking advantage of the science ... while denying the facts to the public."