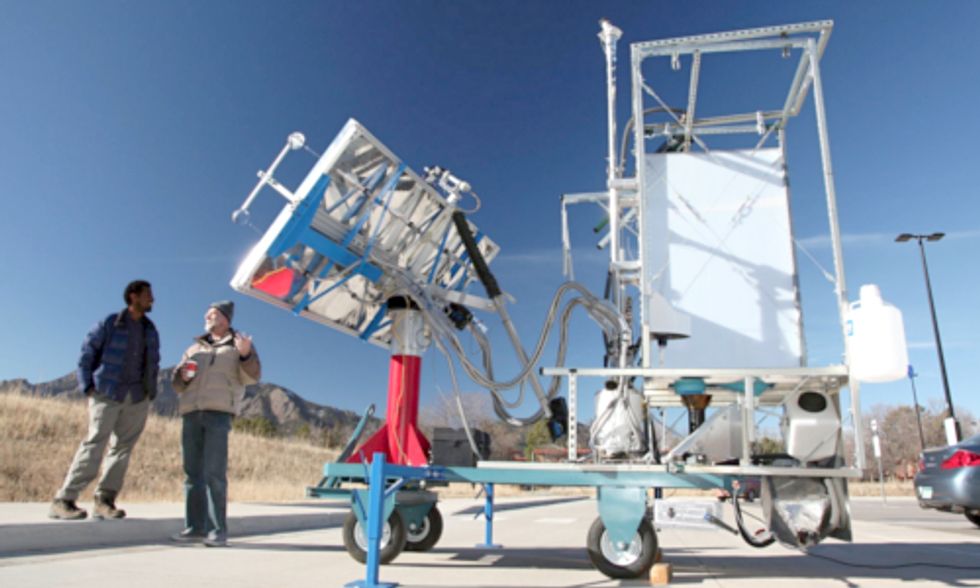 This isn't the first time you've heard a college professor say his team of researchers is working on something that has never been done before, but it's likely the first time such a statement has been associated with a technology that takes advantage of both solar energy and feces.

Karl Linden, a professor of environmental engineering at the University of Colorado Boulder (UC-Boulder), and a team of post-doctoral fellows, students and other professors have created a solar-powered toilet capable of heating human waste to temperatures high enough to sterilize it and create biochar, which is porous and has multiple agricultural functions, including the encouragement of greater crop yields and soil stabilization.

To make things a bit easier, Linden has referred to the end-product as "poop-char."

Professor Karl Linden displays the "poop char" created by a solar toilet his team of researchers have developed. Photo credit: University of Colorado

The team's self-contained, waterless toilet includes eight parabolic mirrors that focus concentrated sunlight on a tiny spot on a quartz-glass rod that connects to eight bundles of fiber-optic cables. Each of those cables consists of thousands of intertwined, fused fibers. The solar energy transferred to the fiber-optic cable system can heat up the reaction chamber to over 600 degrees to treat the waste material, disinfect pathogens in both feces and urine and produce the char.

“While the idea of concentrating solar energy is not new, transmitting it flexibly to a customizable location via fiber-optic cables is the really unique aspect of this project,” Linden said in a statement.

Why would anybody want to heat and treat human waste? Scientists have been doing it for years, attempting to find uses for it that range from animal feed to attempts at creating more drinkable water. According to UC-Boulder, unsafe methods to do this often result in serious health problems or deaths. About 700,000 children die as a result of food and water that contains pathogens from fecal matter.

The UC-Boulder team is one of 16 around the world since 2011 that has received funding from the Bill & Melinda Gates Foundation as part of the "Reinvent the Toilet Challenge," which is an effort to develop a toilet that can create useful end-products while also disinfecting liquid and solid waste, operating off the grid, costing users less than 5 cents per user per day. According to the Foundation, there are about 2.5 billion people around the world without access to safe and affordable sanitation.

All of the participating teams have shipped their inventions to Delhi, where they will be on display starting March 22 for scientists, engineers and dignitaries.

The current toilet can serve four to six people a day, but the team is working on a larger facility that could serve multiple households simultaneously. Linden and the group are trying to secure additional investments.

“We are continuously looking for ways to improve efficiency and lower costs," Linden said.

Bill Gates has also funded a group of researchers at the Massachusetts Institute of Technology working on commercializing liquid-metal batteries that can store energy for less than $500 per kilowatt-hour.