Bike-Friendly Cities Should Be Designed for Everyone, Not Just for Wealthy White Cyclists 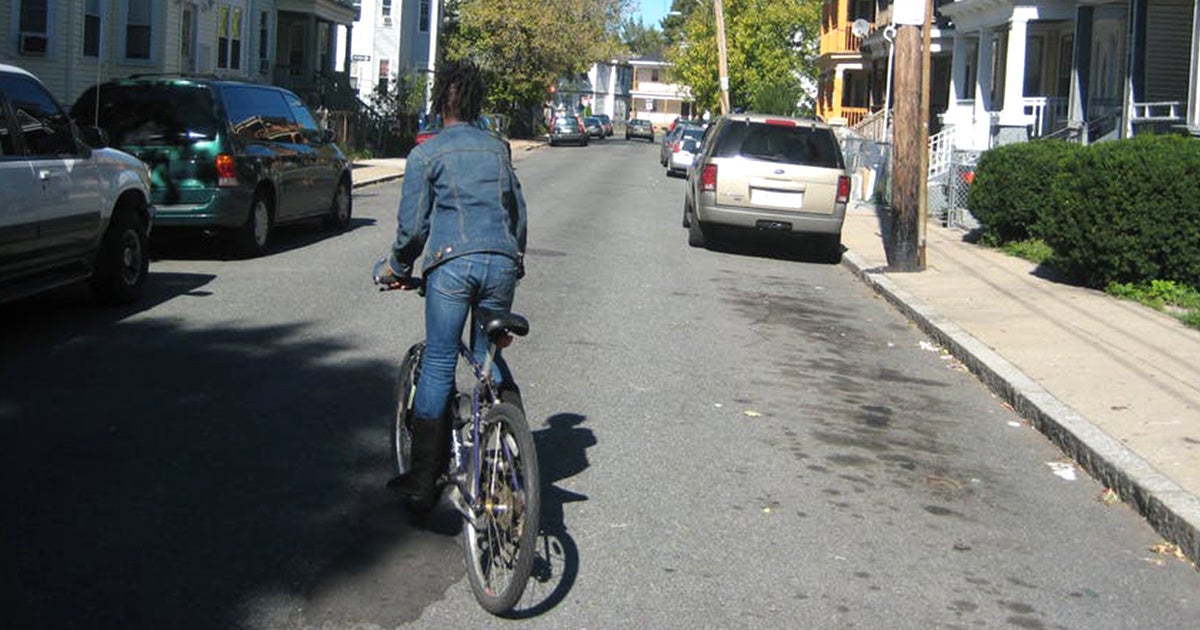 This narrow street, lined with parked cars but devoid of people, is both unwelcoming and unsafe for cyclists. Anne Lusk, CC BY-ND

Designing for bikes has become a hallmark of forward-looking modern cities worldwide. Bike-friendly city ratings abound, and advocates promote cycling as a way to reduce problems ranging from air pollution to traffic deaths.

But urban cycling investments tend to focus on the needs of wealthy riders and neglect lower-income residents and people of color. This happens even though the majority of Americans who bike to work live in households that earn less than $10,000 yearly, and studies in lower-income neighborhoods in Brooklyn and Boston have found that the majority of bicyclists were non-white.

I have worked on bicycle facilities for 38 years. In a newly published study, I worked with colleagues from the Harvard T.H. Chan School of Public Health and Boston groups focused on health and families to learn from residents of several such neighborhoods what kinds of bike infrastructure they believed best met their needs. Some of their preferences were notably different from those of cyclists in wealthier neighborhoods.

Bike equity is a powerful tool for increasing access to transportation and reducing inequality in U.S. cities. Surveys show that the fastest growth in cycling rates since 2001 has occurred among Hispanic, African-American and Asian-American riders. But minority neighborhoods have fewer bike facilities, and riders there face higher risk of accidents and crashes.

Many U.S. cities have improved marginalized neighborhoods by investing in grocery stores, schools, health clinics, community centers, libraries and affordable housing. But when it comes to bicycle infrastructure, they often add only the easiest and least safe elements, such as painting sharrows—stencils of bikes and double chevrons—or bike lane markings, and placing them next to curbs or between parked cars and traffic. Cycle tracks—bike lanes separated from traffic by curbs, lines of posts or rows of parked cars—are more common in affluent neighborhoods.

Compared with white wealthier neighborhoods, more bicyclists in ethnic-minority neighborhoods receive tickets for unlawful riding or are involved in collisions. With access to properly marked cycle tracks, they would have less reason to ride on the sidewalk or against traffic on the street, and would be less likely to be hit by cars.

In my view, responsibility for recognizing these needs rests primarily with cities. Urban governments rely on public participation processes to help them target investments, and car owners tend to speak loudest because they want to maintain access to wide street lanes and parallel parking. In contrast, carless residents who could benefit from biking may not know to ask for facilities that their neighborhoods have never had. 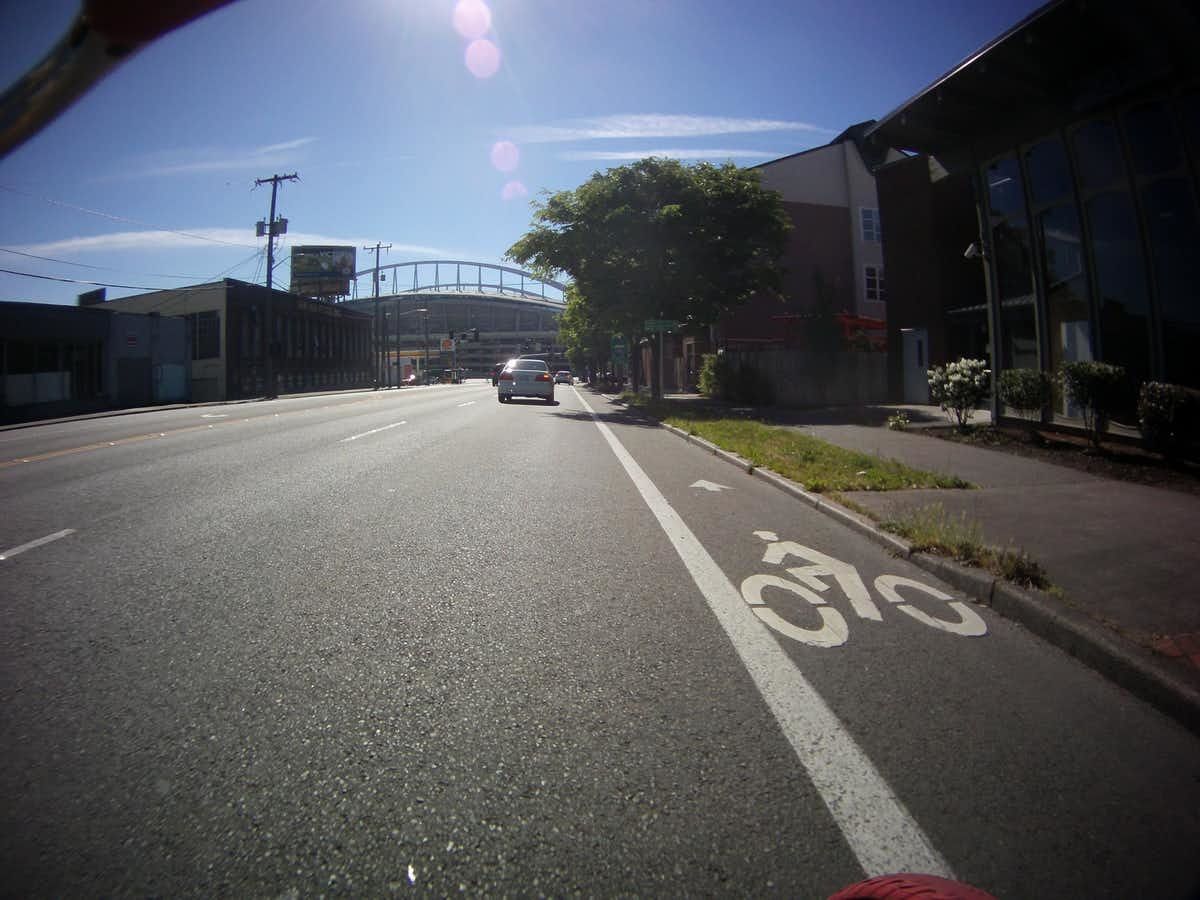 Substandard bike lanes, like this one in Seattle, expose cyclists to unsafe passing by motorists and collisions with cars turning right at intersections or pulling out of driveways. Joshua Putnam, CC BY

Protection From Crime and Crashes

For our study, we organized 212 people into 16 structured discussion groups. They included individuals we classified as “community-sense”—representing civic organizations such as YMCAs and churches—or “street-sense,” volunteers from halfway houses, homeless shelters and gangs. We invited the street-sense groups because individuals who have committed crimes or know of crime opportunities have valuable insights about urban design.

We showed the groups photos of various cycling environments, ranging from unaltered streets to painted sharrows and bike lanes, cycle tracks and shared multi-use paths. Participants ranked the pictures according to the risk of crime or crashes they associated with each option, then discussed their perceptions as a group.

Studies have shown that awareness of criminal activity along bike routes can deter cyclists, and this is an important concern in low-income and minority neighborhoods. In a study in Boston’s Roxbury neighborhood, I found that African-American and Hispanic bicyclists were more concerned than white cyclists that their bikes could be stolen. Some carried bikes up three flights of stairs to store them inside their homes.

From an anti-crime perspective, our focus groups’ ideal bike system was a wide two-way cycle track with freshly painted lines and bike stencils plus arrows, free of oil or litter. Conditions around the route also mattered. Our groups perceived areas with clean signs, cafes with tables and flowers, balconies, streetlights and no alleyways or cuts between buildings as safest. They also wanted routes to avoid buildings that resembled housing projects, warehouses and abandoned buildings.

For crash safety, participants preferred cycle tracks separated from cars by physical dividers; wide cycle track surfaces, colored red to designate them as space for bicyclists; and bike stencils and directional arrows on the tracks. In their view, the safest locations for bike facilities had traffic signals for bikers, clearly painted lines, low levels of traffic, and did not run near bus stops or intersections where many streets converged.

It's been four years since the City installed the popular Penn Ave bike lanes. However, they end at 16th St, where riders are confronted with chaotic traffic patterns. We support extending the Penn Ave Bike Lanes into the surrounding neighborhoods! https://t.co/PeVmTh0bFg pic.twitter.com/xzPsCZELyF

Rules for the Road

We compared our results with widely used bicycle design guidelines and Crime Prevention Through Environmental Design principles to see whether those sources reflected our participants’ priorities. The guidelines produced by the American Association of State Highway and Transportation Officials and the National Association of City Transportation Officials provide engineering specifications for designing bicycle facilities that focus on road elements—paint, delineator posts and signs—but do not describe design features that would protect vulnerable humans bicycling through an environment at night. Our study asked people about what kinds of surface markings and features in the surrounding area made them feel most comfortable.

As an example, our groups preferred street-scale lighting to brighten the surface of cycle tracks. In contrast, tall highway cobra-head lights typically used on busy urban streets reach over the roadway, illuminating the road for drivers in vehicles that have headlights.

In higher-income neighborhoods, cyclists might choose bike routes on side streets to avoid heavy traffic. However, people in our study felt that side streets with only residential buildings were less safe for cycling. This suggests that bicycle routes in lower-income ethnic-minority neighborhoods should be concentrated on main roads with commercial activity where more people are present.

Decisions about public rights-of-way should not be based on how many car owners or how few bicyclists show up at public meetings. Our study shows that city officials should create networks of wide, stenciled, red-painted, surface-lighted, barrier-protected, bicycle-exclusive cycle tracks in lower-income ethnic-minority neighborhoods along main streets. This would help residents get to work affordably, quickly and safely, and improve public health and quality of life in communities where these benefits are most needed.

Anne Lusk is a research scientist at Harvard University.
Disclosure statement: Anne Lusk does not work for, consult, own shares in or receive funding from any company or organization that would benefit from this article, and has disclosed no relevant affiliations beyond her academic appointment.