The Power of Bike Education to Transform Lives and Communities 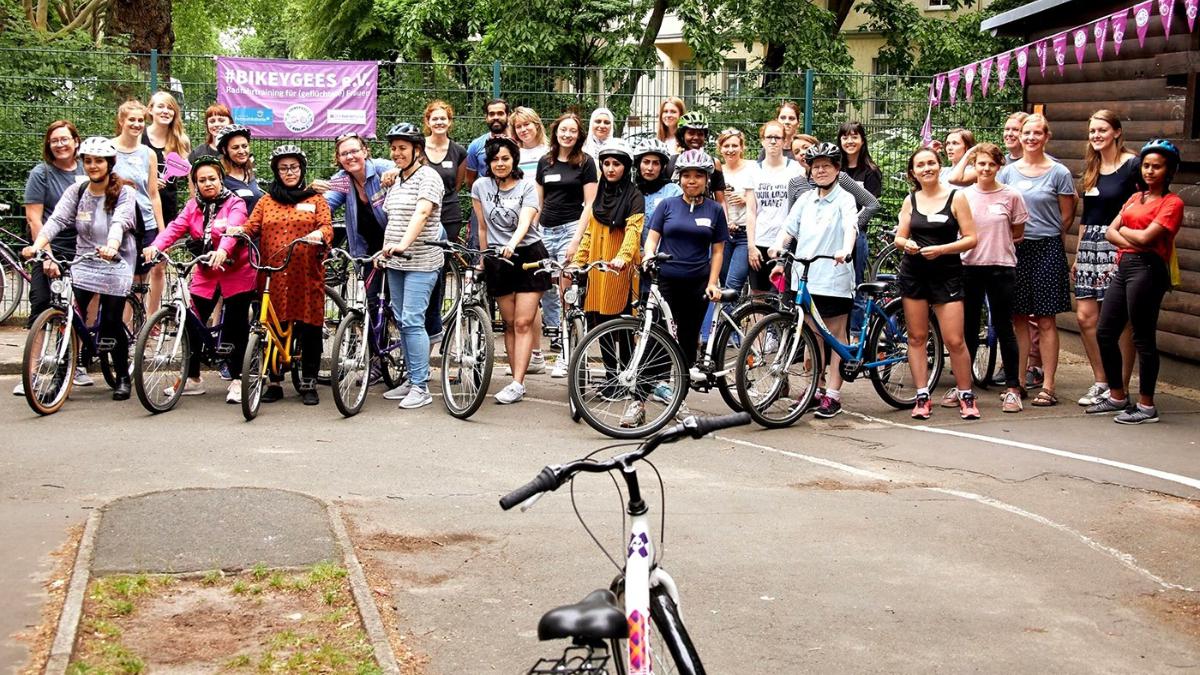 Many Americans learned to ride bicycles as kids. I still remember zipping around a cul de sac in my neighborhood, shrieking with glee and reveling in my newfound freedom after the training wheels came off. But those who did not have the opportunity to learn to ride during their childhood often face uncertainty or anxiety about learning as adults. Bicycle education programs help those who want to become cyclists overcome that fear while also addressing problems in their communities — from pollution to racial injustice.

And biking’s popularity has only increased during the pandemic: Bicycle sales skyrocketed in the United States in March 2020 as commuters sought to avoid crowded means of public transportation. Organizations around the world are using bicycle education to empower new riders and advocate for more sustainable, equitable, and inclusive communities.

In 2015, Germany coined a new term, Willkommenskultur, to describe the welcoming culture rolled out to greet arriving refugees, many of whom were fleeing the Syrian war. This culture led to an explosion of new volunteer organizations eager to address the needs of new arrivals. Few groups have had as lasting an impact (or as much fun) as #BIKEYGEES in Berlin. According to Annette Krüger, its founder, the organization teaches “women from all over the world” how to ride bicycles.

For immigrants to Germany, where about nine out of every 10 residents own a bicycle, learning how to ride means becoming part of a community. On bikes, women “can discover areas in their neighborhood” and experience “an improvement in independence, mobility, and security,” says Greta Aigner, a trainer at #BIKEYGEES. 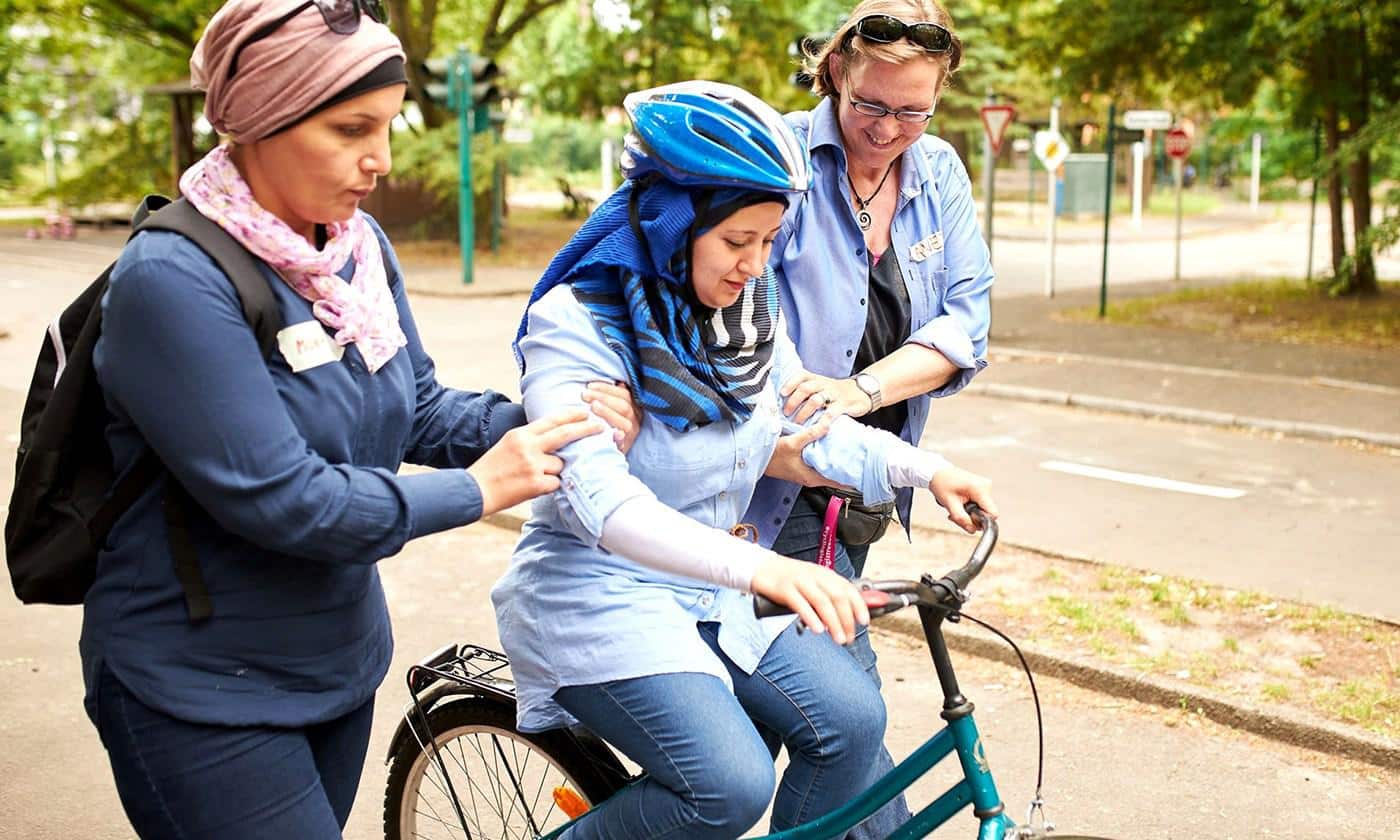 Annette Krüger, right, and another #BIKEYGEES coach, left, help a woman balance on a bicycle during a #BIKEYGEES class in Berlin. Deutsche Fernsehlotterie / Jan Ehlers

#BIKEYGEES was awarded the German Bicycling Award in 2018 for its service to the community, its focus on women’s empowerment, and its promotion of sustainable transportation. Krüger and her team now give regular riding lessons in 15 locations in Berlin and the neighboring town of Brandenburg. She characterizes the courses as “two hours of happiness.”

“You don’t have to register,” she says. “You can come as you are. We only ask: Do you want to learn how to ride a bike? Or do you want to learn how to teach to ride a bike? We are all learning something.” Krüger’s advice to anyone looking to make an impact is to start now. “It’s so easy to change the world, but we have to do it,” she says, “and the bike is the perfect vehicle for it.”

Like #BIKEYGEES in Berlin, many bicycle education programs in the U.S. work with immigrants who did not learn to ride as kids. Lana Zitser, a Russian immigrant who has spent most of her life in the U.S., says she only committed to learning in her 30s to set a good example for her 11-year-old son who was also learning to ride. She says that while her older brother learned how to ride when they were kids, her mother was “extremely overprotective” of her. “My girlfriends who also grew up in Russia don’t know how to ride bicycles either,” she says.

Zitser signed up for classes with an organization called Sustainable Streets, based in Los Angeles County. “I’m grateful for the experience,” she says. “Now I ride around the neighborhood with my family.”

Ron Durgin, co-founder and executive director of Sustainable Streets, says he loves empowering new riders like Zitser. He co-founded the organization in 2009 with the belief that turning more Angelenos into cyclists would mean turning Los Angeles’ urban environment into “a more livable community.”

“There’s this kind of mindset about Los Angeles,” Durgin says. “People come to Los Angeles, and they think they have to buy a car.” With millions of cars on its streets, people living in Los Angeles County are exposed to 60% more vehicle pollution than the average Californian, and a whopping 250% more than San Francisco Bay area residents. 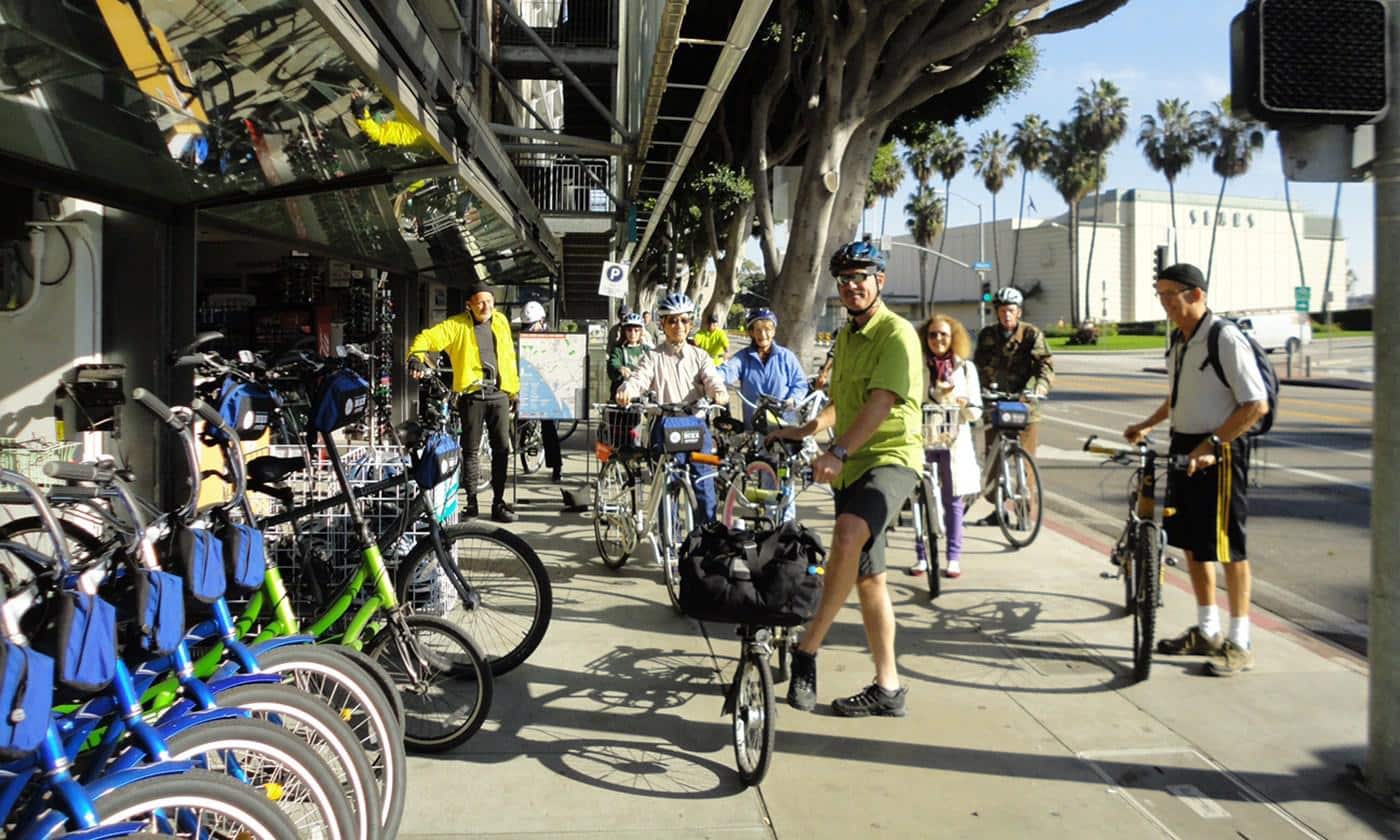 Los Angeles County’s auto-centric urban planning also means its streets are less walkable and its residents have little access to parks or other public spaces. Across Los Angeles County, there is an average of only about 3 acres of parklands per 1,000 residents, which is a meager one-third of the national average.

“Whether it’s air quality, water quality, land use, [or] the way we allocate public space,” Durgin says, cyclists can have a big impact on city life. Research shows that cities with good bicycle infrastructure and more riders have higher per capita GDPs, less traffic and pollution, and happier citizens.

More than a decade after its founding, Sustainable Streets’ adult education programs have helped hundreds learn how to ride, understand the rules of the road, navigate their cities, and perform basic bicycle maintenance. The organization has also had great success influencing bike infrastructure. Sustainable Streets and its allies have lobbied the city of Santa Monica to improve bicycle parking and even establish a dedicated bike campus near its headquarters. At the bike campus, cyclists can practice riding and learn the rules of the road in a safe environment.

“It has always been a goal of mine to learn to ride a bike,” says Julie Maharaj, who attended an adult learn-to-ride class on the Santa Monica bike campus last year. “[The class] has definitely given me more confidence and a feeling of accomplishment,” she says.

Durgin says his best advice for other groups looking to start bicycle education programs is to lean on community partners. If you can’t find partners, make them. Sustainable Streets has gained favor with law enforcement officers, city administrators, and skeptical locals by inviting them on social rides. “We just tried to weave [them] in,” Durgin says. “There’s just a joy and a feeling of freedom when you’re on a bike and getting outside and socializing with other people.”

Unlike Los Angeles, New York City is known for having its fair share of bicyclists. According to the New York Department of Transportation, nearly 900,000 New Yorkers ride regularly, and more than 50,000 depend on their bicycles to commute. But research shows that the majority of people who choose to commute by bike are wealthy and White. They are often drawn to bicycling for environmental or health reasons.

But for lower-income communities and communities of color, especially for people with disabilities or those who have health limitations, bicycling is not always so feasible or even desirable. Members of these communities often have to live farther from city centers and travel longer distances for work, often on roads that lack the infrastructure for safe cycling.

“When you talk about access… it’s not only about providing someone a bicycle,” says Hilena Tibebe, board member of Bike New York and founder of Ride to DC, which works to raise awareness of the racial disparity within the cycling community and increase access and inclusion for cyclists who are Black, Indigenous, or people of color. It’s also about “providing someone a helmet, creating a route that is accessible for all, being able to ride a bike, [and] having the roads to bike on,” she says.

Low-income residents and people of color accounted for much of the uptick in cyclists in the 2000s, but they are also often neglected by investments in cycling infrastructure that make roads safer and more accessible. Instead, cities tend to focus on the needs of wealthy White cyclists.

For Bike New York, whose mission is to “transform the lives of New Yorkers through cycling,” these disparities are unacceptable. By placing its adult education and after-school classes, summer camps for kids, and bicycle libraries (an innovative program that allows kids to borrow bicycles in public parks for recreational use) in underserved communities, the organization is trying to “level the playing field,” says Ken Podziba, the organization’s CEO. “There aren’t enough people of color riding, and we’re trying to help.” 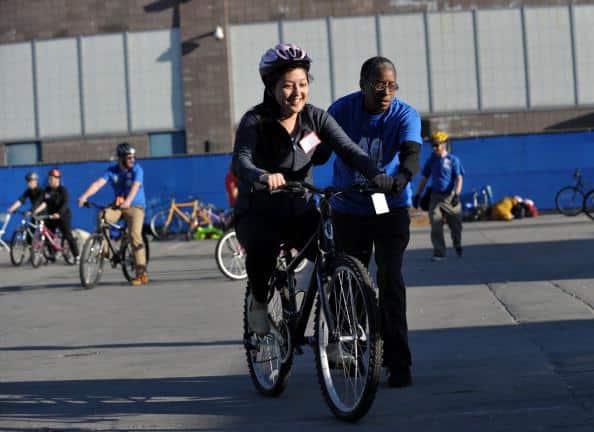 A volunteer helps a participant in a “Learn to Ride – Adult Class” organized by Bike New York for adults learning to ride a bicycle on May 3, 2013 in New York. STAN HONDA / AFP via Getty Images

Bike New York now provides bicycle education to 30,000 New Yorkers per year in all five boroughs and has a network of more than 3,000 volunteers.

Podziba says that Bike New York’s largest boon has been partnering with the city and placing its education programs in local parks, which provide safe spaces for riders to learn and practice and for Bike New York to store its bikes and helmets. In the future, Podziba says he hopes others will emulate this model and that there will be better communication among bike organizations “so we could all learn together, work together, support each other, build each other up.”