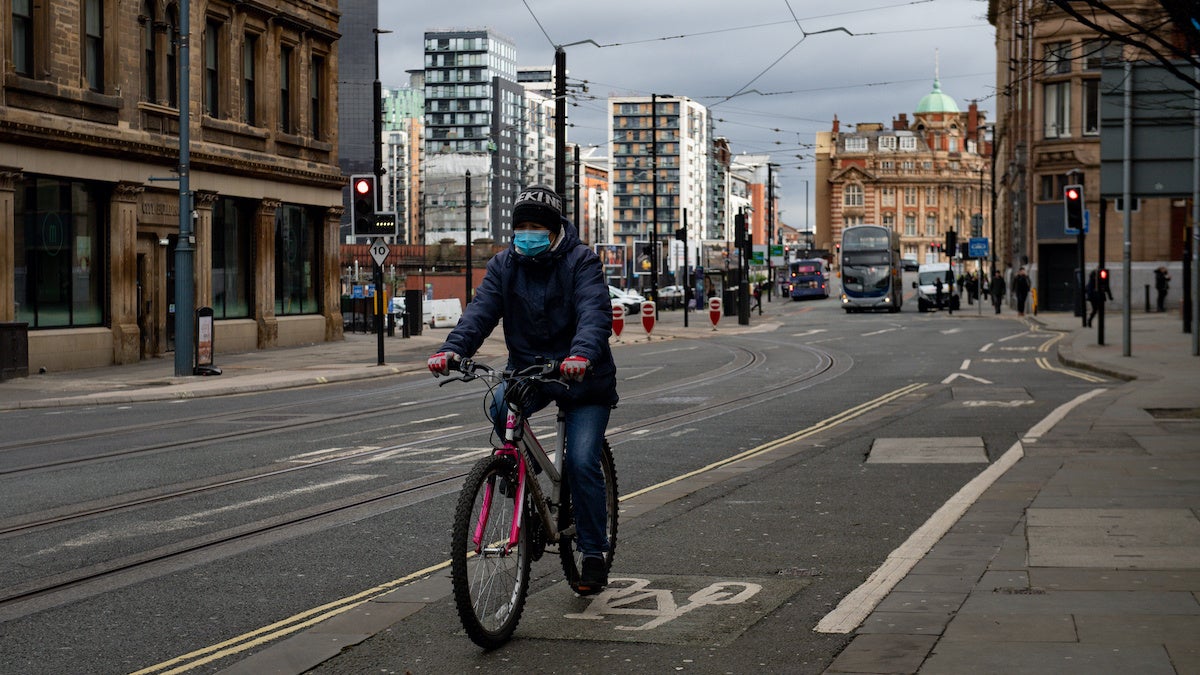 A cyclists wears a protective mask as he cycles through Manchester city center, UK on March 17, 2020. Jacob King / PA Images via Getty Images

Fears of catching coronavirus on public transportation coupled with drops in vehicular traffic has led to a spike in the sales of bicycles, and safer streets to ride on.

In the UK, where emergency service personnel still need to get to work, a cycle-to-work initiative has led to a 200 percent increase in bicycle sales among people working for emergency services, according to the BBC.

However, it is not only emergency service workers hopping on two-wheels. Across Great Britain, the demand for bikes has soared as people look for mobility and exercise amidst lockdown and social distancing orders, as the BBC reported.

Commuters in New York City, the epicenter of the U.S. epidemic, expressed the same concern.

“I’m 51 and healthy, but I don’t want to get on the subway,” said John Donohue, a Brooklyn-based artist who bought a bike two weeks ago, to Reuters. Donohue, who doesn’t own a car, said he’s not sure when he’ll be comfortable on mass transit again.

In Australia, bike shops are struggling to keep up with demand.

“We’re the new toilet paper and everyone wants a piece,” Grant Kaplan, manager of Giant Sydney, a bike store in Sydney, told Guardian Australia. “We can’t keep up with sales. Literally the phone is ringing nonstop.”

The phenomenon has reached the U.S. too, where more and more people are shelling out over ,000 to buy a Peloton to make up for their lost access to gyms, as The New York Times reported.

Peloton has seen its stock soar 95 percent and said its revenue rose 66 percent in the first three months of 2020 from a year earlier. The company ended the quarter with a “backlog” of bike deliveries and added 1.1 million people to digital-only free trials in March and April, according to The New York Times.

“The demand is through the roof,” said John Foley, the chief executive, in an interview, as The New York Times reported. “It’s not just people wanting more bikes, but if they have one, they’re using it more.”

In the U.S., people are also turning to less expensive bikes that offer mobility. Bike shops in Tucson, Arizona have seen an increase in sales and an increase in the number of people coming in to have their bikes repaired.

Roadrunner bicycles in Tucson has seen its sales increase at least fivefold, to an average of about six or seven bikes per day, according to the shop’s owner, Elliot Dumont, as Tucson.com reported. Dumont noted that the bike shop experienced record sales in March.

“It’s a huge increase in entry-level bikes, and a lot more service,” said Cory Foster, who manages another bike shop in Tucson. He has seen a number of purchases for kids’ bikes since children have outgrown their old ones, as well as an increase in repairs from people stuck at home who are dusting off rarely used bicycles, as Tucson.com reported.

The government has declared bicycles an essential transportation item, so many bike shops remain open despite the widespread business shutdown, as Reuters reported. Many, though, have modified how they operate, no longer letting buyers test bikes and handing them over on the curb rather than inside the store.

Bicycle sellers might also have trouble keeping up with demand. Wholesalers are also telling bicycle dealers that they may not have any new inventory until the 2021 models arrive in the middle of July.

However, some bike shops are unable to meet the increased demand because of strict state laws. In Pennsylvania, for example, bike shops are open for repairs but they’re not allowed to sell new bicycles.

“It’s sort of stupid that somebody can come in and buy an innertube, but they’re not allowed to leave with a bicycle,” said Allen Kinkead, owner of a Pittsburgh-based bike shop, as the Pittsburgh CBS News affiliate reported.

In Texas, the bike business is booming, too. “I thought, ‘Wow, this could go either way,'” Ray Atayde, the owner of Ray Jay’s Bike Shop in Dallas, told the Pittsburgh CBS News. “I was very concerned. And it’s just been going like gangbusters around here.”