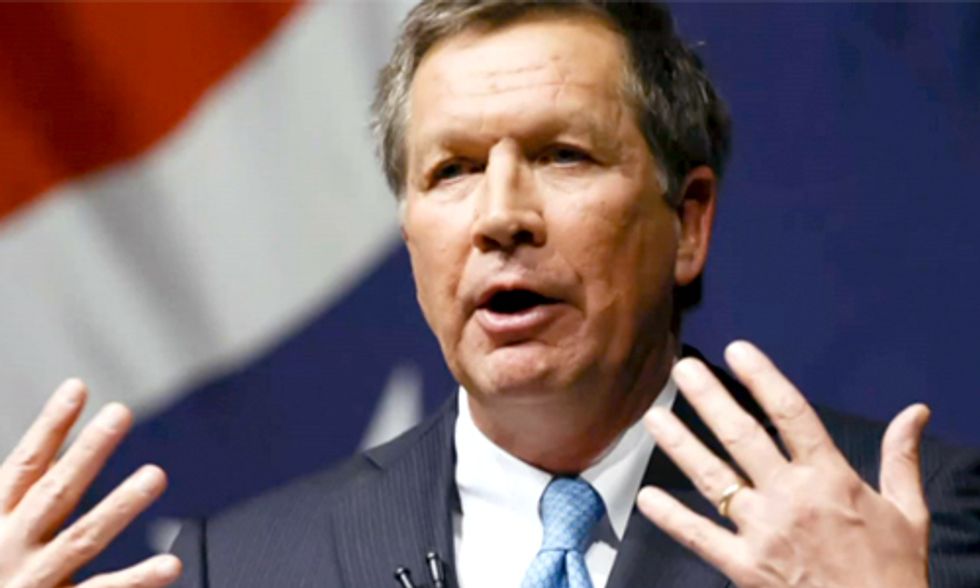 Ohio’s Gov. John Kasich reversed his position on fracking public lands in response to public outcry about the events surrounding recently released information about the state’s collusion with the oil and gas industry to conduct a shady pro-fracking PR campaign. Last week, Gov. Kasich announced that he is opposed to drilling in state parks, but the biggest concerns are still unanswered as a cloud of controversy still lingers.

“It seems Governor Kasich is coming to his senses after being caught up in the ongoing ‘FrackGate’ scandal. The governor now admits that the ‘regulatory structure’ is not ‘mature’ enough to allow fracking in Ohio’s parks."

In 2011, we watched as a state legislature seemingly smitten by the industry passed legislation opening public lands to fracking with handshakes and applause, despite polls showing that 70 percent of Ohioans were opposed. Ohio Sierra Club members and others had risen to the occasion by writing letters and giving testimony, but the Governor signed the bill into law, which at that time seemed to seal the fate for Ohio’s public lands.

In 2012, the Ohio Sierra Club filed the first of many open records requests to the Ohio Department of Natural Resources (ODNR) looking for e-mails between the agency and the industry and how the language of the public lands fracking bill was written. The agency didn’t respond, forcing our first lawsuit (and not our last) simply to obtain public records from the ODNR. One of the things we discovered in those e-mails was that the Ohio Oil and Gas Association had been one of a select few invited to make edits to the legislation as the bill was making its way into state law.

Late last year, amid silence from the administration on the status of opening public lands to horizontal fracking, Ohio Sierra Club filed another public request under Ohio records law. It was this request that yielded the now-famous collusion document as well as the e-mail invite from the Governor’s office that named several targets, including Robert F. Hagan (D-Youngstown), in what the state representative has since coined “frackgate.”

Stories about this will be written and re-written, as the depth of this story is only beginning to be seen. How far down the rabbit-hole the state administration has gone will always be a topic of speculation. Unless, of course, there is an investigation.

There is no question that ODNR is actively silencing and opposing Ohioans concerned about fracking. This is the same agency who recently ignored repeated requests by the citizens of Athens and county commissioners alike who were simply asking for a public hearing about proposed fracking waste disposal wells. The ODNR met citizens in Portage County with armed guards and dogs, giving a brief lecture about the history of oil and gas in Ohio and refusing to answer questions about the wells in question.

Most disturbing, citizens in Darke County (hometown of Director James Zehringer) held expert panel events about fracking, only to have handouts made by ODNR staff discrediting their information delivered to and distributed by the County Commissioners office. Ohio Rep. Jim Buchy (R-Greenville) even made a website that features videos of the ODNR staff discrediting the citizens' concerns alongside Energy In Depth—the industry's new pet PR firm.

How are public funds being used for these purposes? How much state officials' staff time is being used to do PR, and by whom? What is the agency's relationship with Halliburton, America's Natural Gas Association and JobsOhio? When did the ODNR start working with Energy In Depth and what is their relationship?

Where does our state regulatory agency end, and the fracking industry they regulate begin?

State Reps. Hagan and Nickie J. Antonio (D-Lakewood) submitted a letter to Ohio House Speaker William Batchelder requesting legislative hearings and an investigation in to the ODNR's agenda. If House Speaker Batchelder denies these requests, Ohioans will be forced to draw their own conclusions about whether or not the oil and gas industry has infiltrated the public process.

In fact, if there is no investigation, the public has every right to draw some very serious conclusions.

The governor made stunning comments when he announced his reversal. First, that he didn’t believe that the “regulatory framework was mature enough” for fracking in parks. Second, this is why he never appointed the five-member Oil and Gas Leasing Commission before the deadline to approve public lands leases. (About that public lands leasing commission—the nominations were made by the Ohio Oil and Gas Association themselves during an e-mail exchange with the ODNR)

These are two very interesting statements.

“It seems Governor Kasich is coming to his senses after being caught up in the ongoing ‘FrackGate’ scandal. The governor now admits that the ‘regulatory structure’ is not ‘mature’ enough to allow fracking in Ohio’s parks. We agree. But the Sierra Club and our 2.4 million members and supporters understand that what is too dangerous for our parks is too dangerous for other public lands or our backyards. And everyone will agree that public officials shouldn’t be colluding with the oil and gas industry to force fracking down our throats.”

This is the real crux of the governor's position. It explains why he's holding off on making appointments to the leasing commission. It also explains why he left himself an out when he said he "holds the right to revisit" his opposition to fracking public lands. He's using Ohio's public lands as a bargaining chip.

Yes, it's indeed a dubious business to dance with the fracking industry. Disclaimer: severance taxes on extractive industries aren't necessarily a good thing.

So, what's all of this severance tax business about anyway? Well, it's actually really important and it's become a very serious problem for the governor, though no one seems to be talking about how FrackGate and the severance tax are very much connected (except for Tim Kovach).

While already fighting an uphill battle to show job growth from fracking is anywhere near par with projections—Kasich is being outright stifled in his efforts to draw even a modest tax on the industry and follow through on his promises for Ohioans to actually benefit from fracking. Disaster struck for Kasich when Speaker of the House William Batchelder soundly defeated the Governor's severance tax proposal that would have lowered income taxes for Ohioans and at least partially resolved significant questions about Ohio's budget. All of that despite the fact that the Governor's bill would have kept Ohio's fracking tax among the lowest in the nation.

Batchelder immediately came back with Ohio Oil and Gas Association's own trojan horse severance tax, that marginally increased the tax from 2 percent to 2.25 percent, but grants other tax subsidies which the Ohio Legislative Service Commission shows would amount to an $8.5 million dollar loss for the General Revenue Fund, including a $1.1 million dollar loss to the School District Property Tax Replacement Fund. If passed, Ohioans would lose out on any actual benefit from fracking, period. Kasich is being just plain out-dueled by his radical counterparts in the statehouse and their friends at the Ohio Oil and Gas Association.

Oddly, the governor might be in a ripe position to fight back. A moratorium on drilling and a full investigation of ODNR's relationship with industry would certainly get their attention.

One thing is for certain—FrackGate has Ohio on notice, and the people are watching.