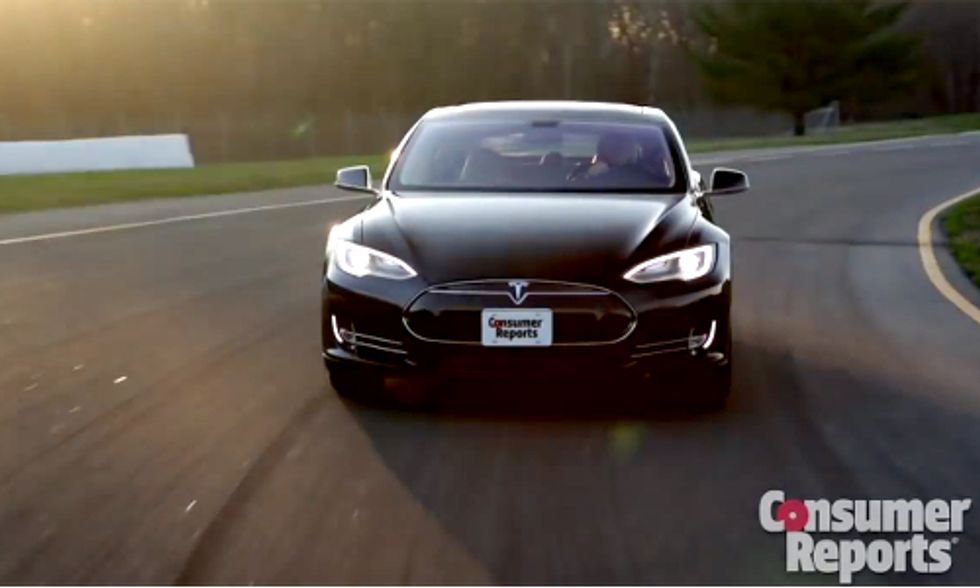 The award comes just weeks after Tesla Motors publicized the journey of two Model S cars from New York to Los Angeles that sought to exemplify the reliability of electric vehicles (EV). Here's what Consumer Reports had to say about its top choice for 2014:

Sure, you can talk about this electric luxury car’s blistering acceleration, razor-sharp handling, compliant ride, and versatile cabin, which can fit a small third-row seat. But that just scratches the surface of this technological tour de force. The Tesla is brimming with innovation. Its massive, easy-to-use 17-inch touch screen controls most functions. And with its totally keyless operation, full Internet access, and ultra-quiet, zero-emission driving experience, the Tesla is a glimpse into a future where cars and computers coexist in seamless harmony. Its 225-mile driving range and 5-hour charges, using Tesla’s special connector, also make it the easiest, most practical, albeit pricey, electric car to live with.

Consumer Reports bases its ratings on test performance, reliability and safety. Despite reports of battery fires that kept Tesla in the news in 2013, Jake Fisher, auto test director for Consumer Reports, said his staff has not observed any issues with the batteries or drivetrains of the 600 models the magazine has data on.

Watch the Model S review at the tail end of this 2014 Top Picks video.

Clearly, the ranking is a big win for Tesla and CEO Elon Musk, but it's also huge for the EV industry as a whole. It only builds on the trust Tesla continued building with the cross-country trip. About 65 percent of Americans already say EVs are essential to our future, and this can only help.

The rankings also listed the Toyota Prius as the year's "Best Green Car." This marks the 11th year in a row that Toyota claimed the honor.