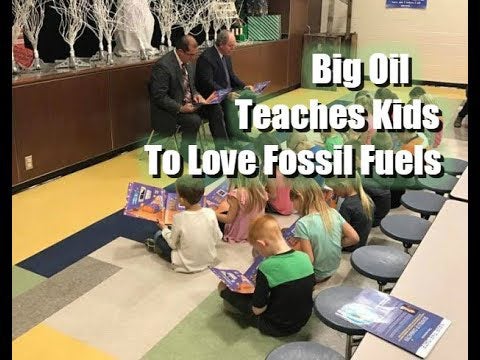 The “Oil to School” pipeline, the fossil-fuel industry’s effort to pour pro-petrol propaganda into K-12 classrooms, is more widespread and pernicious than previously thought, a new investigation has shown.

Big oil can exploit the fact that schools are underfunded, and provide resources and then take the opportunity to write the resources which somehow manage to omit the dangers of climate change and pollution.

The results are story book characters like “Petro Pete” who warn of the catastrophe life would be without the help of the mighty oil and gas industry.

Schools in red states and schools with a strong oil-to-state government relationship like Oklahoma are particularly susceptible. These thinly veiled advertisements for oil corporations masquerading as education will create a generation of Americans who lack a thorough understanding of science, but worse, swear allegiance to an oil barrel.