Big Oil Bullies and a Test of Wills 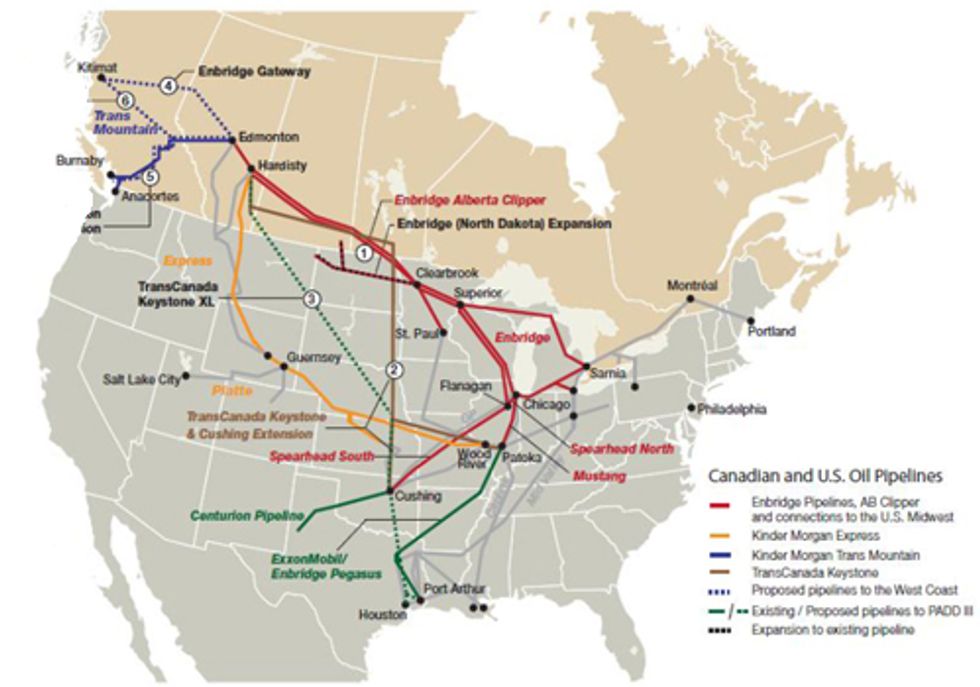 In November, President Obama listened to the nation's top climate scientist and to bipartisan voices along the route of the proposed Keystone XL tar sands pipeline from Canada to the Gulf of Mexico, and declared that the project required further review. After all, the Keystone XL's predecessor (another tar sands pipeline just called Keystone) had leaked a dozen times in its first year. Tar sands oil is highly toxic, dangerous to transport, and almost impossible to clean up. In Canada itself, strong public opposition has delayed tar sands pipeline proposals for additional environmental review and public comment.

But that kind of prudence didn't sit well with Big Oil, which is used to getting its way. (Remember, it was lax regulation that allowed BP to drill a shoddy, dangerous well in the Gulf of Mexico that they didn’t even know how to cap when it exploded.) So Big Oil rolled out its army of lobbyists and PR experts—among the most elaborate and expensive lobbying operations in America. The head of the American Petroleum Institute publicly promised "huge political consequences" if President Obama doesn't grant immediate permission for the pipeline. More saber rattling followed in TV ads and from the most powerful business lobby in Washington, D.C., the U.S. Chamber of Commerce (which is bankrolled largely by… Big Oil).

They didn't just issue threats. Big Oil also commanded its $12 million posse in Congress to get to work. The minions rallied to the call, promoting Keystone XL as a top cause célèbre for 2012. House Speaker John Boehner kicked things off by holding the paychecks of working Americans hostage to a rider to the Payroll Tax Cut package in an attempt to force Keystone XL through.

That legislative rider has imposed a 60-day deadline on the president's decision, despite the inadequate and incomplete review, and despite the lack of a route through Nebraska. Any permit issued now would be a blank check written to an oil company with a proven record of disregarding the rights of the American farmers and ranchers whose land the pipeline would cross and threaten.

Given the billions in oil profits that are at stake, none of this should be surprising. But since few Americans actually care about increasing the oil industry's already bloated profits, its lobbyists have also been working overtime to sugarcoat the Keystone XL project with exaggerated promises of jobs. It's a smart, if cynical, tactic. Everyone wants jobs. Unfortunately, this pipeline would generate far fewer construction jobs than promised and only a few hundred permanent jobs.

Look behind the curtain and the real story here is the $2 billion to $3.9 billion more in profits each year that Big Oil would collect simply by being able to raise gas prices in the Midwest by between ten and twenty cents—hurting Americans and chilling economic growth. Meanwhile, the Canadian crude being pumped 1,700 miles across six states, through farms and ranches, and directly over the water supply for millions of Americans would actually be destined for export from refineries in a Texas free-trade zone—meaning billions more in oil profits that American workers would never see.

What Americans would see and experience is the pollution. We would be opening a Pandora’s box of climate pollution. We would be threatening the fragile drinking water supplies for millions. We would be putting the livelihoods of American farmers and ranchers in six states at risk. And all the while, oil companies alone would reap the profits—which they'd largely keep in exorbitant salaries and stock bonuses, minus their continued investment in political influence.

By any objective measure, the Keystone XL pipeline is a patently bad idea that could never withstand rational scrutiny. Ultimately, this is a test of wills. Can the president stand up to threats from the wealthiest industry in the world? Big Oil has the money to inflict serious damage on anyone who challenges its singular goal—profits. If President Obama does the right thing, he will also be doing a brave thing. But it would also be the smart thing: Standing up to bullies is, in the long run, almost always a good call.

We are hopeful, confident even, that the president will put the American people before Big Oil's profits. And we're also hopeful that Americans will start demanding far better from their Congress by insisting that our representatives stop selling their votes for campaign contributions. It's time to separate oil and state.

We need to break our addiction to oil, and we need to get oil companies out of our politics. Now that Big Oil has thrown down the gauntlet with Keystone XL, President Obama has a remarkable chance to start accomplishing both of those goals.