Big Oil Splutters — How Will It Survive the Energy Transition? 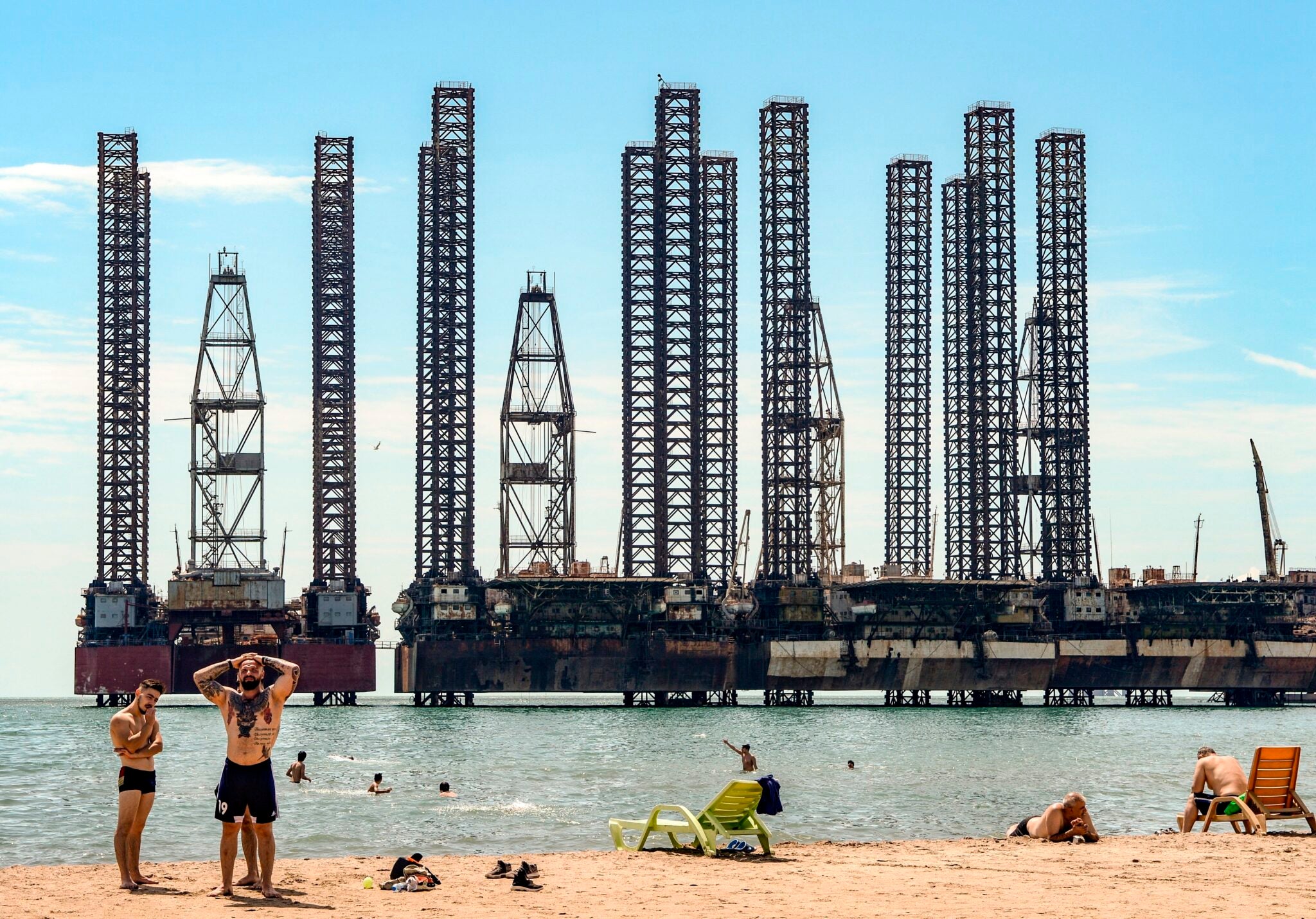 Men rest on a beach on the shore of the Caspian Sea in front of oil rigs following the easing of strict quarantine measures against the spread of the coronavirus disease in Baku on August 5. TOFIK BABAYEV / AFP Getty Images

In April, the price of oil turned negative for the first time in history, just after the coronavirus pandemic hit. As lockdowns were ordered across the world, demand for black gold plummeted, prompting producers to literally pay buyers to take the commodity off their hands.

The price collapse was exacerbated by the Saudi-Russian price war which blew up around the same time, after Moscow refused to moderate oil production to keep prices at a reasonable level. Overproduction, particularly by US shale producers, amplified the effects of the worst oil crisis in decades.

In the first nine months of this year, Shell, Exxon Mobil, Chevron, BP and Total made a total loss of $36.4 billion (€30.6 billion), compared with last year’s $50 billion in profit. As investors took flight, the oil majors were forced to slash costs.

Exxon, once the world’s largest publicly traded oil and gas company, said in the summer that capital expenditure would shrink by 20%, and just last week, announced it would cut 15% of its workforce — shedding some 50,000 jobs. Chevron, Royal Dutch Shell, BP and others have made similar moves, with most slashing investor dividends for the first time in years.

“The next few years are going to be very difficult,” Helal Miah, investment research analyst at The Share Centre, told DW. “But the oil majors have done it before. During the financial crisis, these companies were very good at slashing costs.”

Dozens of smaller firms, however, will struggle to survive. The New York Times reported that more than 50 North American oil and gas companies had already sought bankruptcy protection this year. Many of them took huge risks and even bigger loans to try to compete with the majors.

This fall, the second wave of the pandemic has forced renewed lockdowns across Europe and will likely prompt a more robust response from US President-elect Joe Biden, who has vowed to create a pandemic task force as soon as he takes office in January. Those measures could cause a further shakeout.

“The longer the pandemic goes on, the more we’ll see the smaller and mid-cap sized oil companies go under, or be taken over by the larger ones,” Miah added.

Peak Demand or Bottom of Cycle?

Some analysts believe global oil demand may have already peaked, while others believe that if oil prices haven’t already, they are close to bottoming out. Seven months on from the unprecedented negative oil price shock, West Texas Intermediate (WTI) crude, one of the benchmarks for calculating oil prices, stood at .15 on Monday.

The price is still 67% lower than its 2014 peak of 4 a barrel, but closer to the that most large oil companies need to break even. Exxon needs prices of around , according to analysts. All the same, the oil majors are not expected to reach their pre-COVID profitability levels until at least the end of 2022.

Already facing pressure to lead the energy transition and help the world ween itself off its fossil fuel addiction, oil giants have vowed to exploit the crisis to speed up investments in renewable energies.

“Prior to COVID this [energy transition] was a gradual trend,” Peter Hitchens, oil analyst at the London-based Progressive Research, told DW. “The question is will COVID accelerate this trend?”

European firms like France’s Total, the UK’s BP and the Anglo-Dutch giant Shell have already begun to prioritize renewable energy, and plan to reduce greenhouse gas emissions to net zero by 2050. BP and Shell have announced major offshore wind projects this year.

US Oil Giants Shield by Trump

Their US counterparts, on the other hand, have enjoyed protection from outgoing US President Donald Trump’s climate skepticism and continue to focus on their traditional oil and gas businesses. If the Biden administration reenters the Paris Climate Agreement, from which Trump withdrew six months after taking office, it will likely put pressure on American oil majors, although it is unlikely to curtail the drilling for hard-to- reach oil through fracking.

Biden has also hinted at building ties with OPEC members Iran and Venezuela, which are currently subject to harsh sanctions on their oil trade. The Democrats’ plan for a huge infrastructure plan, dubbed the Green New Deal, to meet the climate change challenge will still require oil prices to be high enough to make clean energy alternatives to fossil fuels competitive.

Despite their moves to step up investment in renewables, the Share Centre’s Miah sees oil firms still mostly profiting from fossil fuels in the medium term,

“If we look a decade ahead, I would say that they will still be majority oil and gas companies rather than renewables-focused,” he told DW. He added that most investors still see oil as a sensible way of achieving “good, solid returns.”

Some major London-based institutional investors have taken a different view, however. Asset managers Fidelity International and Sarasin & Partners have blacklisted the likes of Shell and BP over concerns that the green shift will cripple profits.

Last month, the Daily Mail reported that several asset managers have written to the oil majors requesting full transparency on the true value of their assets, including oil fields, which they claim could be rendered worthless if a slump in oil demand became more permanent.

Others, like Hitchens, see the fortunes of the oil industry tied in with the duration of the pandemic and how quickly oil demand recovers, once business and everyday life return to normal.

“The performance will very much reflect the movement in oil prices” and “very much depends on the economic recovery after COVID,” he told DW.

Other analysts are more bullish and think big oil firms, with their deep pockets, have the strength to ride out their worst crisis. They say they’ll likely acquire renewable energy firms and continue to thrive despite likely flat oil demand.