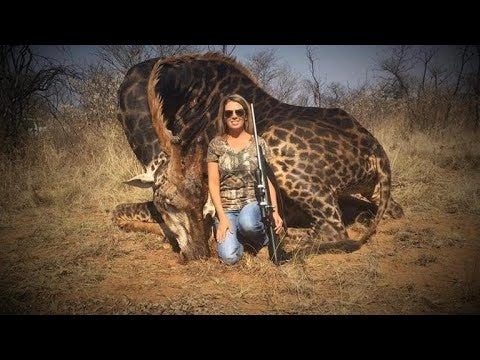 Tess Thompson Talley of Kentucky has sparked public outcry after photos of her proudly posing with a black giraffe she killed in South Africa last year went viral.

The big game hunter posted images of the June 2017 hunt onto her social media page. Then last month, the South Africa-based news outlet Africland tweeted out the images with a missive describing Talley as a “White American savage” for shooting down the “very rare” animal.

White american savage who is partly a neanderthal comes to Africa and shoot down a very rare black giraffe coutrsey of South Africa stupidity. Her name is Tess Thompson Talley. Please share pic.twitter.com/hSK93DOOaz

Talley’s original post of the photos, which she has since deleted, contained the caption: “Prayers for my once in a lifetime dream hunt came true today! Spotted this rare black giraffe bull and stalked him for quite a while. I knew it was the one. He was over 18 years old, 4000 lbs. and was blessed to be able to get 2000 lbs. of meat from him.”

The images have drawn global outrage, including searing criticism from comedian and animal advocate Ricky Gervais, who wrote on Twitter that the African giraffe population has dropped significantly and face extinction. About 100,000 are left on the continent.

Giraffes are now on the 'red list' of endangerment due to a 40% decline over the last 25 years. They could become extinct. Gone forever. And still, we allow spoilt cunts to pay money to shoot them with a bow and arrow for fun. pic.twitter.com/Tu6uxgp7se

Talley has defended herself, telling CBS News in a statement that the hunt was legal and permitted and the giraffe was more than 18 years old and “beyond breeding age, yet had killed 3 younger bulls … Now that the giraffe is gone, the younger bulls are able to breed.”

“This is called conservation through game management,” she said.

Paul Babaz, the president of the hunting advocacy group Safari Club International, also defended Talley. He said that the fee for a hunting giraffe is about $2,000 to $3,000 per animal, which provides financial help for the local community.

“Without that … the poachers will come in and kill the animals indiscriminately, which is very unfortunate,” Babaz told CBS News.

Gervais previously wrote in a 2015 Facebook post that he’s “sick of trophy hunters trying to excuse their grim sport by saying they provide a service.”