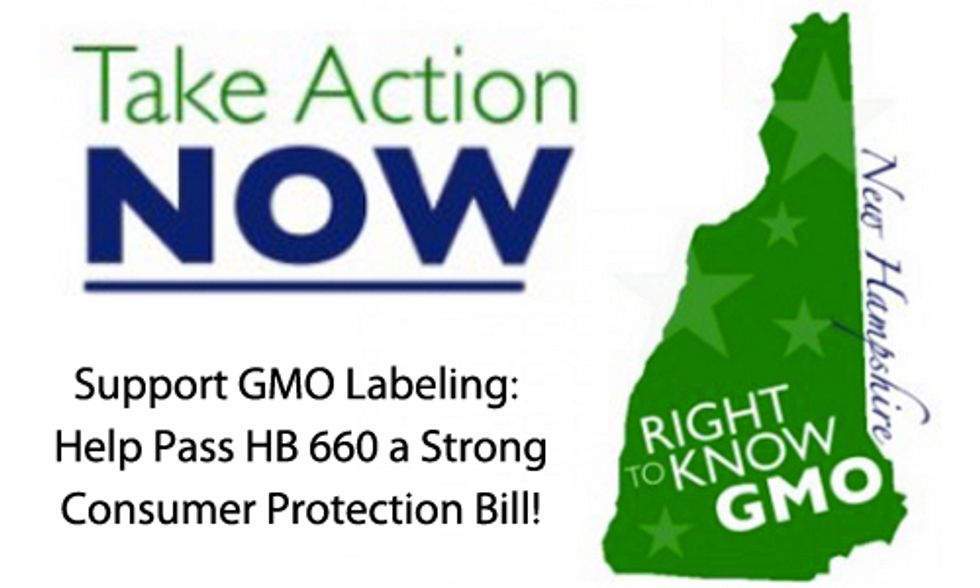 In secret documents that I uncovered in November, the Grocery Manufacturers Association (aka food industry lobbyists) laid out its five-point plan for opposing the labeling of foods containing genetically modified organisms or GMOs. First on the list: “To oppose all state efforts that would impose mandatory labels” including state legislation. With more than 20 states having introduced state bills to require GMO labeling, the junk food lobby has its work cut out for it. But they’ve wasted no time as the 2014 legislative session gets underway, starting with targeting the New Hampshire capital.

The bill to require GMO labeling in New Hampshire was first introduced last winter, but was sidelined to a subcommittee for “study” and is now back on track. Groups opposed to the measure include local lobbyists such as the New Hampshire Grocers Association, but also several national players  like Monsanto, Biotechnology Industry Organization, and of course, the Grocery Manufacturers Association (GMA). That explains the shady tactics starting to emerge.

Last Wednesday a hearing was scheduled in the House of Representatives where industry was handing out two documents at the door:

Industry lobbyists also paid for a full-page advertisement that ran in several local newspapers making the same arguments as above with the same inflated list of signatories. Alexis Simpson is the GMO Labeling Campaign Coordinator for New Hampshire. She wasn’t surprised to see the Grocery Manufacturers Association show up in Concord, since she has been following the group’s actions in other states. She told me, “GMA’s latest response to mandatory state labeling is to offer preemptive voluntary labeling. That language is now in the culture thanks to GMA.”

If you haven’t been following the battle over labeling of GMO foods then you probably never heard of the Grocery Manufacturers Association. And you may not realize just how nasty a game they play. The GMA is a powerful trade organization based in Washington D.C. that lobbies on behalf of the largest and most powerful food and beverage conglomerates including Coca-Cola, PepsiCo, Nestle, Kraft and General Mills. Over the past few years, GMA has become a key player in the fight over labeling GMO foods. In California in 2012, the biotech and junk food industry combined spent more than $45 million to defeat a ballot initiative there. The opposition engaged in numerous dirty tricks including lying in the official voter guide, misrepresenting its expert’s academic affiliation and making false deceptive arguments that were not backed up by any evidence.

Then last year in Washington State’s ballot measure fight over GMO labels, the Grocery Manufacturers Association took its shameful strategy to whole new level. Not content to just engage in unsubstantiated scare tactics to win over voters, the GMA went so far as to break the law. Just two weeks before Election Day, Washington State Attorney General Bob Ferguson filed a lawsuit accusing GMA of violating the state’s campaign disclosure laws, alleging that the trade group secretly gathered more than $7 million from its members to oppose the GMO labeling measure, failing to disclose the actual funders to voters. (The final figure was $11 million, half the total spent to oppose the measure.) As internal documents revealed, GMA had the chutzpah to a designate a special account designed to hide corporate donations. Dubbed the “Defense of Brand Strategic Account,” by the lobbyists, millions of dollars would be budgeted for a “multi-pronged approach” to fight labeling laws in the states, including your state.

The whole idea behind a trade group like GMA is to shield members from bad PR, so popular brands like Coca-Cola and Frito-Lay can keep their noses clean. That’s why, as GMA CEO Pamela G. Bailey explained in internal memorandum, a plan to “better shield individual companies from attack” was hatched. GMA hoped to keep this all secret, but it backfired. Washington State’s Attorney General said the case represented “the largest amount of money ever concealed in an election.” But wait, there’s more. Instead of just taking its lumps for getting caught breaking the law, instead GMA is suing the state back, claiming the disclosure law is invalid, and filing a separate civil rights claim to boot. Chutzpah doesn’t even begin to describe the arrogance here.

GMA is also taking its fight to the federal level. That was supposed to be a secret too, until documents leaked to Politico revealed the junk food’s lobby’s arrogant plan to take away state’s rights to require GMO labeling, putting its place a weak, voluntary scheme at the federal level. Note to the New Hampshire state legislature: Do not believe talk of movement on GMO labeling by the feds. We need more states to take action, to send the message that food makers must be legally required to provide transparency about their products.

GMO campaign leader Alexis Simpson doesn’t think New Hampshire’s representatives are very impressed by DC-based lobbyists. GMA and the Biotechnology Industry Organization co-hosted a breakfast prior to last Wednesday’s hearing, but that probably won’t sway New Hampshire pols. The state’s House has 400 representatives which makes it challenging for multi-national corporations to lobby. As Simpson explains, “This makes for a difficult environment for the GMA. We hope our Citizen Legislature will listen to the overwhelming majority of their constituents who want mandatory labeling.”

The next hearing is scheduled for this Wednesday. You can help support New Hampshire’s bill to label GMO foods by taking action at Food Democracy Now!