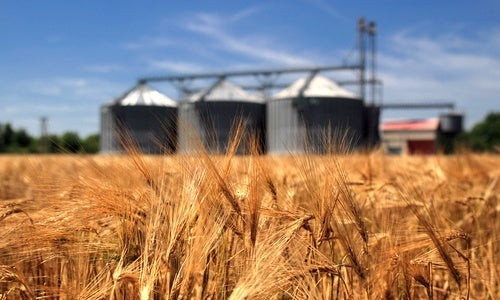 What comes to mind when you think of sustainable food production? If you’re like many Americans, you probably picture a local farmer’s market, celebrity-branded salad dressing or an organic farmer growing heirloom lettuces and free-range chickens. 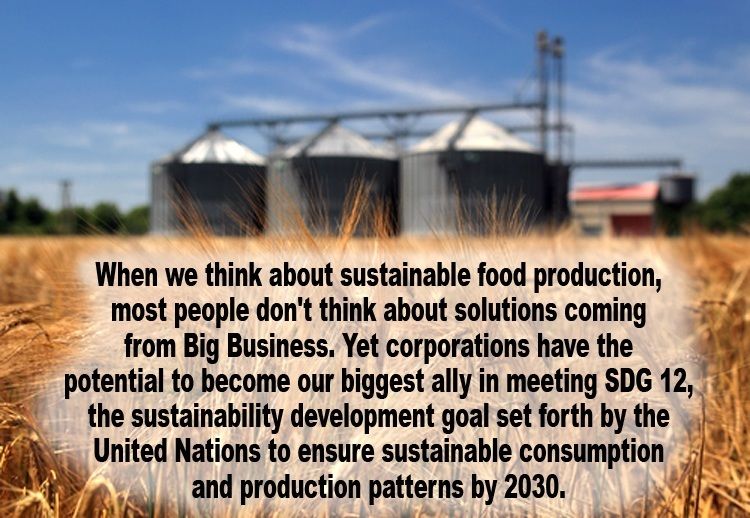 Now, what comes to mind when you think of industrial food production? Do you envision acres of conventionally grown corn stretching as far as the eye can see? Giant feed lots? Factories that process food into “center aisle” products for the supermarket?

When we think about sustainable food production, most people don’t think about solutions coming from Big Business. Yet corporations have the potential to become our biggest ally in meeting SDG 12, the sustainability development goal set forth by the United Nations to ensure sustainable consumption and production patterns by 2030.

Our need to eat poses serious threats to the natural systems that sustain us. Whether it’s small and organic or large and conventional, farming of both livestock and crops already uses up nearly 40 percent of Earth’s non-ice surface and is responsible for 14 percent of global greenhouse-gas emissions—more if you count the GHG emissions caused by deforestation, which has largely been driven by agricultural expansion. Agriculture also consumes 80 percent of the world’s freshwater supply and pollutes waterways with fertilizer and manure runoff.

Of all cropland planted, a relatively small portion is used to grow fruits and vegetables—the food we buy at local markets and grocery stores.

The majority of cropland is devoted to growing commodity crops, such as corn, wheat, soy and palm oil—the stuff that goes to fatten up livestock or become ingredients in prepared foods like bread, soups, tofu and other products like biofuel.

The Environmental Impact of Commodity Crops

As demand for these crops has risen, so too has their impact on the environment. Demand for palm oil, for example, has led to widespread deforestation in South America and Asia. Overuse of fertilizer, particularly on nitrogen-hungry grain crops, has contributed substantially to more than 400 dead zones worldwide, including the biggest one in the Gulf of Mexico.

Consumers can play a role in reducing demand for these crops by changing their diets to include more fruits and vegetables and less meat and processed foods. Governments also have a role to play. But corporations are in the best position to influence commodity-cropping practices on the ground. After all, growers produce what the market wants, and business is driving the market.

How Business is Driving Change

The good news is that corporations are starting to wake up. Companies are beginning to identify unsustainable agriculture as a business risk, and they’re shaking up their supply chains.

In Brazil and Indonesia, for example, companies that control the production of four commodities—more than 90 percent of soy purchases in the Amazon, around half of cattle slaughter in the Brazilian Amazon and 96 percent of palm oil trade globally—ave committed to stop deforestation.

Walmart, as part of its commitment to reduce 20 million metric tons of greenhouse-gas emissions from its supply chain (equivalent to taking 4.2 million cars off the road), has inspired 15 leading suppliers to source fertilizer-efficient grains. Fifteen may not sound like much, but together these companies represent 30 percent of the North American food and beverage market and include some pretty big names, like General Mills and Campbell’s Soup. Their commitment to meet Walmart’s mandate has produced a cascading effect, motivating at least one agricultural retailer—United Suppliers—to develop a fertilizer-efficiency and soil-health initiative that promises to transform 10 million acres of farmland in the next five years.

And last year, several agribusinesses, insurance companies and food retailers joined the newly established Global Alliance for Climate-Smart Agriculture, marking the first time that corporations had a seat at the UN’s table to discuss sustainable agriculture.

By 2050, the world’s population is projected to rise to 9 billion, which will require a 60-percent increase in food production. If we are going to meet that need, we’ll need to grow more food in ways that improve the economy and the natural systems that sustain us all.

Most of the gains in organic farming have been made in the fruit and vegetable department. And that’s a good thing. But to achieve results at scale and meet the goals of SDG 12 on time, we’ll need to engage Big Business. I’m encouraged by what I see.