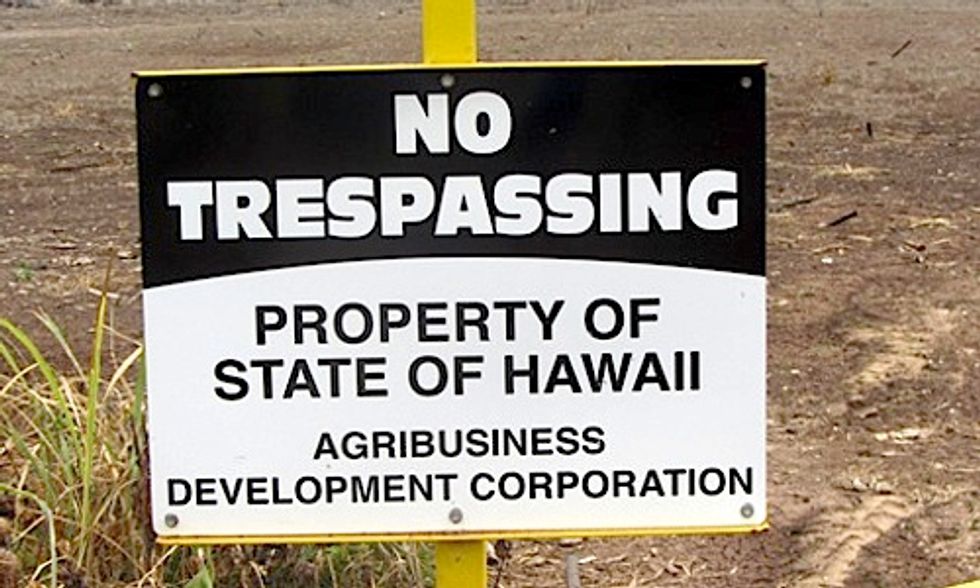 As was expected, Big Biotech’s legal juggernaut has rolled into action in Hawai’i. On Friday afternoon, three big agrochemical companies—Pioneer-DuPont, Syngenta and Agrigenetics Inc. (a subsidiary of Dow Chemical)—filed a suit in a federal court in Honolulu seeking to block Kaua’i County’s new genetically modified organism (GMO) regulatory law. Two other big agribusiness concerns on the island that will be affected by the law—Kaua’i Coffee and BASF—haven’t joined the suit.

Dust drift from tilling on a Dow Agrosciences field in Kauai. Many island residents are concerned about the health and environmental impact of the large volumes of pesticides being used in fields being cultivated by biotech companies. Photo credit: Samuel Morgan Shaw /Earth Island Journal

The law, Ordinance 960 (formerly known as Bill 2491), was passed in November after surviving a veto by Kaua’i Mayor Barnard Carvalho. It requires agricultural companies and large farms to disclose the type and volume of pesticides they are spraying and the location of their genetically modified crop fields. It also requires the companies to set up buffer zones between fields growing GM crops and public places like schools, hospitals and parks. The law is scheduled to go into effect Aug. 16.

A similar regulatory bill was introduced on the island of Maui in December, just days after the mayor of Hawai’i Island, Billy Kenoi, signed into law a bill restricting biotech companies and farmers from growing any new genetically modified crops on that island.

Hawai‘i has turned into the latest battleground of the conflict over genetically modified crops. There’s been a growing grassroots opposition against the five big biotech companies—Monsanto, Syngenta, DuPont, Dow Agrochemicals and BASF—that have been expanding their operations here, occupying tens of thousands of acres of former sugar and pineapple plantation lands to grow and test transgenic seeds. Hawai‘i currently has the largest number of experimental GMO crops in the U.S.

The lawsuit against Kauai is clearly the biotech industry’s first retaliatory salvo against the series of legal initiatives to to curb their activities on the islands.

The 84-page suit claims that the Kauai law was explicitly drafted “to discriminate against GM seed farming operations on Kaua’i” and that it violates their federal and state constitutional rights to equal protection and due process.

“Bill 2491 irrationally prohibits Plaintiffs from growing any crops, whether genetically modified or not, within arbitrarily drawn buffer zones inapplicable to other growers, and restricts Plaintiffs' pesticide use within those buffer zones,” the suit states. It says that if the companies are forced to reveal the location of their transgenic crop fields they will face the risk of “commercial espionage, vandalism and theft” and that all these “burdensome operational restrictions and civil and criminal penalties” have no legal justification and would hurt their businesses economically. It says the bill was “tailored to avoid impacting others who use pesticides on Kaua’i to grow non-GM crops and for other purposes.”

Paul Minehart, a Syngenta spokesman told Reuters that the ordinance attempts to regulate activities over which counties in Hawaii have no jurisdiction. “These activities are already regulated by governmental agencies under state and federal laws," he said.

The biotech companies mainly grow seed crops on the island, including soybean, canola, rice and seed corn—which is Kaua’i’s number one crop. But they also have trial plots where they test genetically modified seeds for pesticide resistance. Hawaii’s warm climate allows for three corn crop harvests in a year, which makes it a perfect place to experiment with seeds. The companies say Kaua’i’s climate gives them the "the invaluable opportunity to triple or quadruple the pace of development of GM crops."

It’s this “triple or quadruple pace of development of GM crops” that has been of increasing concern to many islanders and what led to the passage of the bill in the first place.

Many residents, especially those living on the west side of the island where most of the biotech companies’ fields are located, are deeply concerned about the health and environmental impact of the large volumes of pesticides used these fields. Three-to-four crop harvests a year, they say, means a tripling or quadrupling of the amount of pesticide used—way over what’s used in fields, GMO or otherwise—on typical farms. Many local doctors and nurses, teachers and parents are especially worried that exposure to pesticides is harming children.

On several occasions between 2006 and 2008, students and teachers at Waimea Canyon Middle School, which is near a Syngenta field, complained of noxious odors. In one instance the school had to be evacuated and some children were sent to the hospital. Some doctors say the region seems to have unusually high rates of asthma, cancer and birth defects. However, there have been few studies investigating these allegations and the cause of the students’ ill health. (The lawsuit uses the lack of health impact studies to claim that Ordinance 960 is not “based on sound scientific data or a thorough risk assessment”).

Kaua’i Councilman Gary Hooser, who co-authored the bill, says it was drawn up because despite repeated requests from residents the companies either withheld information, or outright lied, about their agricultural practices.

“I expected it and I didn’t,” Hooser said on Saturday, referring to the lawsuit. “In a way, I expected them to honor the democratic process also. It should have been predictable given their history of being corporate thugs around the world, but I tend to optimistic.” He said a team of environmental lawyers, including attorneys from EarthJustice and Center for Food Safety, who’ve promised to fight the case for the council pro bono, “are confident that the law is defensible and solid.”

Paul Achitoff, a Honolulu-based attorney with EarthJustice, says the lawsuit’s arguments aren’t legally sound. “They have a very long list of complaints. Basically they’ve thrown everything up against the wall hoping something would stick,” he said. “Of course you never know, a judge might buy one of the arguments.”

On Saturday, some Kauaʻi residents expressed frustration that while the companies acknowledged the benefits of business on Kauaʻi, they have been unwilling to address people’s concerns.

“As a west side resident who is surrounded by the test fields of these companies, it is my basic human right to know what they are exposing me and my family to on a regular basis. Their actions prove that they do not value the health and well-being of our community, and are only interested in their corporate profit,” Malia Chun, a local educator and community activist, said in a statement.

In their lawsuit, the biotech companies allege that: “Bill 2491 will cause damage to Plaintiff’s goodwill and reputation.” Seems to me the companies are doing a pretty good job of doing that damage to themselves. Big corporations suing a small island council that’s trying, in good faith, to protect its people—not the best PR move, is it?

[Authors note: Syngenta has so far not responded to my interview requests. Neither has anyone from the Hawaii Crop Improvement Association (HCIA) that represents the biotech seeds industry. Back in December, Mark Philipson, corporate affairs chief at Syngenta, Hawaii and HCIA president, had this to say in response to my interview request: “Syngenta Hawaii strives to respond to local and major mainstream news media requests for information. Due to our level of resources, we cannot always respond to other media outlets and do not provide facility tours.” He did say he would answer specific questions if I emailed them to him. I’ve done so, asking him to respond in his capacity as HICA president. I am awaiting his reply. However, the lawsuit answers most of the questions I'd asked him.]