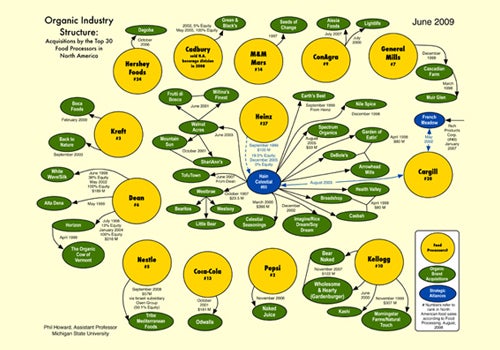 On June 21 the U.S. Department of Agriculture (USDA) formally announced it is seeking nominations for an opening on the National Organic Standards Board (NOSB), a 15-member panel set up by Congress responsible for approving all non-organic/synthetic materials in organics and recommending regulatory policy. Past appointments of agribusiness executives, to seats reserved for farmers and other independent industry participants, have been widely criticized.

The Cornucopia Institute, an organic industry watchdog, has once again sent a letter to USDA Secretary Tom Vilsack requesting, as the department had done in the past, that he make the names of all nominees public so that the organic community can assure that the “best and brightest” are chosen.

“Many citizens who thought they were voting for ‘change’ when President Obama was elected have been sorely disappointed when it comes to ignoring the law, and the will of Congress, in terms of governance at the National Organic Program,” said Mark A. Kastel, codirector and senior farm policy analyst at Cornucopia.

The Cornucopia Institute, a farm policy research group, based in Cornucopia, Wis., is preparing to challenge the Obama administration’s past inappropriate board composition in federal court. Earlier this month it filed a formal complaint with the USDA’s Office of Inspector General (OIG), Phyllis Fong, asking her to investigate the organization’s allegations.

In its complaint, Cornucopia cited NOSB member Carmela Beck as an example. Ms. Beck was appointed last year by USDA Secretary Vilsack to serve on one of the seats reserved for an individual who “owns or operates” an organic farm. Ms. Beck neither owns nor operates an organic farm, but is a full-time employee of a giant privately-owned agribusiness, Driscolls, the largest conventional and organic berry producer in the U.S.

“This is a clear-cut violation of the Organic Foods Production Act of 1990 (OFPA), in which Congress charged the USDA with protecting organic stakeholders and consumers,” explained Kastel.

Complaints of this nature by industry stakeholders are not new. During the Bush administration an employee of the agribusiness giant General Mills was nominated to a seat on the NOSB reserved for a “public interest” or consumer representative.

In that case, the blowback received was instantaneous and so pronounced that her name was withdrawn. She was later appointed to a seat reserved by Congress for a “scientist.”

“Even if the General Mills employee qualified as a scientist, and she had a food science degree, it was obvious, when Congress set two seats aside for industry handlers/processors that the majority of the board seats were meant to be reserved for independent voices from the organic community, not corporate shills,” Kastel added.

Cornucopia alleges that the illegally constituted board, with its agribusiness bias, has resulted in a number of dangerous or questionable synthetics being approved for use in organics.

At its last meeting, the NOSB, by a one-vote margin, re-approved carrageenan, a stabilizer and thickener derived from seaweed. Carrageenan has been linked to gastrointestinal inflammation, which can lead to serious intestinal disease, including colon cancer. “Degraded carrageenan,” which appears to contaminate all food-grade carrageenan, is classified as a “possible human carcinogen” by the International Agency for Research on Cancer of the World Health Organization (WHO) and the National Academy of Science in the U.S.

“If there were ever a poster child for an ingredient that has no business being in organic food, or any food for that matter, it’s carrageenan,” said Charlotte Vallaeys, Director of Farm and Food Policy at Cornucopia.

In its report, The Organic Watergate, issued in May, Cornucopia documented what it called “systemic corruption” at the USDA that resulted in what is characterized as biased technical reviews and approvals of synthetics for use in organics. Their findings illustrate that the materials were being evaluated by food scientists working directly for corporate agribusiness and then approved by a body (the NOSB) illegally stacked with agribusiness representatives.

“There are at least two corporate executives now sitting on the board in seats that were designated for farmers in the Organic Foods Production Act, passed by Congress,” Kastel added. “If the board truly reflected the spirit and letter of the law it would operate under the precautionary principle and ingredients like carrageenan would be banned from organic production.”

In its letter to the political appointees running the USDA, Cornucopia affirmed, “We hope that qualified individuals will apply to be on the board this year and that Secretary Vilsack and Deputy Secretary Kathleen Merrigan will reverse their past policy of refusing to share the names of nominees publicly. We hope that doing so will result in the appointment of truly exemplary candidates that reflect the values of the organic community as intended by Congress.”

Here’s a chart of the major corporate ownership and involvement in the organic food sector: 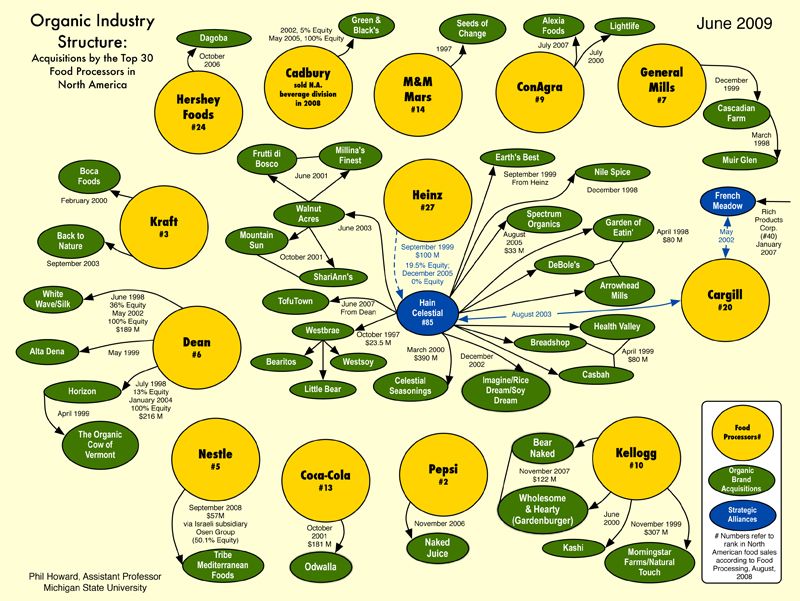 Dr. Phil Howard, an Assistant Professor at Michigan State, is responsible for the creation and updating of the organic food business chart. He teaches in the University’s Community, Agriculture, Recreation and Resource Studies program.

Dr. Howard also created a graphically animated version of consolidation occurring in the organic food sector between 1995 and 2007. You can view this by clicking here.