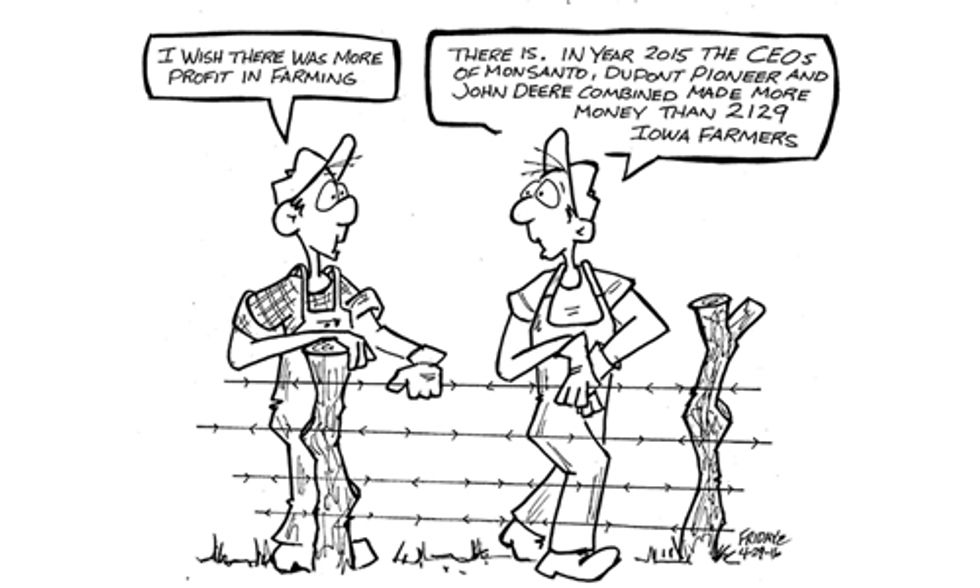 I love cartoons and was appalled when I read this tweet:

I am no longer the Editorial Cartoonist for Farm News due to the attached cartoon which was published yesterday. Apparently a large company affiliated with one of the corporations mentioned in the cartoon was insulted and cancelled their advertisement with the paper, thus, resulting in the reprimand of my editor and cancellation of It's Friday cartoons after 21 years of service and over 1,090 published cartoons to over 24,000 households per week in 33 counties of Iowa.

I did my research and only submitted the facts in my cartoon.

That's okay, hopefully my children and my grandchildren will see that this last cartoon published by Farm News out of Fort Dodge, Iowa, will shine light on how fragile our rights to free speech and free press really are in the country.

The CEOs at the ag giants earned about $52.9 million last year, based on Morningstar data. Monsanto and DuPont, the parent of Johnston-based Pioneer, are large seed and chemical companies and Deere is a large farm equipment manufacturer.

Profits for the three companies, all with large operations across Iowa, also have declined as farm income has been squeezed. After peaking in 2013, U.S. farm income this year is projected to fall to $183 billion, its lowest level since 2002.

Friday received an email from his supervisor at Farm News, informing him that he would be fired, citing he was “instructed" by a superior to not accept another cartoon from Friday. The supervisor told Friday that “in the eyes of some, Big Ag cannot be criticized or poked fun at."

It also published Friday's cartoons based on his firing. Here's one:

Friday has done other cartoons like this. It's not surprising that he has corporate advertisers upset.

Consider a quick note to Farm News about how badly Americans need a free, independent press to discuss farm issues.