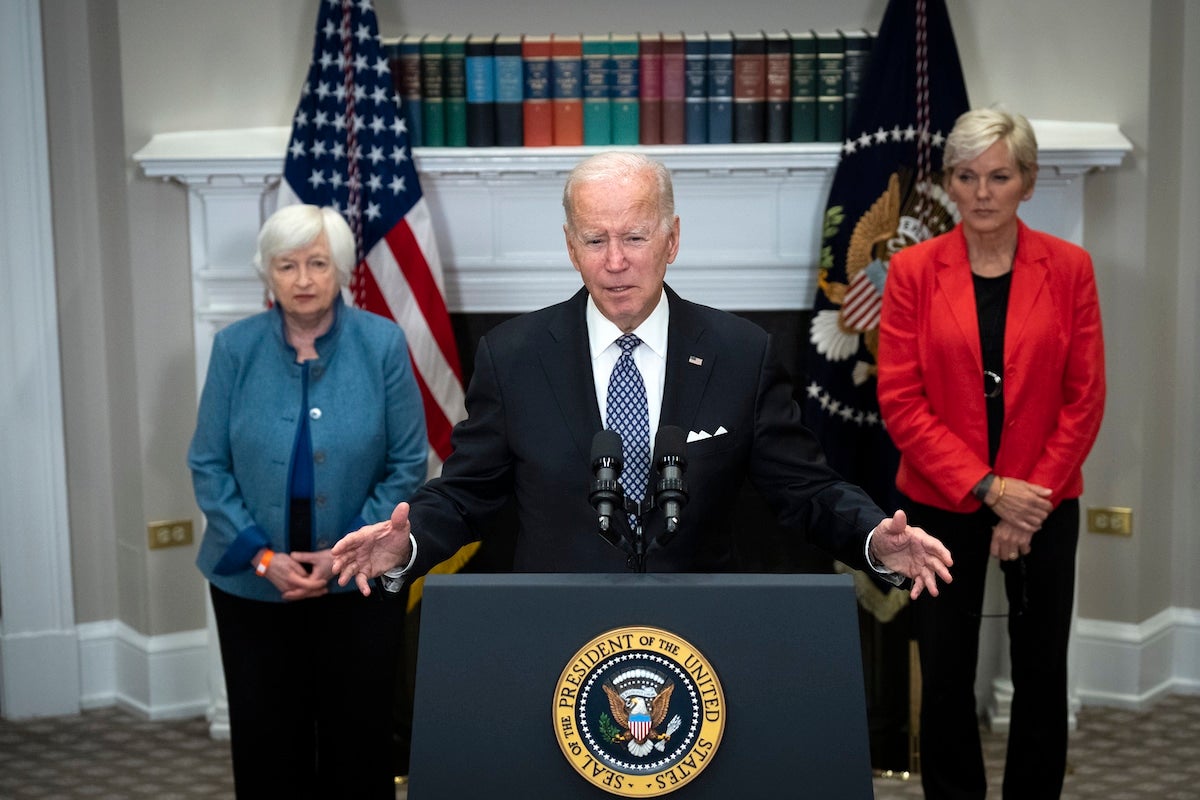 ExxonMobil, for example, announced October 28 that it had earned $19.7 billion in profits during the third quarter of 2022. That’s more than the fossil fuel company has ever made in any quarter before and 10 percent higher than its previous record, which was just set during the second quarter of 2022, as The New York Times reported at the time. However, Biden was not impressed, accusing the companies of taking advantage of the war to fill their coffers and calling on them to instead work to reduce prices.

“You know, if they don’t, they’re going to pay a higher tax on their excess profits and face other restrictions,” Biden told reporters Monday. “My team will work with Congress to look at […] these options that are available to us and others. It’s time for these companies to stop war profiteering, meet their responsibilities to this country, and give the American people a break and still do very well.”

Biden’s statement came a little more than a week before the midterm elections next Tuesday, as the president attempts to direct anger over high gas prices towards energy producers and away from the Democrats who are hoping to hang on to both the House and Senate. Biden’s own approval ratings fell this summer as gas prices reached record highs and climbed again as prices started to fall, The New York Times noted. Polls also show that U.S. residents are more likely to believe the country is headed in the right direction when gas prices are lower. Currently, the average gas price is $3.76 per gallon, down from more than $5 over the summer, Biden told reporters. However, Biden said that if oil companies stuck to the profit levels they had earned over the past 20 years and put the extra money into increasing production, then gas prices would fall a further 50 cents.

“Oil companies’ record profits today are not because they’re doing something new or innovative,” Biden said. “Their profits are a windfall of war — the windfall from the brutal conflict that’s ravaging Ukraine and hurting tens of millions of people around the globe.”

ExxonMobil was the only oil company Biden referenced by name, but all of the major oil and gas companies have done historically well since Russian President Vladimir Putin invaded Ukraine. ExxonMobil, Chevron, Shell, BP, ConocoPhillips and TotalEnergy’s combined earnings during the second and third quarters of 2022 were more than two-and-a-half times higher than their earnings during the same quarters last year and more than $100 billion more than their total 2021 haul, The Guardian reported. The massive profits also come amidst a year of extreme weather events fueled by the climate crisis, from spring and summer heat waves to autumn hurricanes.

“I’m thrilled to see President Biden publicly consider this approach,” Rep. Ro Khanna of California, who has introduced legislation to tax fossil fuel windfalls and return the money to consumers as a rebate, told Politico in a statement. “I’ve had a number of private conversations with White House officials and I hope they will act to help lower prices at the pump and send money back to hardworking Americans.”

California Governor Gavin Newsom has also called for such a tax.

“Crude oil prices are down but oil and gas companies have jacked up prices at the pump in California. This doesn’t add up,” Newsom said on Friday, as The Guardian reported. “We’re not going to stand by while greedy oil companies fleece Californians. Instead, I’m calling for a windfall tax to ensure excess oil profits go back to help millions of Californians who are getting ripped off.”

However, some progressives questioned Biden’s call for the industry to increase production in the midst of the climate crisis.

The oil and gas industry was, predictably, opposed to the idea.

“Rather than taking credit for price declines and shifting blame for price increases, the Biden administration should get serious about addressing the supply-and-demand imbalance that has caused higher gas prices and created long-term energy challenges,” American Petroleum Institute President Mike Sommers said, as The New York Times reported.

However, it is unlikely that Biden’s windfall tax will come to fruition because Congress is not currently in session and Republicans are likely to win a majority in at least one chamber next Tuesday, Politico noted.

The oil and gas industry has used the energy crisis to argue against national climate policies that would restrict drilling and fossil fuel exploration. However, climate advocates have countered that the industry is sitting on unused leases to keep prices high and that only transitioning to renewable energy can ultimately stabilize energy prices long term.

“Renewables will insulate us from global oil shocks much more than domestic drilling ever could,” Mia DiFelice of Food & Water Watch argued in July.