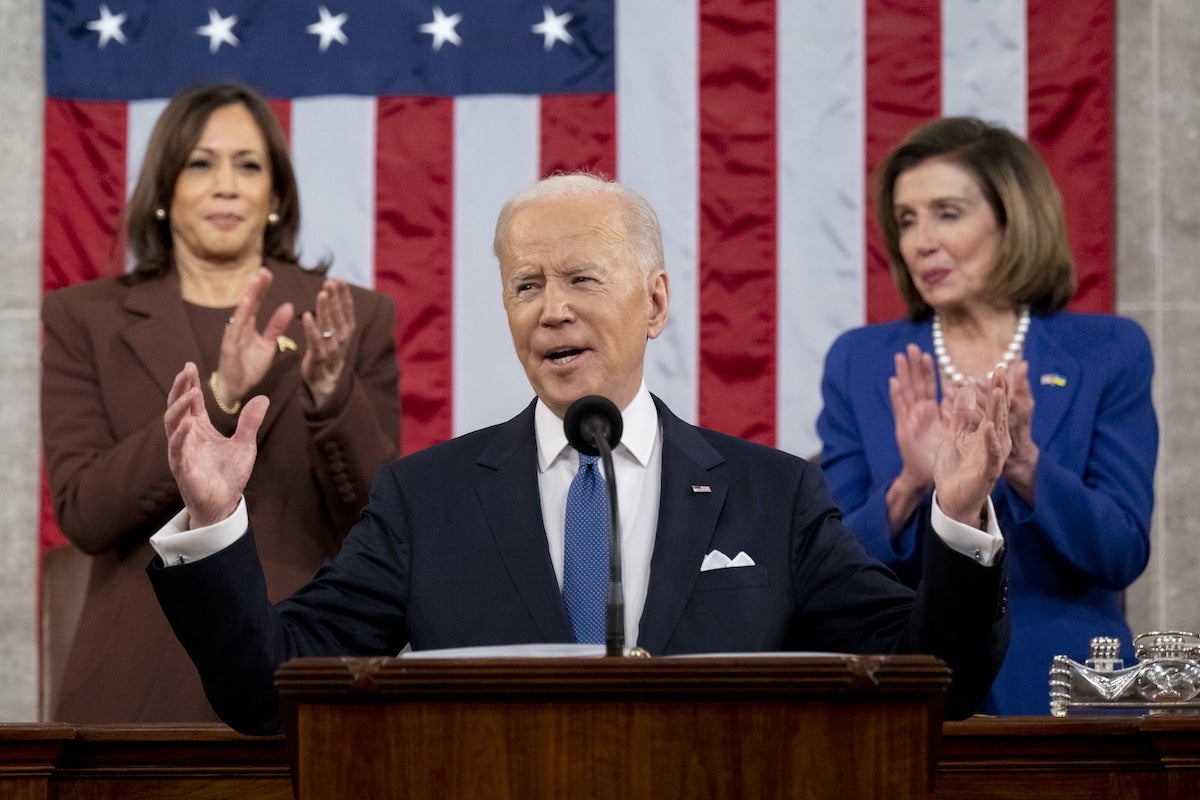 President Joe Biden used a novel argument for climate action in his State of the Union address Tuesday night: it can help combat inflation.

During the speech, Biden outlined a plan to fight inflation by lowering costs instead of wages, and addressing the climate crisis was the second item on that agenda.

“Second — cut energy costs for families an average of $500 a year by combatting climate change,” Biden said, according to a transcript published by POLITICO. “Let’s provide investments and tax credits to weatherize your homes and businesses to be energy efficient and you get a tax credit; double America’s clean energy production in solar, wind, and so much more; lower the price of electric vehicles, saving you another $80 a month because you’ll never have to pay at the gas pump again.”

Both clean energy tax credits and electric vehicle support are major parts of Biden’s Build Back Better Act, The Hill noted. This bill is currently stalled in the Senate because Senator Joe Manchin (D-W.Va.) said last year he would not support it. However, he has expressed interest in the tax credits for clean energy.

Overall, Biden only used the word “climate” twice in the speech, and the phrase “climate crisis” once, as Insider pointed out. In this first mention of the issue, he also emphasized the economic benefits of climate action.

“We’ll create good jobs for millions of Americans, modernizing roads, airports, ports, and waterways all across America,” Biden said, according to POLITICO. “And we’ll do it all to withstand the devastating effects of the climate crisis and promote environmental justice.”

He went on to touted his plan to build a network of half a million electric vehicle charging stations and replace toxic lead pipes.

Biden’s speech came the day after the UN released the latest Intergovernmental Panel on Climate Change report, warning that urgent action is needed to prevent climate change from exceeding both humanity’s and Earth’s ability to adapt. Progressives ahead of the speech hoped that Biden would use the moment to make an urgent appeal to action, E&E News reported.

“We should commit to getting the… climate spending through,” Rep. Ro Khanna (D-Calif.) said, referring to the Build Back Better Act. “He should make that front and center of the agenda.”

On the other side, Republicans have been pressuring Biden to up fossil-fuel production in response to Russia’s invasion of Ukraine, echoing the talking points of the oil-and-gas lobby, HuffPost pointed out. House Republicans held a press conference before the speech in which they said Biden was waging “war on American energy independence.”

Environmentalists, on the other hand, want Biden to speed the transition towards renewable energy. The Build Back Fossil Free coalition, for example, said that Biden should declare a climate emergency and block all new fossil fuel projects.