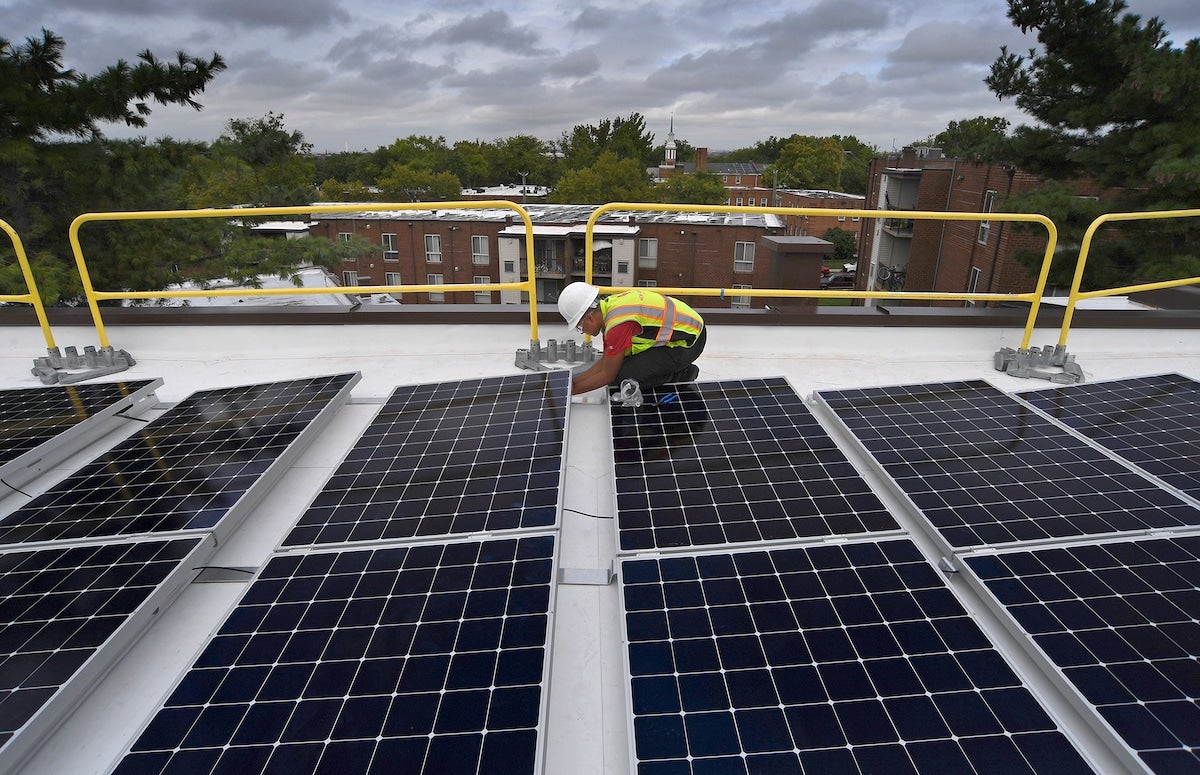 A solar industry worker installs panels on the roof of an apartment complex in Washington, DC in 2019. Michael S. Williamson / The Washington Post via Getty Images

President Joe Biden has taken steps to boost the solar industry in the U.S.

The administration announced plans to pause tariffs on solar panels and use the Defense Production Act to boost the domestic manufacturing of clean energy technology including solar parts.

“Together, these actions will spur domestic manufacturing, construction projects, and good-paying jobs – all while cutting energy costs for families, strengthening our grid, and tackling climate change and environmental injustice,” the White House said in an announcement. “With a stronger clean energy arsenal, the United States can be an even stronger partner to our allies, especially in the face of Putin’s war in Ukraine.”

The suspended tariffs impact solar panels from four Asian countries: Cambodia, Malaysia, Thailand and Vietnam, Reuters reported. There is an ongoing investigation into whether importing solar panels from these countries is a way to evade tariffs on Chinese goods. However, the investigation has put a damper on some U.S. solar projects as companies are concerned about having to pay tariffs of up to 250 percent depending on its outcome.

“There is going to be this safe harbor timeout on the… collection of duties, and that’s at the heart of what’s going to save all of these solar projects and ensure that they are going forward,” a source familiar with the situation told Reuters.

However, domestic solar manufacturers and labor unions have argued in favor of tariffs on international imports in order to boost the domestic industry, The New York Times reported.

“If you have a supply chain that depends on dumped and subsidized imports, then you’ve got a problem with your supply chain,” Scott Paul, the president of the Alliance for American Manufacturing, told The New York Times.

To assuage these concerns, the administration has also invoked the Domestic Production Act to boost the domestic industry as well.

The news of the tariff suspension caused solar energy stocks to rise on Monday, CNBC reported.

“We believe the announcement will be a clear positive for our coverage, particularly within the utility-scale solar market, which has faced uncertainty since the U.S. Department of Commerce’s AD/CVD investigation was launched in late-March,” JPMorgan analyst Mark Strouse said in a note to clients reported by CNBC.

“Investing in American-made clean energy will boost U.S. manufacturing, lower costs for families, create millions of good paying jobs, and position the United States as a global leader on the cutting edge of clean energy innovation,” Executive Director of Climate Power Lori Lodes said in a statement emailed to EcoWatch.

The Center for American Progress noted that this was the first time the Defense Production Act had been used specifically to boost clean energy technology.

“Today’s announcement is a historic first,” senior vice president for Energy and Environment Policy at the Center for American Progress Christy Goldfuss said in a statement emailed to EcoWatch. “It puts the climate crisis on par with other threats to our nation’s well-being and recognizes that we have the tools to tackle it. Invoking the Defense Production Act to bolster U.S. energy security by strengthening our domestic manufacturing base for clean energy here at home is exactly what our country needs now.”

The Biden administration has committed to reducing U.S. greenhouse gas emissions by half by 2030.