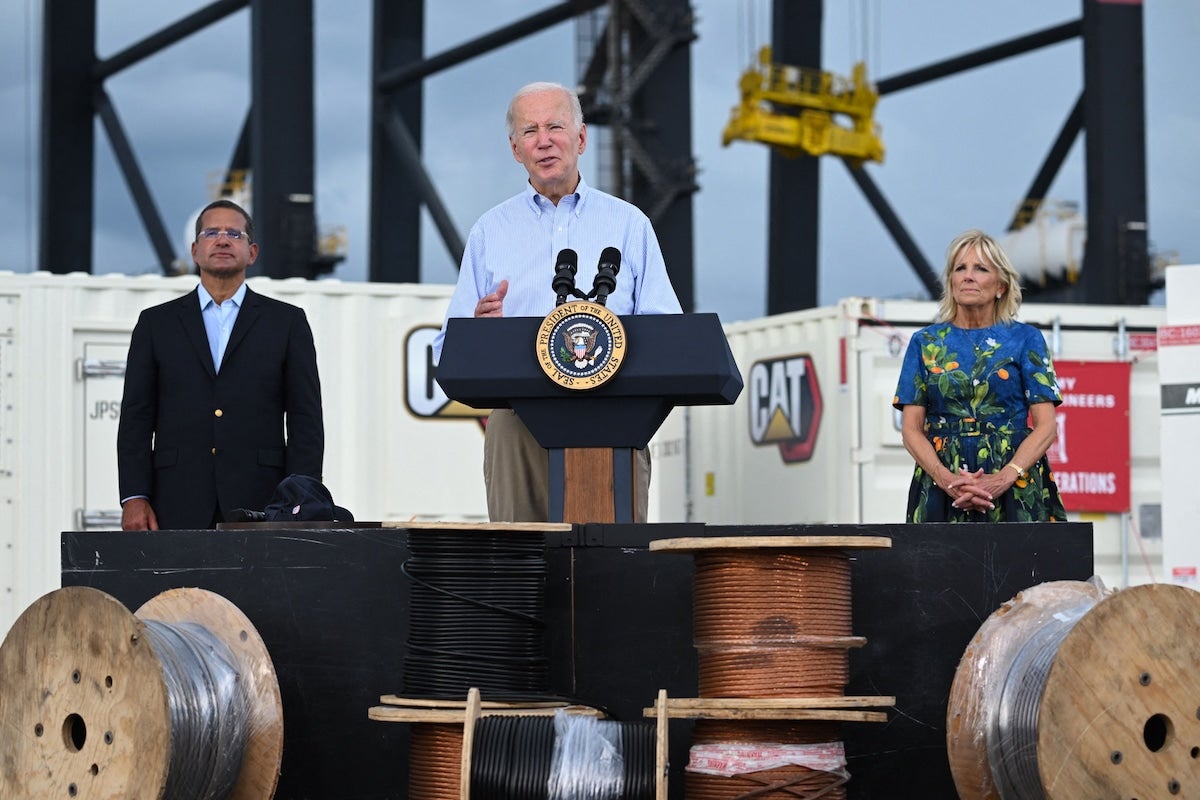 In a visit to Puerto Rico Monday, President Joe Biden pledged an initial $60 million to help the U.S. territory prepare for hurricanes and other storms that have been made more extreme by the climate crisis.

His visit comes five years after Hurricane Maria devastated the island’s infrastructure and killed nearly 3,000 people and around two weeks after Hurricane Fiona made landfall and left more than three million people without power, as The Washington Post reported.

“We came here in person to show that we are with you,” Biden said in Ponce, Puerto Rico. “All of America is with you as you receive and recover and rebuild.”

The $60 million promised by Biden is part of the $1.2 trillion approved by Congress for infrastructure in 2021. It will be used to strengthen the island’s storm walls and warning system, among other things, The Guardian reported.

“We know that the climate crisis and more extreme weather are going to continue to hit this island, and hit the United States overall, and as we rebuild we have to ensure that we rebuild it to last, but particularly focused on the power grid,” Biden said in Ponce, as The Guardian reported.

Hurricane Maria was made between five and 10 percent wetter because of the climate crisis, according to a 2018 study. In addition to its devastating death toll, it also wreaked havoc on the power grid on the island, and full power wasn’t restored until approximately 11 months after the storm, according to ABC News. When Hurricane Fiona approached, the entire island lost power again. By the day before Biden’s visit, it had been restored to 90 percent of customers, as Reuters reported.

“This is an important milestone, coming just 13 days after Fiona made landfall,” Granholm said. “While we’re grateful for this progress, we realize the work is not over. Efforts to rebuild and help those impacted will continue.”

Biden’s visit to Puerto Rico, on which he was joined by First Lady Jill Biden, came in the shadow of former President Donald Trump’s much-criticized visit following Hurricane Maria in 2017, during which he tossed paper towel rolls into a crowd, as The Washington Post reported. Trump also put a pause button on billions of dollars intended for hurricane recovery, which the Biden administration has since let through, according to Reuters.

“I’m heading to Puerto Rico because they haven’t been taken very good care of,” Biden told journalists before leaving the White House, as The Washington Post reported. “They’ve been trying like hell to catch up from the last hurricane.”

However, some in Puerto Rico questioned whether the president would be able to follow through on his commitment to do better by the island, seeing as the money he freed up doesn’t seem to have done much so far. Some residents questioned the effectiveness of the Federal Emergency Management Agency (FEMA). Further, environmental justice lawyer Ruth Santiago, of Salinas, Puerto Rico, challenged the wisdom of shoring up a fossil fuel-based grid system instead of investing in alternatives like rooftop solar.

“Puerto Rico doesn’t have to be a place of disaster and devastation,” she said in an interview reported by The Washington Post. “It could be viable if federal funds are used in a way that decentralizes, decarbonizes and democratizes the power grid. FEMA has a key role but so far they have not been working in that direction.”