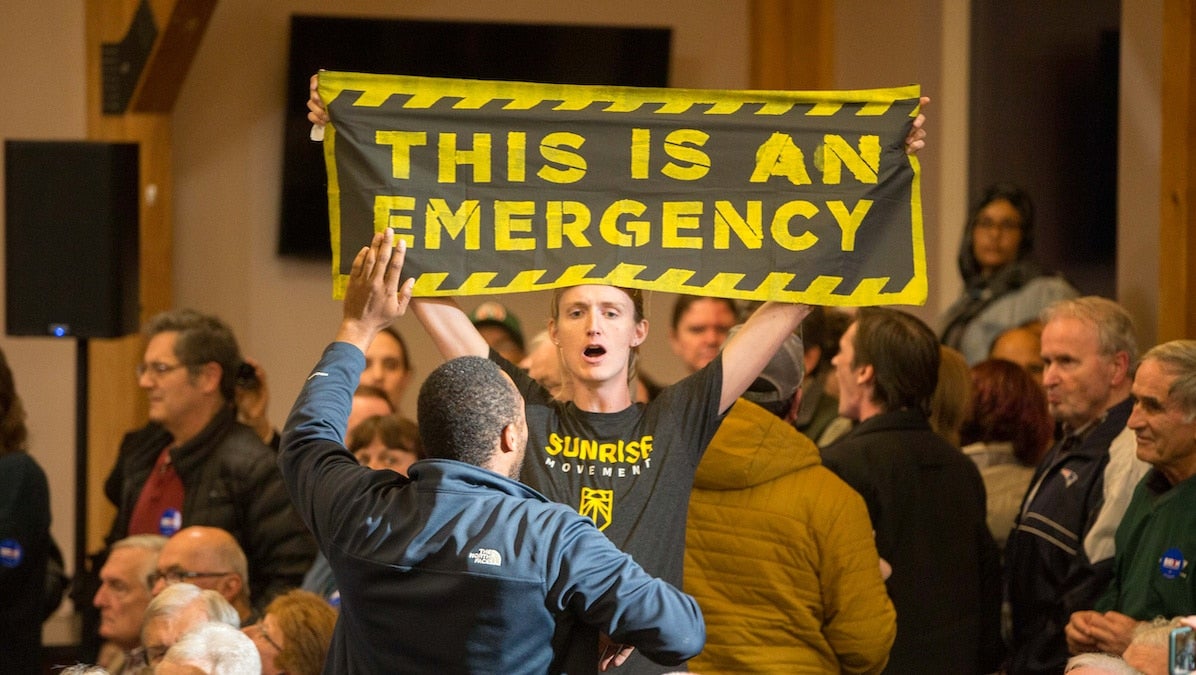 A diverse coalition of nearly 150 progressive advocacy groups is demanding that Democratic presidential nominee Joe Biden ban fossil fuel executives and lobbyists from his 2020 campaign and commit to barring them from his administration if elected in November, warning that a cabinet stocked with Big Oil representatives would render empty the former vice president’s vows to confront the climate crisis with ambition and urgency.

In a letter Tuesday morning, 145 organizations representing a wide array of progressive interests called on Biden to “ban all fossil fuel executives, lobbyists, and representatives from any advisory or official position on your campaign, transition team, cabinet, and administration,” arguing there are countless qualified experts and advocates who have not attempted to benefit financially from polluting and extractive industries.

“People who left government to serve on a fossil fuel industry board, enrich themselves as oil and gas advisors, receive funding from fossil fuel companies to espouse ‘reasonable’ climate positions, or work with industry front groups should have no role in a Biden administration or campaign,” the groups wrote. “Neither should fossil fuel backers on Wall Street, who have attempted to profit off pollution.”

The letter’s signatories — which include Oil Change U.S., Greenpeace, Justice Democrats, Sunrise Movement, People’s Action, and Public Citizen — raised alarm at a Bloomberg report earlier this month indicating that industry-tied individuals like Jason Bordoff, a member of the National Petroleum Council, are advising the Biden campaign in an informal capacity.

The letter points to polling from progressive policy shops Data for Progress and Fossil Free Media showing that 61% of Democratic voters oppose “fossil fuel industry lobbyists or representatives working in the White House and other government agencies.” Voters overall oppose fossil fuel industry representatives serving in the federal government by a 22-point margin, the survey found.

The groups’ call comes hours after Biden, speaking in the battleground state of Pennsylvania on Monday, told supporters that contrary to President Donald Trump’s claims, he has no plan to ban fracking even as he pushes for large investments in clean energy and promises to treat the climate crisis like the “existential threat” that it is.

Tamara Toles O’Laughlin of 350 Action said Biden’s approach to the climate emergency will be judged not by soaring rhetoric and promises but by his actions during the presidential campaign and, if elected, while in office.

“Thanks to the environment and climate movement’s decades of tireless work to make decision-makers act boldly, the Biden-Harris campaign has adopted the strongest climate platform of any presidential ticket in history,” said O’Laughlin. “However, real progress will be measured by relationship to communities most impacted and investments in the same.”

“Fossil fuel representatives have no place at the table except to hand over their dirty profits to rebuild what they have broken,” O’Laughlin continued. “Any accommodation to fossil fuel executives will undermine the promise of our shared work and throw away our chances of a livable future in the climate decade.”

Dear Vice President Biden,
Congratulations on your nomination as the presidential candidate for the Democratic Party. As you have said, this is a historic time for our nation. Over 180,000 Americans have lost their lives to theCOVID-19 pandemic that continues to ravage the nation. Millions are rising up to demand racial justice and an end to white supremacy. Donald Trump has put our democracy on the line with his attacks on our right to vote and threats to contest the election. Meanwhile, the climate emergency is ravaging our country, as supercharged wildfires burn across western states, climate-intensified floods and derechos slam the Midwest, and sea level rise threatens our coasts.

We want to thank you for your bold plans to combat the climate crisis and create millions of good-paying, union jobs in a clean energy economy. We applaud the ways in which you have put environmental justice at the heart of your plans, making sure that the communities of color who are on the frontlines of this crisis are at the forefront of its solutions. Implementing your plans would be a major step toward putting this country back on track to meet our global commitments under the Paris Agreement while centering the communities most harmed by environmental injustice.

Your leadership on climate and environmental justice is why we urge you to ban all fossil fuel executives, lobbyists, and representatives from any advisory or official position on your campaign, transition team, cabinet, and administration.

For decades, oil, gas, and coal executives have lied to the American people about the threat of climate change and lobbied against government action, all while attempting to present themselves as part of the solution. During this election, the American Petroleum Institute is spending upwards of ,000 per day to mislead voters into thinking that fossil gas is “clean” energy, even though methane emissions associated with gas can make it worse than coal. Meanwhile, fossil fuel corporations have continued to expand their operations, destroy our environment, and pollute communities—especially communities of color—across this nation and around the world.

These abuses have real costs in the communities that you have pledged to serve. Nearly half of Americans now breathe polluted air, the vast majority of which comes from burning fossil fuels, according to research by the American Lung Association. According to a 2016 NAACP report, 71% of African Americans live in counties in violation of air pollution standards. Indigenous people have seen their rights trampled to build dangerous new pipelines like Dakota Access and Keystone XL. Latina women in Texas who live near gas flaring are seeing a 50% increase in premature births.

This critical need to advance climate and environmental justice is why we are concerned by initial reports that people with ties to fossil fuel interests have been advising your campaign and may be angling for roles in your administration. People who left government to serve on a fossil fuel industry board, enrich themselves as oil and gas advisors, receive funding from fossil fuel companies to espouse “reasonable” climate positions, or work with industry front groups should have no role in a Biden administration or campaign. Neither should fossil fuel backers on Wall Street, who have attempted to profit off pollution.
We appreciate your team’s recent reiteration of your commitment to eliminate fossil fuel subsidies as part of your comprehensive approach to climate action and environmental justice. A commitment from you to ban all fossil fuel executives, lobbyists, and representatives from your administration would go far to assuage any lingering concerns about your climate commitments that may have been raised when the DNC dropped support for ending fossil fuel subsidies from the 2020 Platform.

Many thousands of talented experts, advocates, and community leaders who do not represent coal, oil, and gas companies would gladly serve in your administration and help move our country forward into the clean energy future. They’ve shown the expertise, principles, and dedication that should be a requirement for any administration role. We urge you to choose them over the fossil fuel CEOs, lobbyists, and representatives who are profiting from climate destruction.

We thank you for making combating the climate crisis a top priority for your campaign. We look forward to working alongside you to build back better, create a new, clean energy economy that creates millions of good-paying, union jobs, and address the crises of climate change, Covid-19, mass unemployment, and the environmental injustice and racism that have plagued our nation for too long. Millions of us are ready to get to work: There’s no need to slow us down with people tied to fossil fuel interests.