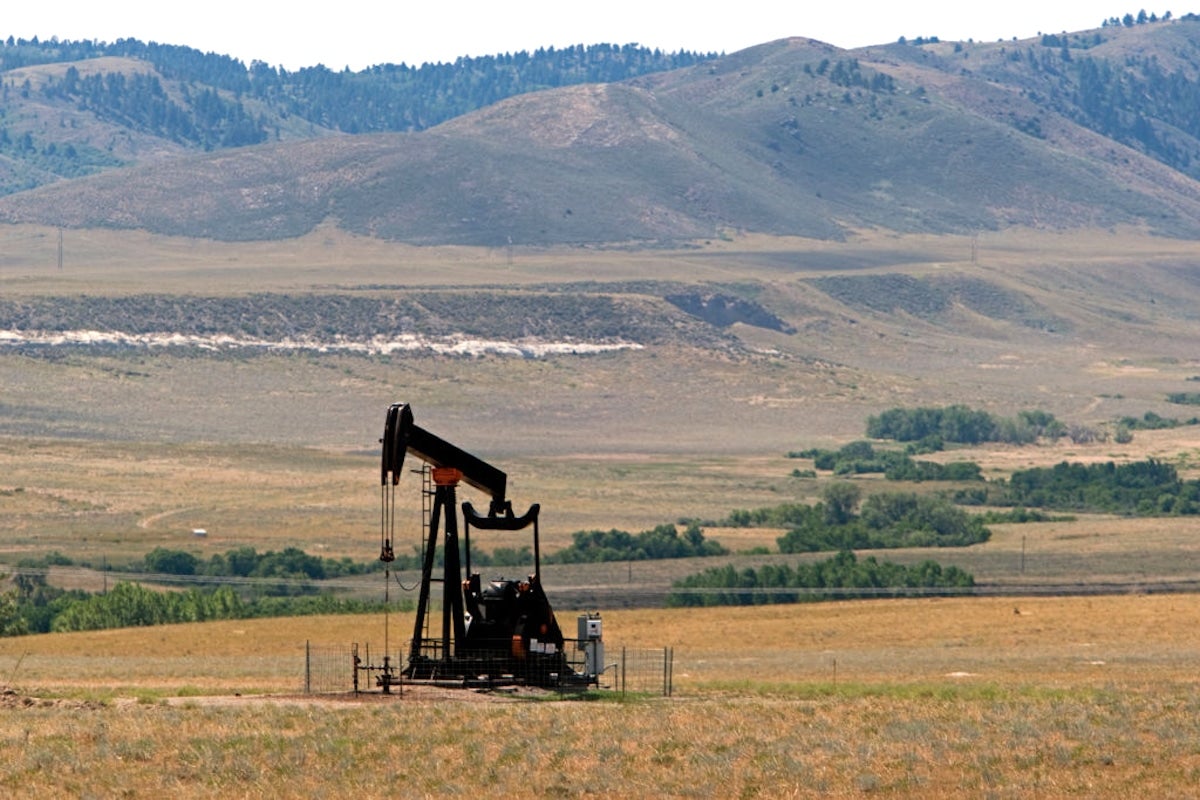 An oil well in Wyoming. A lease sale in the state is now on hold because of the Biden administration’s pause on new fossil fuel decisions. Andrew Woodley / Universal Images Group via Getty Images

The Biden administration said Saturday it would halt all federal decisions on new oil and gas projects due to an ongoing legal battle over how to assess their climate impacts.

The administration’s pause comes alongside an appeal of a decision from a Trump-appointed judge, who ruled earlier this month that the administration could not use a higher estimate for the cost of allowing additional carbon dioxide emissions.

“[W]ork surrounding public-facing rules, grants, leases, permits, and other projects has been delayed or stopped altogether so that agencies can assess whether and how they can proceed,” the Department of Justice wrote in its legal filing.

The legal dispute revolves around the “social cost of carbon,” The New York Times explained. This is the metric used to determine how much a given fossil-fuel project may cost the economy by contributing to the climate crisis so that it can be weighed against the initial economic benefits. The Obama administration set the social cost of carbon at $51 per ton of carbon dioxide emitted by burning fossil fuels, while the Trump administration lowered it to $7. The Biden administration then raised it back to $51 and has convened a working group to update it further.

However, that was not the end of the story. Ten Republican attorneys general sued the Biden administration for upping the estimate again, saying that it disproportionately harmed energy producing states, HuffPost reported. Then, on Friday, February 11, U.S. District Judge James Cain of the Western District of Louisiana ruled in favor of the Republican states and blocked the Biden administration from using the higher social cost of carbon estimate, as AP News reported at the time. Cain wrote that the higher estimate would “artificially increase the cost estimates of lease sales.”

Environmental groups praised the Biden administration for halting new leases and permits while the court battle plays out, but expressed concern about how it would ultimately resolve.

“It’s a mixed bag,” Center for Biological Diversity director of government affairs Brett Hartl told The New York Times. “They will have to issue the leases at some point, and they won’t be able to use the social cost of carbon.”

However, the Department of Justice felt that its appeal would ultimately triumph.

“From President Nixon on, every President has imposed some internal Executive Branch requirement for federal agencies to assess the costs and benefits of major government actions,” the legal filing reads. “Section 5 of Executive Order 13990, which directs the development of rigorous, standardized estimates of the social costs of greenhouse gas emissions for use in regulatory analysis, falls comfortably within this well established tradition of presidential supervision of Executive Branch policymaking. But in replacing presidential supervision with judicial decree, this nationwide preliminary injunction upends that tradition, unsettles more than five decades of regulatory practice, intrudes upon the President’s Article II authority, and casts doubt on the legality of numerous Executive Orders issued to guide agencies in their preparation of regulatory analyses.”

In the meantime, immediate fallout from Cain’s decision and the administration’s appeal puts the agenda of both the pro-fossil-fuel and the pro-climate-action camps on hold, The New York Times reported. A lease sale for drilling in Wyoming is now delayed, as is the work of the interagency group that was updating the social cost of carbon.

“The consequences of the injunction are dramatic,” the Biden administration wrote in the filing. “Pending rulemakings in separate agencies throughout the government — none of which were actually challenged here — will now be delayed. Other agency actions may now be abandoned due to an inability to redo related environmental analyses in time to meet mandatory deadlines.”