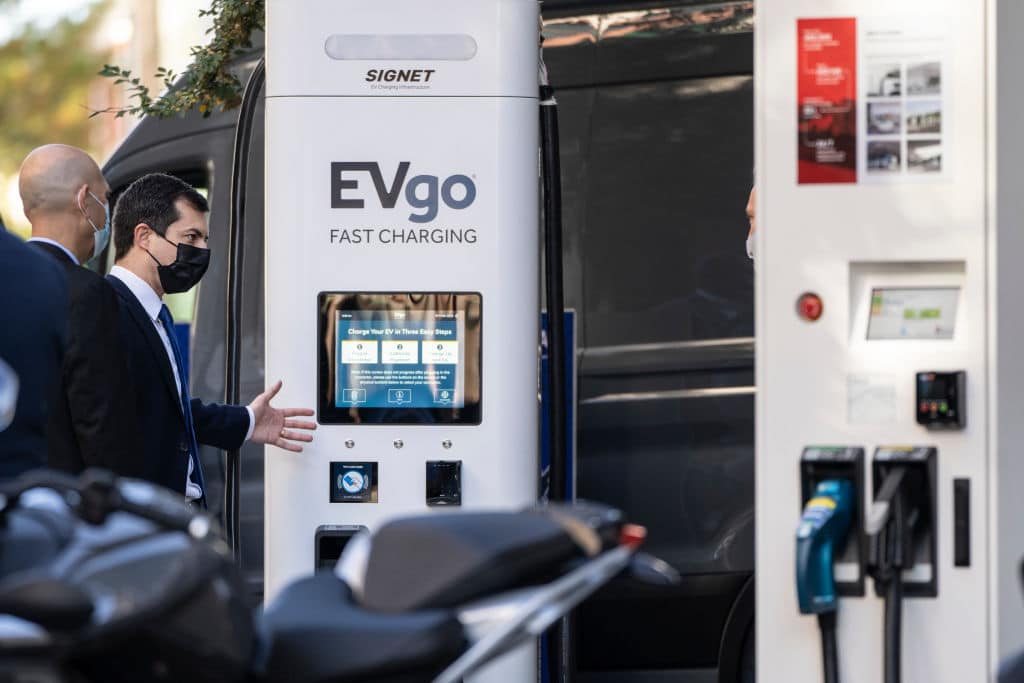 U.S. Secretary of Transportation Pete Buttigieg looks at an EVgo charging station during an electric vehicles event outside of the Department of Transportation Oct. 20, 2021 in Washington, DC. Drew Angerer / Getty Images

If the U.S. is going to meet the Biden administration’s goal of ensuring half of all new cars sold by 2030 are hybrid or electric vehicles, then the new drivers are going to need to know what to expect when they set out on the nation’s highways.

To that end, the Department of Transportation last Thursday proposed minimum standards and requirements for the electric vehicle charging stations receiving some of the $5 billion in federal funding earmarked for their construction.

“To support the transition to electric vehicles, we must build a national charging network that makes finding a charge as easy as filling up at a gas station,” U.S. Transportation Secretary Pete Buttigieg said in the announcement. “These new ground rules will help create a network of EV chargers across the country that are convenient, affordable, reliable and accessible for all Americans.”

The new standards would apply to charging stations funded via the National Electric Vehicle Infrastructure (NEVI) Formula Program established by President Joe Biden’s Bipartisan Infrastructure Law. They would require that every station use a type of charger known as a DC Fast Charger, Reuters reported. Each charger would need to have at least four ports that could charge at or exceeding 150 kilowatts.

The goal of the rules is to make charging an electric vehicle predictable but also accessible to rural or underserved communities. The charging stations would not be able to charge membership fees. They also would need to be built every 50 miles along interstate highways, be no more than a mile from a major highway, and be fast working, The New York Times reported.

“EV drivers should be able to count on finding a place to recharge easily wherever they go,” Buttigieg told reporters last Wednesday, as The New York Times reported.

Promoting electric vehicles is an important part of the Biden administration’s plans to slash greenhouse gas emissions in order to combat the climate crisis. As of 2020, transportation was the highest-emitting sector in the U.S., according to the Environmental Protection Agency. Biden wants 50 percent of new cars to be electric by 2030 and to build a network of 500,000 charging stations by that date, CNBC reported.

However, while electric vehicles are selling well in the U.S., some consumers are still concerned about the high initial price and the availability of charging stations, The New York Times pointed out. The new standards are aimed at assuaging the second concern.

“If we’re going to build out infrastructure like we haven’t done since the Eisenhower era, we have to do it right,” Energy Secretary Jennifer Granholm said, as The New York Times reported.

The standards also include measures to make sure that the workers who install the new stations are qualified, well-paid and have access to on-the-job training, the government announcement said. They would also ensure all the stations use the same software and provide availability and price data for each station to help with trip planning.

“President Biden’s Bipartisan Infrastructure Law provides states with both the funding and framework to build out a reliable charging network that gives more people the confidence they need to buy and use electric vehicles to travel from coast to coast and in every state in between,” Deputy Federal Highway Administrator Stephanie Pollack said in the government announcement. “This is a foundational step that will provide EV drivers with predictable access to reliable electric vehicle charging access across the United States.”