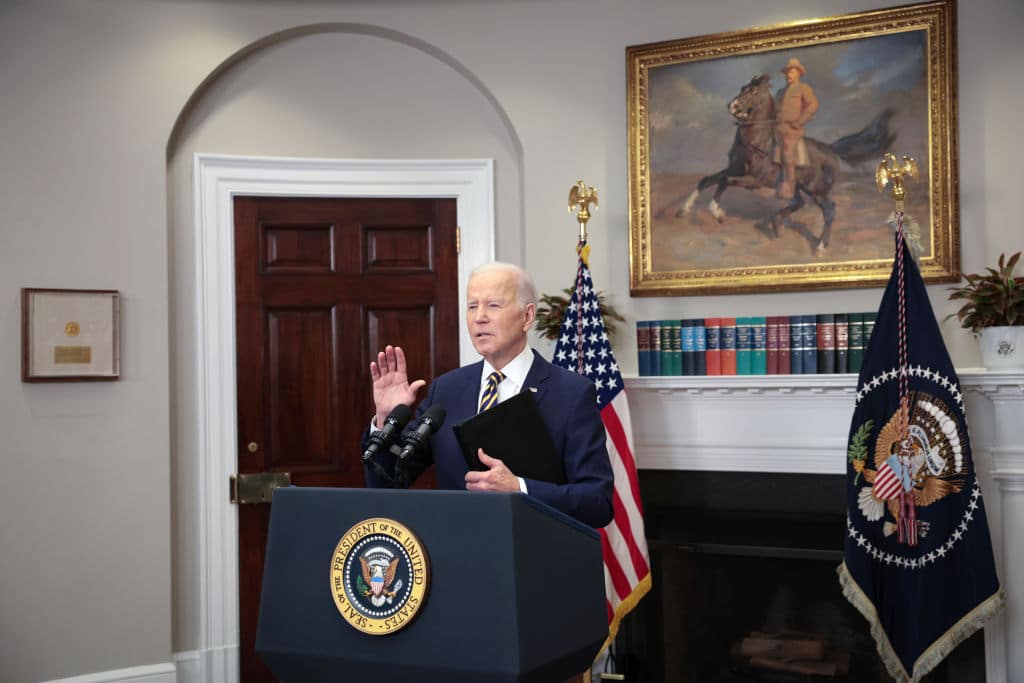 The U.S. will ban the import of all Russian fossil-fuel products in response to the country’s invasion of Ukraine, President Joe Biden announced on Tuesday.

“Today I am announcing the United States is targeting the main artery of Russia’s economy. We’re banning all imports of Russian oil and gas and energy,” Biden said from the White House, as CNN reported. “That means Russian oil will no longer be acceptable at US ports and the American people will deal another powerful blow to Putin’s war machine.”

The move comes a day after oil prices reached their highest point since 2008 in response to a suggestion from the U.S. Secretary of State Antony Blinken that the U.S. and its allies might sanction Russian oil. Ultimately, the U.S. acted on its own because Europe is far more dependent on Russian energy, according to CNN. However, Bloomberg, which first broke the news, said that the decision was made after consulting with European allies.

The UK also announced Tuesday that it would phase out Russian oil imports by the end of the year, BBC News reported. The EU, meanwhile, said it would reduce its dependence on Russian gas by two-thirds and stop using Russian fossil-fuels “well before 2030.”

“The decision today is not without cost here at home,” Biden said. “Putin’s war is already hurting American families at the gas pump. Since Putin began his military build-up at Ukrainian borders, just since then, the price of gas at the pump in America went up 75 cents and with this action it’s going to go up further. I’m going to do everything I can to minimize Putin’s price hike here at home.”

The U.S. plans to release more than 90 million barrels from the Strategic Petroleum Reserve this year, the White House said in a fact sheet. The White House statement also noted that U.S. oil and gas production was nearly at a record high and argued that federal policies were not currently limiting production.

However, the Ukraine crisis comes at a crucial moment for the global fight against the climate crisis. Last week, the latest Intergovernmental Panel on Climate Change report warned that urgent action was required to reduce greenhouse gas emissions before the climate changed so much that the earth could no longer adapt. What the move away from Russian fossil fuels in particular will mean for the climate depends on whether countries ramp up their own oil and gas production or speed the transition to renewable energy instead. In the short term, Oxford University energy policy professor Dieter Helm told the Financial Times he thought the U.S. and Europe would opt for the former, as Inside Climate News reported.

“The energy transition was already in trouble—80 percent of the world’s energy is still from fossil fuels,” Helm said.

However, the White House did emphasize the importance of renewable energy in its announcement.

“In the long run, the way to avoid high gas prices is to speed up – not slow down – our transition to a clean energy future,” the White House said. “We cannot drill our way out of dependence on a global commodity controlled in part by foreign nations and their leaders, including Putin. The only way to eliminate Putin’s and every other producing country’s ability to use oil as an economic weapon, is to reduce our dependency on oil.”