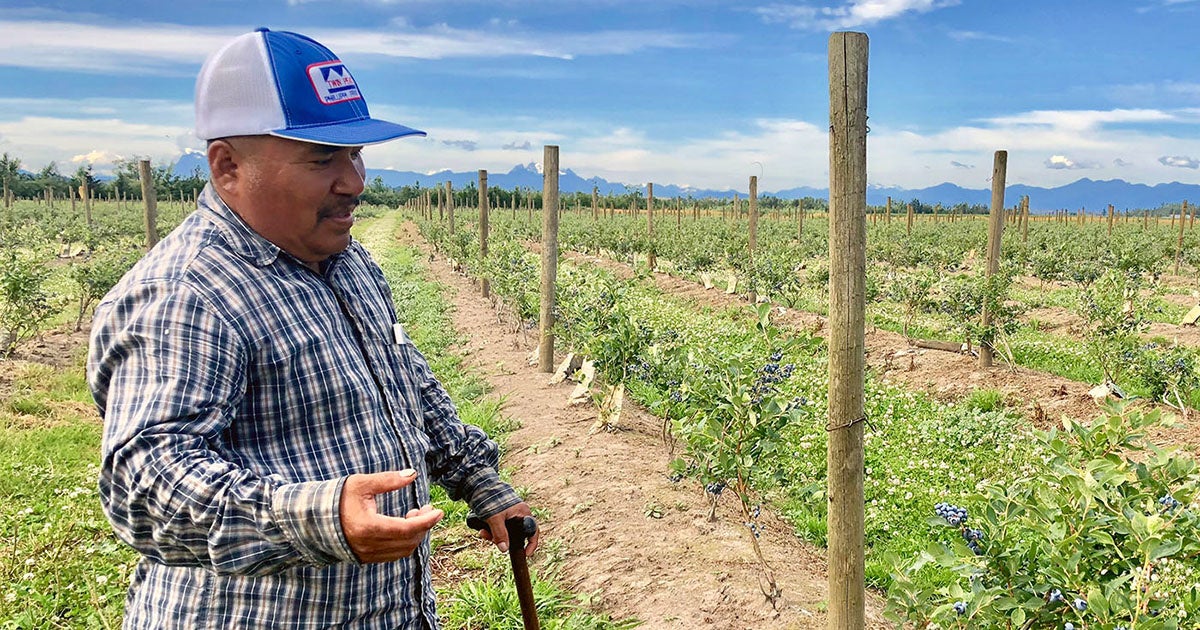 For the first time, Ramon Torres maintains control over his livelihood. He chooses what to farm and how to farm it, free from pesticides that harm workers, under working conditions he helps set.

The 22 acres of juicy strawberries and blueberries he farms belong to him and three others under Cooperativa Tierra y Libertad (“Land and Liberty Cooperative”), a farm co-op founded in 2013 to meet consumer demand for berries farmed under nonexploitative conditions and worker demand for a fair paycheck and safe working conditions. The co-op prides itself on organic farming and livable wages for its workers.

When Torres worked at Sakuma Brothers berry farms in Skagit County, Washington, several years ago, he and his fellow farmworkers endured low wages, unpaid breaks, and exposure to pesticides.

A co-worker, Federico Lopez, was fired immediately after requesting a raise, and, along the way, the workers learned they weren’t paid for rest breaks.

A strike organized by Familias Unidas por la Justicia—and a federal class-action lawsuitresolved in 2015—afforded them more benefits, including the paid rest breaks, and propelled Sakuma Brothers workers to secure a union contract in 2016 that improved their working conditions and led to farmworkers getting paid a minimum of $12 per hour.

In April, a Washington state Supreme Court decision determined that piece workers—workers paid by how much produce they harvest—must be paid at an equal rate for any work that doesn’t involve direct piece work, such as downtime and travel between fields.

“All the bad things about housing, treatment of workers—everything changed,” Torres said through an interpreter.

But in the lead-up to the court-ordered changes, Torres and several other workers were starting to think about other solutions. They asked themselves: What if we set the standard for our own working conditions and own the land we work?

Torres and three others—with the support of food sovereignty and worker solidarity nonprofit Community to Community—formed a cooperative in which members own and live on the land they farm and will, if all goes according to plan, making enough income selling their crops at markets. They worked amid the long hours and demands from family, work, and life.

This summer is the first harvest season for Cooperativa Tierra y Libertad. The co-op now owns and farms berry fields in the rural towns of Sedro-Woolley and Lynden. They’re now producing 150 to 200 boxes each week to sell in markets throughout the region and have laid the groundwork to establish a community-supported agriculture subscription service next year.

And it’s all organic, which is a primary tenet of the co-op’s mission.

Torres and the three other workers—Pedro Torres, Modesto Hernandez Leal, and Tomas Ramon—began organizing the co-op as part of Ramon Torres’s efforts with Familias Unidas por la Justicia, where he was organizing workers to make demands of Sakuma Brothers.

They did so with the support of C2C, which trained the workers using a culturally relevant curriculum in how to form a cooperative. While the four worker-owners farm the land and make all decisions, C2C pitches in with administrative work, marketing, and other tasks the owners need support with as the cooperative gets going.

The co-op members all worked at corporate farms before and are doing their own farming for the first time, said Rosalinda Guillén, executive director at C2C. She is also a farmworker organizer who grew up on a Skagit County berry farm. They’re training as they’re doing the work, she said.

Torres was forced to change course after the Sakuma Brothers strike; while he helped get his coworker reinstated, he was fired.

So, using the lessons he learned from his union activism, he sought to gain greater control of his livelihood.

He and the Cooperativa Tierra y Libertad members agreed on their founding principles.

“When we came together, we decided what we wanted: working with organics, no pesticides, good wages, and the most important thing was not to have a boss ordering [me] around or telling me what to do,” Torres said. 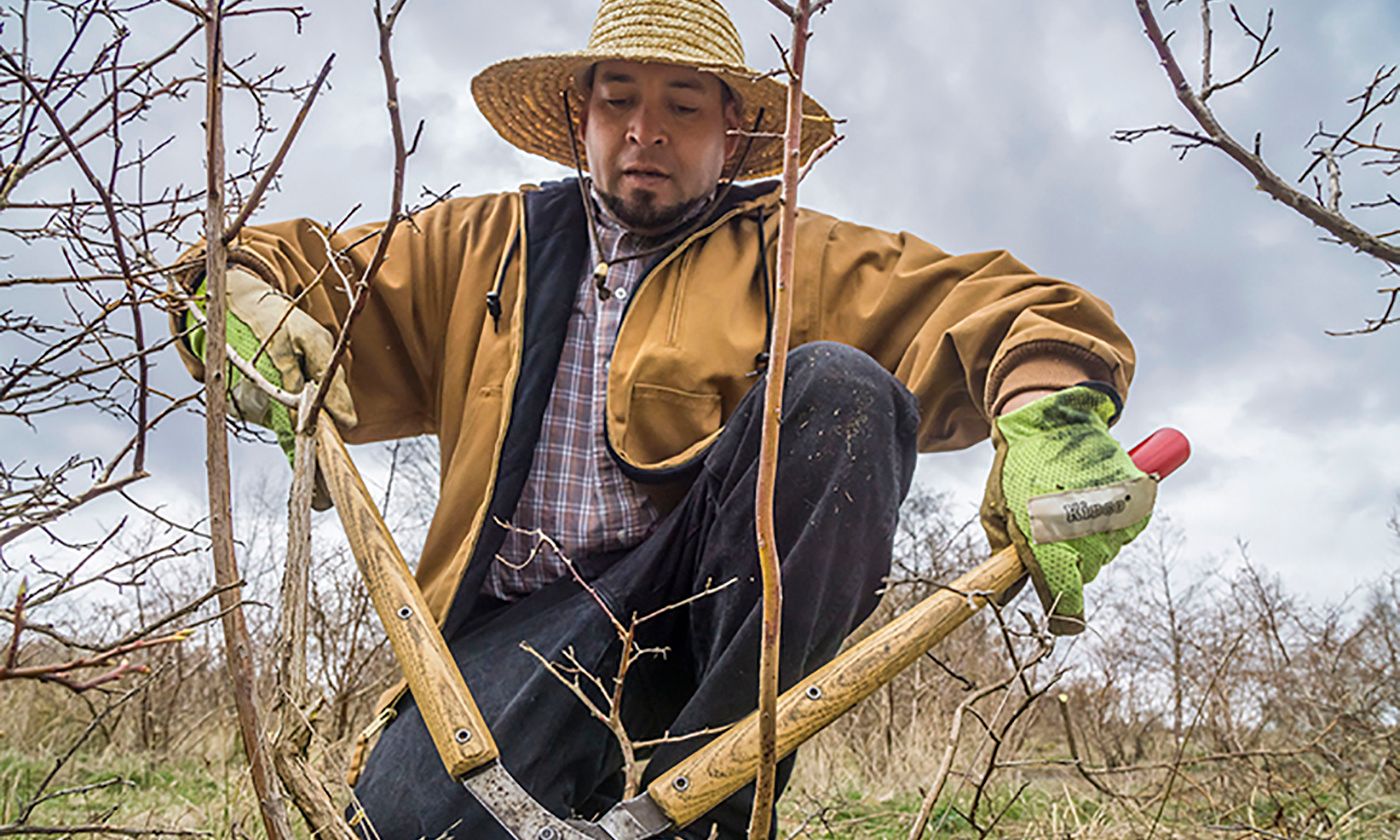 Ramon Torres, worker-owner at Cooperativa Tierra y Libertad, began the co-op with three other members to set the standards for their work conditions, and to own and live on the land they farm.David Bacon

State agencies exercise control over working conditions and pesticide use—and C2C participates in rulemaking processes—but within the parameters of these overarching laws, the co-op sets additional rules about how it raises its crops and treats its workers.

The workers of the co-op have had to overcome barriers.

“The time and intellectual power to change from capitalism to cooperativism requires a lot of energy and time,” Guillén said.

All four co-op founders are currently working other jobs—in corporate agriculture—to support themselves as they get Cooperativa Tierra y Libertad off the ground.

Guillén said their aim isn’t riches, but a preservation of their heritage as they secure their rights.

“They don’t want their kids to leave agriculture. They want their children to grow food the right way,” she said. “It’s more about leaving a legacy and changing the system than making tons of money.”

Among the most effective efforts of the Trump administration is the dismantling of environmental regulations. Last year, former EPA Administrator Scott Pruitt reversed a ban on chlorpyrifos, an insecticide known to harm children’s brains and the nervous system. Just more than a month later, 50 farmworkers in Bakersfield, California, were poisoned by chlorpyrifos. Only a month later, 17 workers planting celery starts in the Salinas area fell ill after nine different pesticides were applied to area fields.

A federal court ordered the EPA ban chlorpyrifos in August, two years after EPA scientists found that the chemical affected the air quality in the largely agricultural California towns of Salinas, Ripon and Shafter.

Guillén said if the worker-owners want to see a post-pesticide world, they must put it into action.

“It’s more valuable for us to form a model and example of how farmworkers can grow food without pesticides,” Guillén said. “If we don’t grow organic ourselves, we can’t argue our point.”

Farmworkers are the first to be affected by pesticides, and the physical protection they might wear, like gloves, doesn’t always help. They still can’t remove every trace of pesticides from their bodies, Guillén said.

“Why do we have to go out in the fields looking like robots?” she said, referring to the protective equipment workers wear in the fields. “We just don’t want this stuff in the field. It is better that robots do it because it’s killing us.”

And then there’s the damage to the soil, air, water supply, and the pesticides that remain on food.

Torres sees symptoms of pesticide irritation among farmworkers: swollen eyes and faces and, once, white spots on a worker’s hands.

“As farmworkers, pesticides are harming us,” Torres said. “We don’t have the option of saying, ‘Do or don’t apply pesticides.’ We just go to work. We have to work at the mercy of whatever company is there.”

And to Torres, farming organic isn’t a way of growing that belongs to White, wealthy people—it’s traditional, and a practice passed down through generations.

“We’re all used to growing our food without the need of pesticides or chemicals,” he said of their ancestral heritage. “We want to follow that tradition to not use pesticides.”

Torres has fielded compliments on the Cooperativa’s produce and sees the product posted on social media, where the union and its workers are tagged. They’re set to buy 60 more acres in Lynden in the coming weeks.

The co-op’s 10-year vision includes 100 acres, 10 houses, meeting areas, and spaces where the farmworkers can practice their native art, Torres said. Most of the workers are indigenous, often Mixteco or Trique. 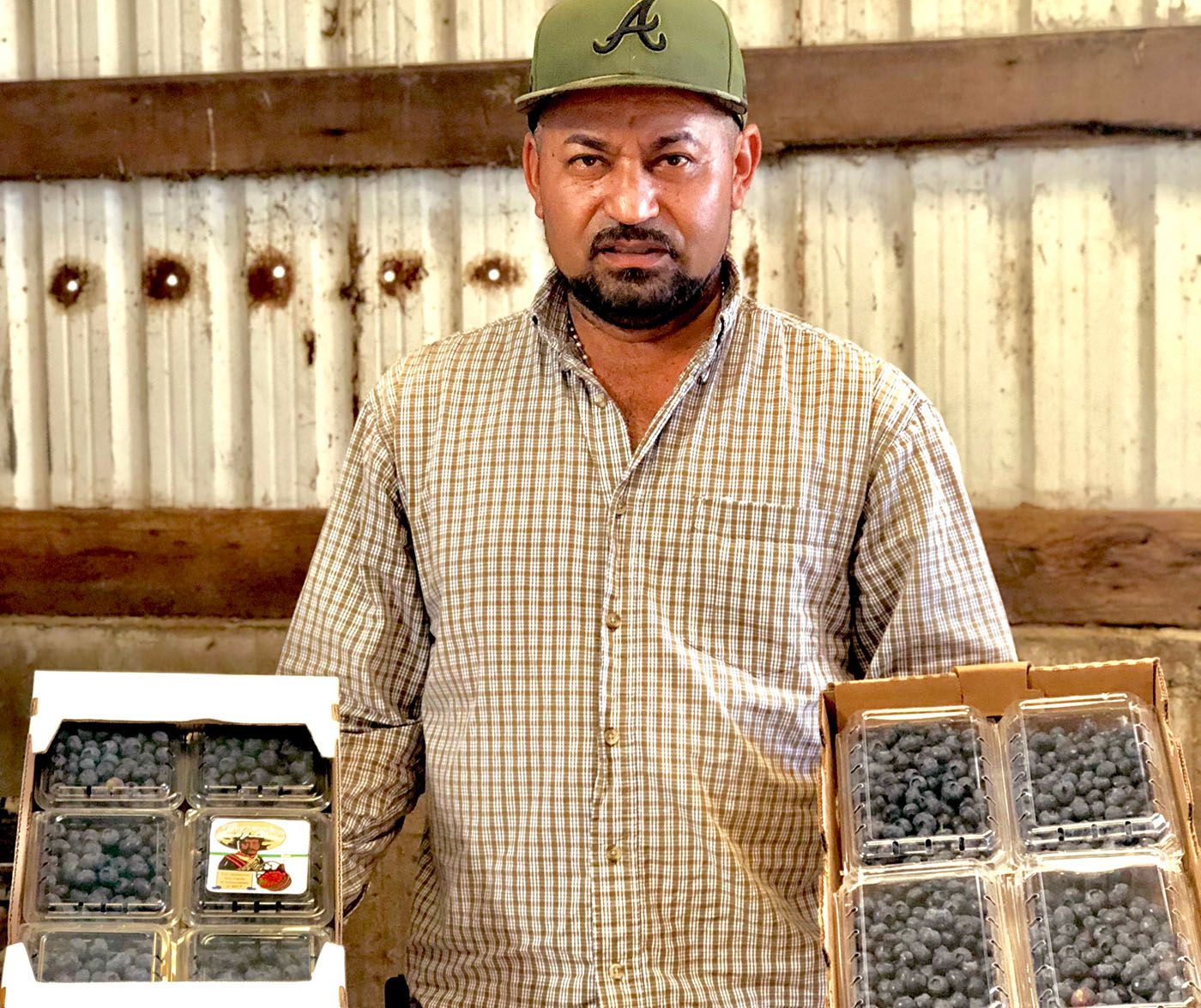 Pedro Torres, a worker-owner, holding up boxes of blueberries farmed at Cooperativa Tierra y Libertad. The farm co-op produces 150 to 200 boxes each week to sell in markets throughout the region. Edgar Franks / Community to Community

They’d also like to foster additional co-ops that will grow other crops, including testing different varieties of corn. If all goes as planned, the corn co-op would sell to a co-op tortilleria—building a “local, solidarity economy,” Guillén said.

Meanwhile, the co-op employs eight workers separate from the worker-owners and pays them $15 an hour. Guillén said the four worker-owners will start making money on their enterprise in about three years.

Torres continues to work other jobs to support his two kids until the union can provide full-time income. His wife also works as a union member.

“Right now I try to take advantage of harvest so I can make a little money,” he said. “It’s a lot of work, it’s not easy, but we’re moving slowly and advancing.”