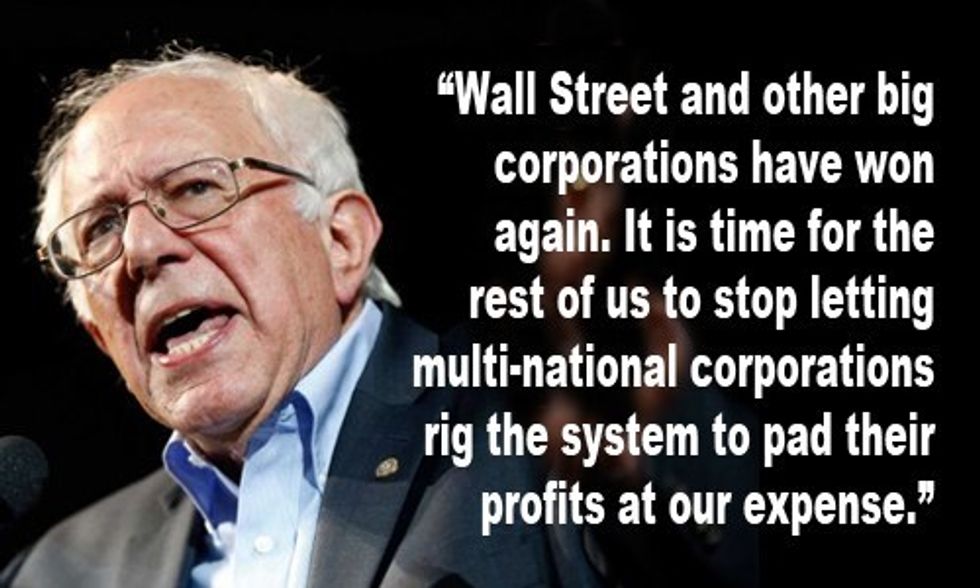 Amid a last minute scramble, leaders from the U.S. and 11 other Pacific Rim countries announced Monday that they had reached agreement on a sweeping trade deal, one that critics, including presidential candidate Bernie Sanders, say will slash standards and protections for both consumers and workers—with impacts to be felt across the globe.

The agreement, known as the Trans Pacific Partnership (TPP), which would tie together as much as 40 percent of the world's economy, has for nearly eight years been negotiated in secret. Though details of the compromise were not yet revealed early Monday, critics said that—minutia aside—the global trade pact will certainly be a boon for corporate power

Presidential candidate Bernie Sanders was also quick to condemn the deal. Saying he was disappointed but not surprised by the "disastrous" agreement, Sanders added: "Wall Street and other big corporations have won again. It is time for the rest of us to stop letting multi-national corporations rig the system to pad their profits at our expense."

The negotiations had been extended after talks got stuck over the issue of how long a monopoly period should be allowed on next-generation biotech drugs. The compromise reportedly reached between the U.S. and Australia "is a hybrid that protects companies’ data for five years to eight years," the New York Times reports, falling short of the 12 years desired by U.S. negotiators.

One of the more controversial aspects of the deal is the Investor State Dispute Settlement provision, which permits multinational companies to sue governments over allegations that profits were lost due to local regulations.

"Two fifths of the global economy will be covered by corporate courts, meaning a huge rise in governments being sued for protecting the public interest from corporate greed," Dearden explained. Then highlighting some of the other alarming provisions of the deal, he continued: "Medicine prices will rise as Big Pharma gets more power to monopolize markets. Small farmers will suffer from unfair competition with industrial scale agribusiness. No wonder this has been agreed in secret."

Chris Shelton, president of the Communication Workers of America, said the agreement is "bad news" for working families and communities. In a statement, Shelton said, "Despite broad promises from the Obama administration," the TPP "would continue the offshoring of jobs and weakening of our communities that started under the North American Free Trade Agreement" and "would mean labor and environmental standards that look good on paper but fall flat when it comes to enforcement."

"It’s a corporate dream but a nightmare for those of us on main street," he added.

It now falls on signatory governments to ratify the agreement. In the U.S., many members of Congress as well as presidential candidates have expressed skepticism over the pact, which heretofore had been largely undisclosed to legislators. Reportedly, the full 30-chapter text will not be available for another month.

Lori Wallach, director of Public Citizen's Global Trade Watch questions whether the pact will pass in Congress, given the amount of pushback the deal received when the U.S. House and Senate voted this summer to pass Fast Track trade promotion authority.

Wallach explains: "If there really is a deal, its fate in Congress is at best uncertain given that since the trade authority vote, the small bloc of Democrats who made the narrow margin of passage have made demands about TPP currency, drug patent and environmental terms that are likely not in the final deal, while the GOP members who switched to supporting Fast Track in the last weeks demand enforceable currency terms, stricter rules of origin for autos, auto parts and apparel and better dairy access for U.S. producers."

For his part, Senator Sanders said he "will do all that I can to defeat this agreement." in the U.S. Senate. "We need trade policies that benefit American workers and consumers, not just the CEOs of large multi-national corporations," he added.

In Canada, the deal comes just two weeks ahead of national elections. In a statement, Maude Barlow, national chairperson of the Council of Canadians encouraged Canadians to "vote against the TPP" during the upcoming election.

"Just what are we supposed to make of a deal that has been kept secret from the Canadian public?" Barlow asks. "Our own legislators don’t even know what’s in it."

"The Harper government has signed a deal that will lay off thousands of auto workers and put thousands of dairy farmers in jeopardy while giving even more foreign corporations the right to dictate Canadian policy," she continued, adding that "Stephen Harper negotiated the TPP during an election when his mandate is simply to be a caretaker government. Parliament now has the ability to vote on the TPP. We strongly encourage the next government to reject it."