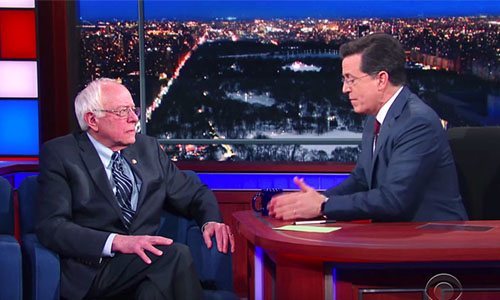 Stephen Colbert congratulated Bernie Sanders on his New Hampshire landslide and overwhelming (86 percent!) youth vote Wednesday night. “It’s like you’re puppy monkey baby,” Colbert said, referencing the Super Bowl ad. “Why do you think the young ones like you?”

“Two reasons,” Sanders responds. “One, by definition young people are idealistic. And they look at a world with so many problems and they say ‘why not’? Why can’t all people in this country have healthcare? Why can’t we make public colleges and universities tuition free? Why not?,” he said as the crowd cheered. “But the second part that I think young people are thinking about is how does it happen that even with all the technology and productivity and our economy, they are likely to have a lower standard of living than their parents, while almost all new income and wealth is going to the top 1 percent. They’re not dumb. They’re saying ‘we want a fair share as well,'” he continued.

“And how do you achieve that fairness,” Colbert presses. “Because the top 1 percent has a lot of influence with the government. They’re not just going to give it up. They’re going to fight you tooth and nail and I’ll tell you how I know,” Colbert continued. Sanders listens, dubiously. “I am in the top 1 percent,” Colbert tell him, adding, “to hell with that, the top 1 percent parks my car! I’m way higher than that.”

Colbert also asked Sanders about potential similarities between him and Trump, the GOP winner in New Hampshire. “Polls show there were a lot of people in New Hampshire that up until the last minute, hadn’t made up their mind between you and Donald Trump,” he tells the Senator.

“I think a lot of Donald Trump supporters are angry. They’re in many cases, working longer hours for low wages. They’re people who are really worried about what’s going to happen to their kids.” So yes, Sanders understands that people have a right to be angry, but scapegoating Mexicans or Muslims, as suggested in Trump’s “false message,” will not solve the underlying issue.

“People have a right to be angry. But we need to be rational in how we address the problems,” Sanders declared.