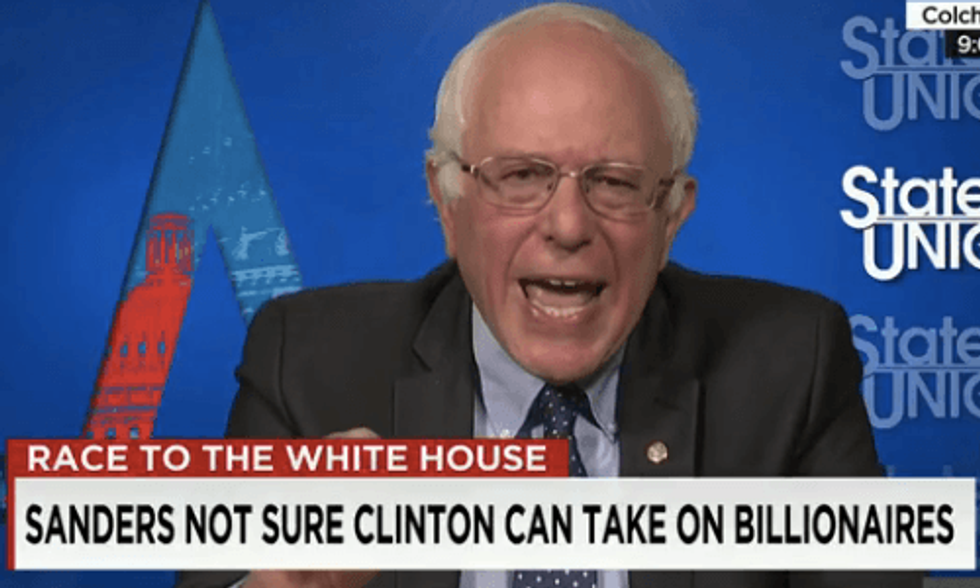 Presidential candidate Bernie Sanders is speaking out against the Democratic National Committee's (DNC) decision to hold only four general primary debates before the nomination, saying there needs to be room for specific topics, such as the environment.

.@BernieSanders isn't sure that Hillary Clinton can take on billionaires and says the "same old" won't cut it http://t.co/rGxvJYiBlM

In an interview with CNN's State of the Union (H/T ThinkProgress) on Sunday, Sanders explained, “I think environmentalists deserve a debate so we could talk about how we move aggressively to transform our energy system away from fossil fuel.”

The Vermont senator, who is catching up to Hillary Clinton in Iowa a new Bloomberg Politics/Des Moines Register poll shows, also went against his party's leadership and called for as many debates as possible.

“I think that that is dead wrong and I have let the leadership of the Democrats know that,” Sanders told CNN's Jake Tapper (as noted by The Nation). “I think this country benefits, all people benefit, democracy benefits when we have debates and I want to see more of them. I think that debates are a good thing.”

Sanders' words come after fellow Democratic presidential candidate Martin O’Malley called the DNC's decision to limit the number of primary debates "undemocratic" and "rigged" to aid Clinton, the Democratic front-runner, since the low number of debates makes it more difficult for him and other candidates to win the nomination.

“Four debates and only four debates—we are told, not asked—before voters in our earliest states make their decision,” the former Maryland governor said at the Democratic National Committee (DNC) Summer Meeting last week. “This sort of rigged process has never been attempted before. One debate in Iowa. That’s it. One debate in New Hampshire. That’s all we can afford.”

Sanders reportedly said he agreed with O’Malley on this position, but clarified on CNN, "I think 'rigged' is a strong word," and added, "I would like to see more debates."

Sheril Kirshenbaum, executive director of ScienceDebate, told ThinkProgress that she thinks voters should know where presidential candidates stand on a variety of science-related issues such as climate change, health and energy.

“People talk about these issues as if they’re just science issues and they’re really just human challenges,” she said. “No matter if you’re a Republican or a Democrat, they’re going to affect you and your family.”

As Evan McMurry wrote for AlterNet, Sanders is recognized for his glowing record on climate change, and even if he does not win the nomination, he can influence the debate, in part by framing climate change as a primary issue.

Also during his interview with CNN, Sanders further expressed the urgency to address the planet's climate crisis and the necessity to shift away from dirty energy.

“I believe, along with Pope Francis and almost all scientists, that climate change is threatening this planet in horrendous ways, and that we have to be aggressive in transforming our energy system away from fossil fuel and defeat the Keystone pipeline," he said. For emphasis, Sanders (once again) called out the former Secretary of State's noted silence on the controversial Keystone XL.

At a press conference in July, the Vermont senator said, “I have helped lead the opposition against the Keystone pipeline. I don’t believe we should be excavating or transporting some of the dirtiest fuel on this planet. I think Secretary Clinton has not been clear on her views on that issue.”