I was shocked to learn that last week the League of Conservation Voters (LCV) gave Sen. Bernie Sanders a score of 6 percent in their 2016 National Environmental Scorecard. LCV claims that Sen. Sanders received such a low score because he missed votes while he was running his historic presidential campaign. But there may be more to the story than we’re being told. 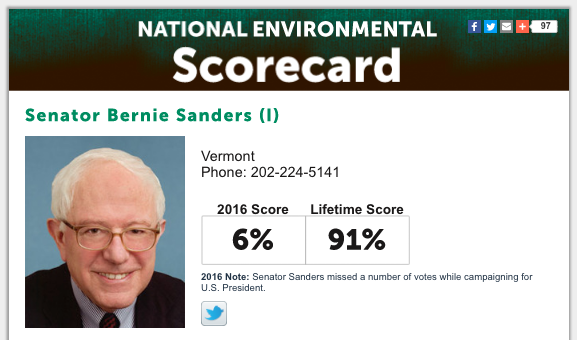 Those of you who have seen Gasland I and II know that fracking is very personal for me. One of the reasons I was a proud surrogate of Bernie’s is because he was the only candidate to call for a national ban on fracking. So when I see him being treated this way by an organization, whose board of directors is known to support and promote fracking, it’s also personal.

The bottom line is LCV’s scorecard system is flawed and fails to evaluate lawmakers on their full body of work. That’s why, according to their scorecard, pro-fracking senators like Mitch McConnell (R-KY) and Corey Gardner (R-CO) actually score higher than Bernie. That’s just plain ridiculous.

It’s no secret that LCV, who endorsed Sec. Clinton during last year’s primary, have contempt for Bernie. I experienced this firsthand while serving on the Democrat’s platform committee fighting for a national ban on fracking to be included as part of the party platform. The pushback I received from LCV Chairwoman Carol Browner, and many others from the Clinton camp, was astonishing. Not to mention the fact that LCV even endorsed candidates known to support the fracking industry and take their money—and 2016 was not the first time. This is antithetical to the organization’s mission statement, which includes a commitment to “electing pro-environmental candidates who will champion priority issues.” There is nothing pro-environment about fracking, and to say otherwise is nothing short of pronouncing alternative facts.

Bernie had the most ambitious climate platform in presidential history and he has continued his leadership since the campaign—standing up for Native American rights and against the Dakota Access Pipeline, standing up for environmental justice and standing up against President Trump’s agenda, which includes rolling back as many environmental regulations as possible and letting fracking run rampant throughout our communities.

At a time when we all have to come together, we should be standing with proven climate and environmental champions, not throwing them under the bus to score cheap points with the political establishment.

Please join me in telling the LCV to start acting like true environmental leaders and adjust Bernie’s score to account for his historic presidential campaign that consistently elevated climate change and environmental justice as national issues. LCV should also make a commitment to the people and its members that they will no longer support pro-fracking candidates and reflect accurate scores for lawmakers who promote or otherwise support this climate-altering practice.