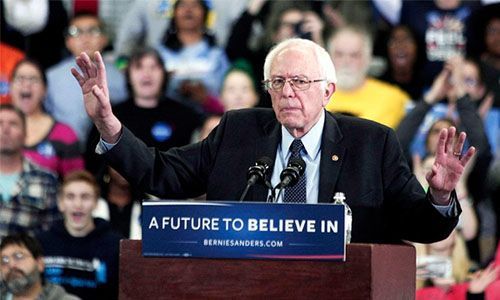 Speaking at a campaign stop in Michigan on Monday, Sen. Bernie Sanders said that the embattled community of Flint is the “canary in the coal mine” in a country that has seemingly endless money to spend on wars in the Middle East, but cannot afford to protect its citizens or rebuild its aging infrastructure.

“It is beyond my comprehension that in the year 2016 in the United States of America we are poisoning our children,” he told a crowd of more than 9,300 people at Eastern Michigan University after meeting with a number of Flint residents earlier in the day.

It is beyond my comprehension that in the year 2016, in the United States of America, we are poisoning our children.https://t.co/sB7MvNJZwm

“Can you imagine being a mother, seeing your own baby’s, your own child’s intellectual development, deteriorate in front of your very eyes?” he asked the crowd during a mid-afternoon rally. “That is happening all over that city.”

The remarks were met with chants from the crowd for arrest of Gov. Rick Snyder, whose resignation Sanders had previously demanded. “I’ve called for Snyder’s resignation, that’s fine,” the Vermont senator said again on Monday. “But if the local government cannot protect those children, if the state government cannot protect those children, then the federal government better get in and do the right thing.”

He also said that Flint “may be the worst example of a collapsing infrastructure, but it is not the only example.”

Sanders contrasted those who question the expense of replacing Flint’s damaged pipes and water infrastructure to the “trillions” spent on waging war in Iraq and Afghanistan. “When we went to war in Iraq, the trillions we spent there, not a problem,” Sanders said.

Throughout the campaign for the Democratic nomination, Sanders has repeatedly differentiated himself from his opponent Hillary Clinton over their opposing votes on the Iraq War—which she supported and he did not. Both candidates, however, have made the ongoing water crisis in Flint a focus of their campaigns with Clinton visiting the city earlier this month.

Later in the day, Sanders spoke at a rally at the United Auto Workers Local 600 union hall in Dearborn during which he repeated the criticism, saying: “If we can rebuild villages in Iraq and Afghanistan, we can damn well rebuild Flint, Michigan.”

After meeting with the victims of the water crisis, Sanders said that he was forced to ask himself: “What country am I living in? Is this the United States of America?”

“I fear very much that Flint is the canary in the coal mine here,” he added.