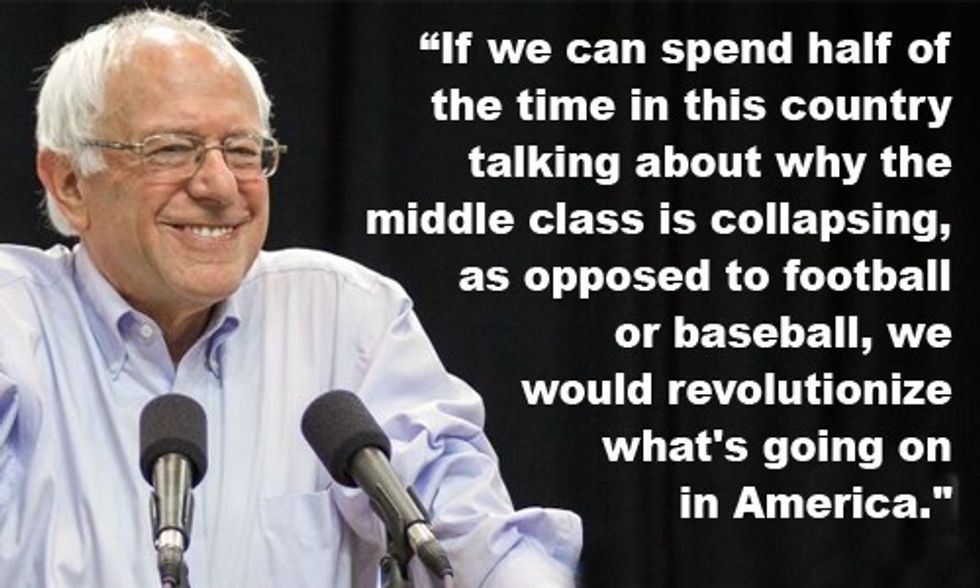 With recent polls showing Democratic presidential candidate Bernie Sanders closing the gap with rival Hillary Clinton and out-polling all of the GOP's leading candidates, progressives nationwide will host coordinated house parties on Wednesday to further fuel the fire of enthusiasm for the self-described democratic socialist.

On July 29, Sanders will address thousands of supporters live via streaming video from a home in Washington, DC. According to his campaign, more than 82,000 people have indicated that they plan to attend one of the more than 3,000 simultaneous local organizing meetings.

"We have a technology available to us that Barack Obama and Howard Dean did not have," the U.S. senator from Vermont said in an interview with the New York Times' First Draft. "And the idea that I can simultaneously be speaking to people located in 1,000 different places is pretty, pretty exciting." The candidate’s address will be followed by a planning meeting for anyone who wants to stay online and discuss joining his campaign.

In a wide-ranging interview with Vox published Tuesday, Sanders elaborated on this organizing strategy.

"I often make the joke, although it's not such a joke, that if we can spend half of the time in this country talking about why the middle class is collapsing, as opposed to football or baseball, we would revolutionize what's going on in America," Sanders told Vox.

"I want that discussion. I want to know why the rich get richer and everybody else gets poorer. I want to know why the United States is the only major country on Earth that doesn't provide health care to all of its people, the only major country that doesn't have family and medical leave so that women can stay home with their kids when they have a baby. Those are the questions we should be discussing."

His campaign bills the event as a chance to "begin to build the organization that will take this country back from the billionaire class." And while Sanders agrees that Wednesday's house parties offer the opportunity to establish "a grassroots movement of millions and millions of people," his goals go beyond his own political ambitions.

"We hope to have tens of thousands of people coming together to determine how they can develop movements in their local community," he said earlier this month. "This campaign is not simply about electing me, I hope we accomplish that, but that ain’t the most important thing. The most important thing is building a political movement in which millions of people who have given up on the political process, including a lot of young people, get involved."

The house parties will build on the energy and turnout Sanders continues to generate at rallies nationwide.

Over the weekend, Sanders brought his populist message to more than 4,500 people at the  Pontchartrain Center in Kenner, Louisiana. According to the New Orleans Advocate, the crowd was about four times larger as the roughly 1,000 people who came out to see Gov. Bobby Jindal when he announced he was running for president at the same venue in June.

"Some people told me Louisiana was a conservative state—guess not!" Sanders began his address. "I think my colleagues in the Democratic party have made a very serious mistake, and that is they have written off half of America, including Louisiana. And I'm here to tell you the time is now to fight for 50 states in the country."