Bernie Sanders: GOP Candidates Care More About Koch Money Than 'Preserving the Planet for Our Children' 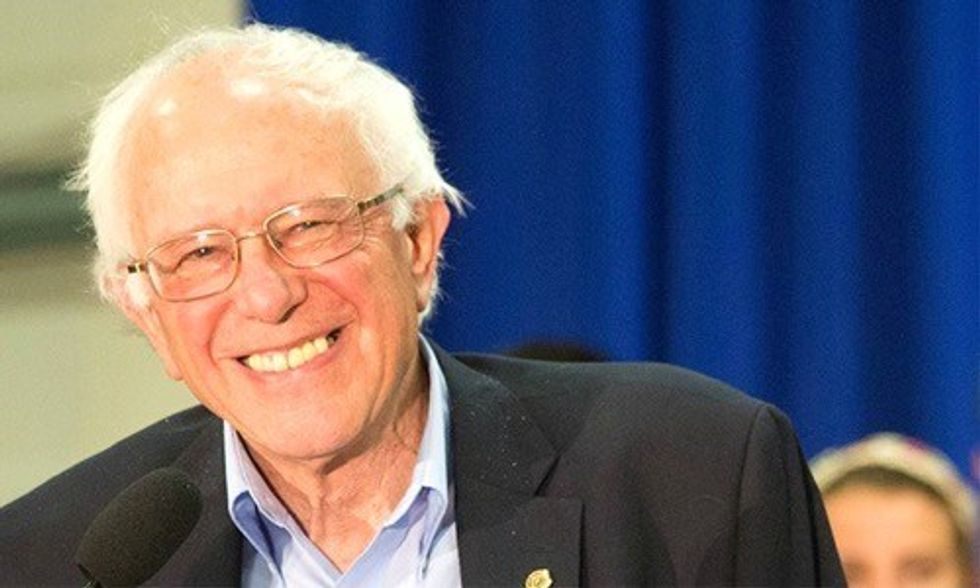 Republicans may not want to admit it, but when it comes to climate change, "the evidence is overwhelming," Bernie Sanders declared on Tuesday. Photo credit: Erik J. Olson / Flickr

"I find it unacceptable that many of my Republican colleagues are more worried about campaign contributions they're getting from the Koch brothers and others in the fossil fuel industry than they are about preserving the planet for our children and grandchildren," Sen. Sanders (I-Vt.) said in a statement urging the U.S. to take the lead in stopping global warming.

The U.S. senator made his remarks just hours after President Barack Obama, upon leaving the COP21 climate summit taking place in Paris, called for certain aspects of a climate change agreement to be legally binding—a demand that is sure to raise the ire of Republicans in Congress and beyond.

As the Guardian noted in its reporting on the president's press conference, "a majority of Republicans in Congress deny the existence of climate change or oppose action on it. In the run-up to Paris and while Obama has been at the summit, Republicans in Congress have repeatedly threatened to block climate aid to developing countries."

Meanwhile, the newspaper reported separately on Tuesday, "Republican presidential candidates have poured scorn on Barack Obama for his comments at the Paris climate talks."

Presidential candidate and U.S. Senator Ted Cruz (R-Texas), for example, told a gathering in Iowa that Obama "apparently thinks having an SUV in your driveway is more dangerous than a bunch of terrorists trying to blow up the world." And Mike Huckabee, former governor of Arkansas, tweeted along similar lines, calling Obama "clueless" and mocking him as "meteorologist-in-chief."

Indeed, even Obama's call on Tuesday for the agreement to have some legally enforceable elements is a step back from what the European Union and developing countries have pushed for: a legally binding agreement, such as the Kyoto protocol. But such a treaty would be a non-starter in the Republican-controlled U.S. Congress.

Obama decried Republican climate denial in his press conference, noting that "there's a reason why you have the largest gathering of world leaders probably in human history here in Paris. Everybody else is taking climate change really seriously. They think it's a really big problem."

"It spans political parties," he continued. "I mean, you travel around Europe and you talk to leaders of governments and the opposition and they are arguing about a whole bunch of things. One thing they're not arguing about is whether the science of climate change is real and whether or not we're going to have to do something about it."

Recent studies have shown how corporations, led by ExxonMobil and the Koch family foundations, drive such anti-science ideology through the creation of climate disinformation think tanks and dissemination of coordinated contrarian messaging in mainstream media and public discourse.

Still, with a new poll showing that 63 percent of Americans support the U.S. signing onto a binding international agreement to curb greenhouse gas emissions, one can only hope the tide is shifting.

"The evidence is overwhelming," Sanders declared. "Droughts, floods and severe storms already are impacting the planet and the situation will only become worse in years to come."

U.S. Sen. Harry Reid’s Letter to the Future: ‘You Deserve a Chance’