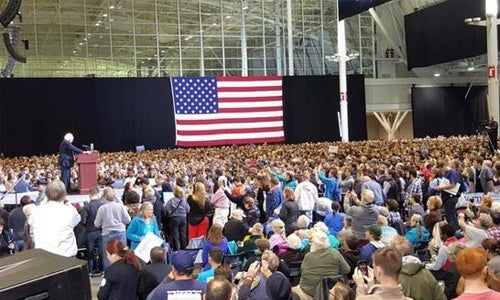 Tens of thousands of supporters turned out at the Boston Convention Center to see Sanders speak—skyrocketing numbers that are now typical for the senator from Vermont whose run at the White House for 2016 once seemed like a long shot.

According to campaign staffers, an additional 4,000 people joined an overflow room at the convention center after the main venue filled to its 25,000-person capacity, while others braved the cold to watch his speech outside on a Jumbotron. One attendee tweeted that at least 32,000 people had shown up to #FeelTheBern:

“Welcome to the political revolution,” Sanders told the cheering audience.

He then launched into a critique of the U.S. justice system, which he described as “broken and … in need of deep reform.” He slammed “an institutional racism that allows and continues to allow unarmed African Americans to be killed by police,” referring to a recent spate of high-profile killings that galvanized the Black Lives Matter movement. He echoed many of that campaign’s demands, including accountability for officers and an overhaul of the prison-industrial complex.

And “when a police officer breaks the law that officer must be held accountable,” he said.

Sanders also spoke about Thursday’s mass shooting at Umpqua Community College in Roseburg, Oregon, in which nine people were killed, and linked it to the attack in June on Emanuel A.M.E. Church in Charleston, South Carolina, when a white gunman killed nine black parishioners.

“All of us are disgusted, frustrated, bewildered in seeing every month, every two months, a sick individual walk into a school, walk into a church, take out a gun and start killing people,” Sanders said. “Our hearts go out to the people of Oregon for what they have experienced in the last few days.”

He said it was time for the U.S. to close the legal loopholes which allow unlicensed gun sellers to deal without performing background checks on clients, “end the sale and distribution of semi-automatic weapons whose only goal is to kill people,” and start “a revolution in terms of mental health in this country.”

“Maybe if we do all of these things we can lessen the likelihood of these horrendous disasters,” Sanders said.

He also paid homage to Massachusetts native and fellow progressive icon Sen. Elizabeth Warren, remarking, “As your Senator Elizabeth Warren reminds us, this is a rigged economy. Heads they win, tails you lose.”

“Wages in this country are just too damn low,” he said.

Sanders’ big night in Boston follows other recent advances, including new polls that show him surpassing Hillary Clinton, his chief rival for the Democratic nomination, in key battleground states. And after publicly eschewing big money and Super PACs at the start of his campaign, Sanders announced on Thursday that he had raised at least $26 million from a collective 650,000 donors.