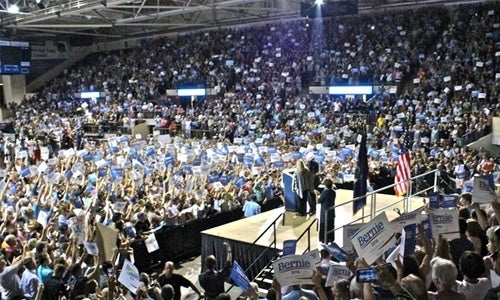 Maine is a small state—1.3 million. Its largest city is Portland, with a population of 66,000.

Maine is one of the few states where presidential national delegates are chosen at local caucuses. The Maine Democratic Presidential Caucuses will be held on March 6, 2016—8 months from now. And the General Election is still 16 months away. 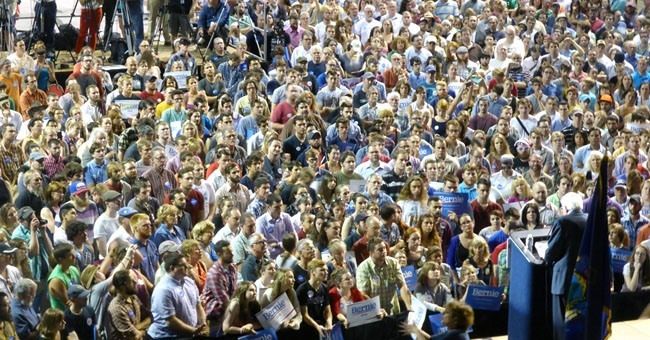 US Senator Bernie Sanders speaking to a packed house of more than 9,000 at the Cross Arena in Portland, Maine on July 6. Photo credit: Common Dreams photo/CC

The Sanders campaign originally booked Portland’s Ocean Gateway, a venue that holds about 800 people standing. Soon, thousands of RSVPs were pouring in and the event was moved to the much larger Cross Insurance Arena.

The Cross Arena (formerly Cumberland County Civic Center) is Maine’s largest concert venue, seating up to 9,500. (In 1977, Elvis Presley was due to kick-off his new concert tour here but was found dead at his Graceland Mansion the day before).

An hour before the rally’s scheduled 7 p.m. start time, long lines snaked through downtown Portland with thousands waiting to get in. (The Common Dreams offices are just a block away).

The 2016 election may be 16 months away, but you wouldn’t know it from the thousands of people who turned out Monday evening to cheer on Democratic presidential candidate Bernie Sanders at the Cross Insurance Arena in Portland.

What was scheduled as a town hall forum had become a full-blown rally by Monday night. Sanders’ speech was delayed by 20 minutes as organizers let in the throngs of people still awaiting entry. Estimates pegged the crowd at 8,000 to 9,000 people.

(At 7:15 p.m., several of our staff writers were turned away at the doors to the then-full arena; a couple hundred seats behind a curtain were blocked off keeping the turnout number below the 9,500 figure). 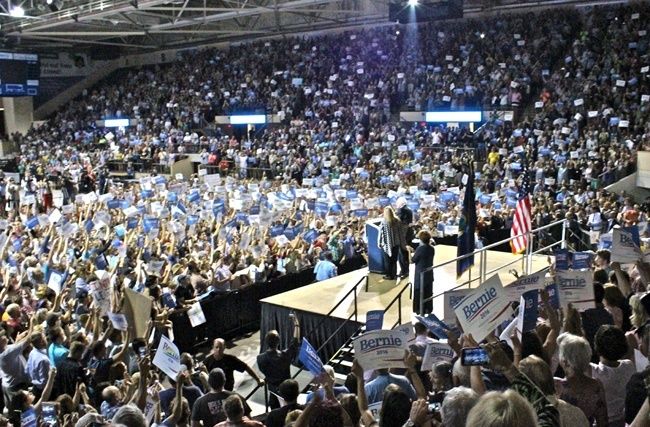 Maine political circles are still buzzing about the gathering—not just the size of the audience, but the crowd’s youthful energy and intensity.

It was epic. And, as Bernie Sanders says, “This campaign is catching fire for a simple reason, and the simple reason is we are telling the truth.”