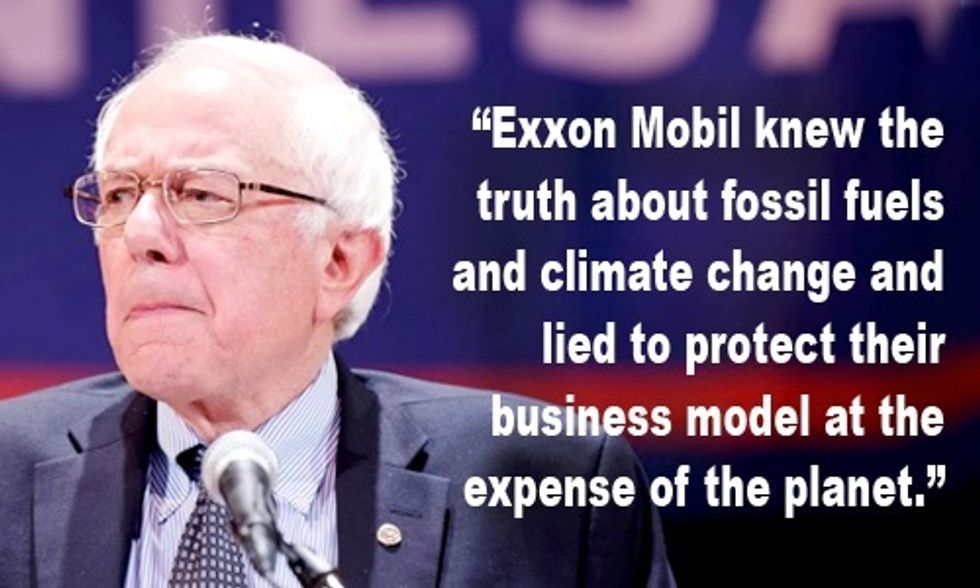 Arguing the oil giant's behavior may "ultimately qualify as a violation of federal law," Sen. Bernie Sanders (I-VT) on Tuesday joined a chorus of voices calling on the U.S. Department of Justice to launch an official fraud investigation into Exxon Mobil's decades-long efforts to suppress the scientific connection between carbon emissions and climate change.

"Based on available public information, it appears that Exxon knew its product was causing harm to the public, and spent millions of dollars to obfuscate the facts in the public discourse. The information that has come to light about Exxon’s past activities raises potentially serious concerns that should be investigated," Sanders wrote in a letter to Attorney General Loretta Lynch.

"Exxon Mobil knew the truth about fossil fuels and climate change and lied to protect their business model at the expense of the planet," Sanders added in a statement.

Sanders, who is running for president in 2016 as a Democrat, cited a recent investigation by Inside Climate News that revealed Exxon may have known about climate change and the role of fossil fuels in exacerbating global warming as far back as 1977 and spent millions of dollars funding a misinformation campaign to cast doubt on scientific information as it emerged to the public.

The resulting harm to the environment and public health are akin to the effects of the tobacco industry, which similarly denied the dangers of cigarettes for years, Sanders said. That industry was ultimately tamed by convictions through the Racketeer Influenced and Corrupt Organizations (RICO) Act.

One of the prosecutors who helped win the case against Big Tobacco echoed that call on Tuesday, telling ThinkProgress, "I think a RICO action is plausible and should be considered" against Exxon.

"It appears to me, based on what we know so far, that there was a concerted effort by Exxon and others to confuse the public on climate change," Sharon Eubanks said. "They were actively denying the impact of human-caused carbon emissions, even when their own research showed otherwise."

Citing Lynch's recent pledge to take a stronger stance again corporate crime, Sanders called for the creation of a investigative task force in relation to the allegations against Exxon.

With his letter, Sanders joined a growing number of lawmakers and activists demanding federal investigation into Exxon's climate denial efforts. U.S. Reps. from California Ted Lieu (D-Los Angeles) and Mark DeSaulnier (D-Walnut Creek) penned a similar missive to Lynch last week, writing, "If these allegations against Exxon are true, then Exxon's actions were immoral ... We request the DOJ investigate whether ExxonMobil's actions were also illegal."

Lieu also compared Exxon's actions to those of the tobacco industry. ""Exxon's situation is even worse," Lieu told the Los Angeles Times last Wednesday. "It was taking advantage of the science ... while denying the facts to the public."

The congressmen's letter came on the same day climate activist and 350.org co-founder Bill McKibben staged a one-man protest at an Exxon gas station in Burlington, Vermont, where he blocked a gas pump until being arrested, and told media that "We need to let people know what we now know about Exxon Mobil. In a noisy world, this may be what we have to do."

McKibben called Exxon's mission to suppress climate information for the corporation's own gain "unparalleled evil." He and Lieu appeared on Democracy Now! today calling for a DOJ investigation.

"It's difficult to think of a company that could have set back humanity for decades, and perhaps permanently," Lieu said. "But that's what happened here."