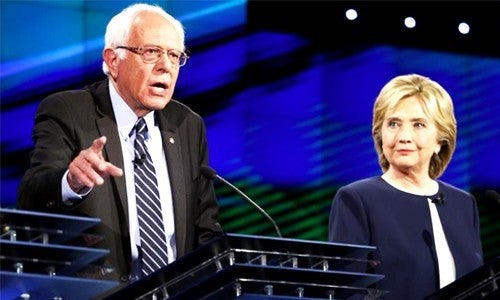 The Democratic party’s first presidential debate of its 2016 candidates showed the country that the party has stronger candidates and a clearer common agenda than many people may have expected after a summer dominated by the antics of angry Republicans.

#DemDebate: The finer points on US foreign policy http://t.co/tCWKBqeZO1 pic.twitter.com/Xd9jB3xRbt

Despite what individual candidates may claim, there was not a clear winner. Bernie Sanders, after a nervous start in his first nationally televised debate, found his footing and demonstrated how he fundamentally has reshaped the Democratic party, pushing all the candidates to embrace his strong views about income inequality and the need for dramatic responses to capitalistic excess. There has not been a presidential debate in recent memory with such a detailed economic discussion and the need for remedies that would boost wages, workplace benefits, healthcare and other pocketbook concerns. All the candidates supported a federal family leave law for mothers of newborns, for example. And all agreed that wealthy Americans should foot the bill.

Hillary Clinton also demonstrated why she is the front-runner and likely to remain so. Where Sanders was passionate and emphatic, she was poised and forcefully pushed policy specifics that she said could be enacted and make a difference. She firmly rejected the moderator’s characterizations that she took politically expedient positions and said she was proud to be a “progressive” who “wants to get things done.” On a string of issues, she was not a centrist Democrat in the mold of her husband, former President Bill Clinton, saying, for example that she supported stronger gun controls, criminal justice reform, comprehensive immigration reform, medical marijuana and opposed the latest international trade agreement.

The other three candidates were largely asterisks to the Sanders-Clinton interchange. Ex-Rhode Island Gov. Lincoln Chaffee, ex-Virginia Sen. Jim Webb and ex-Maryland Gov. Martin O’Malley sought to distinguish their records and values—with O’Malley giving the most detailed prescriptions. But in most instances their comments lingered in the debate’s shadows, with the exception of O’Malley’s closing remarks where he said that unlike the two previous Republican presidential debates, no candidate denigrated women, made racist statements about immigrants or spoke ill of the other candidates.

There were important differences, however, between the positions taken by Sanders and Clinton on a half-dozen issues, which illustrates both how much Sanders has pushed the Democratic Party to the left—and how Clinton has staked out savvy positions that may sound more progressive to Sanders backers than would prove to be the case if elected. Without Sanders’ presence in the race, it is doubtful that Wall Street’s excesses, which is shorthand for where and how wealth is accumulated but not shared, would be targeted for reforms by all the candidates.

For example, Sanders wanted to increase Social Security retirement benefits and would pay for that by removing a cap that only taxes the first $118,000 of income. Clinton said that she would raise payments for impoverished seniors, especially women. Sanders said he favored a Nevada ballot measure legalizing recreational marijuana, while Clinton said she only favored legalizing medical marijuana. Sanders wants tuition at public colleges and universities to be free, saying he would pay for that with a Wall Street financial transaction tax. Clinton said that she would like free tuition too, but would include a weekly 10-hour work requirement. Only on gun control was Clinton to the left of Sanders, who did a poor job of responding to her attack on his stance—where he has opposed militarized weapons but supported hunters’ rights.

On the crucial issue of reigning in Wall Street’s excessive greed, Sanders said that he would break up the biggest banks and restore the Depression Era Glass-Steagall Act, which barred commercial banks from investing in speculative financial deals. Clinton said that she would not restore Glass-Steagall but instead spoke of regulating speculators and risky investments, jailing executives who break the law and looking for the emerging threats posed by non-traditional firms. Sanders replied that she was “naive” if she thought Wall Street would do the right thing because a president was pressuring them.

Nonetheless, these stances by Clinton are shrewd, in so far as they show that she agrees with most of what Sanders is saying is the problem, but her solutions—while clearly left of center—aren’t as threatening to their targets and sound more moderate. While Democrats may be wringing their hands over these differences, saying that they represent a gulf between systemic and incremental reform, it’s noteworthy that there’s almost no crossover or common ground with the Republican candidates, with the exception of saying criminal justice reform for non-violent crimes was needed.

On matters of war and peace, while the candidates had some differences—all were opposed to the kind of adventurist foreign policy of the Bush Administration, which launched a war of choice in Iraq and ignited chaos in the region that continues. They did not want to send ground troops into Syria, nor did any of them believe that Russia’s Putin was trustworthy. They praised President Obama’s restraint for what Sanders termed a “quagmire within a quagmire.”

The candidates, especially Sanders and Webb, said that none of their progressive agenda items would become a reality unless there were changes to the current campaign finance system, where several hundred of the wealthiest Americans are bankrolling most of the presidential campaigns and congressional contests. While Webb pointedly told Sanders that his grassroots “revolution” was not going to happen, Sanders repeatedly said that a record high voter turnout and public protests would force Congress to respond.

Stepping back from the debate stage, it was a good night for all the Democrats. Nobody made any mistakes. All the candidates gave strong presentations of their positions, even if Sanders got off to a somewhat tense start and Clinton showed right off the bat that she was comfortable on the stage. There were even moments of levity, such as when Sanders told the audience and country that everyone was tired of hearing about Clinton’s private e-mail server when she was the Secretary of State—for which she thanked him. And Sanders, unlike any of the other candidates, mentioned the name of African-Americans killed by police in an answer that strongly supported the Black Lives Matter movement.

Another big takeaway is that this debate will probably prompt Vice President Joe Biden to reconsider his presidential ambitions. With Sanders setting the domestic agenda and Clinton embracing much of what he says, but presenting it in a smoother way that likely to have greater appeal across the country—outside its liberal epicenters—there seems to be no void that a Biden candidacy could fill. If anything, Clinton is running to defend Obama’s record and legacy, while Sanders is running to take it to a new orbit, where federal safety net programs would be expanded to assist working- and middle-class Americans.

As the candidates continue to campaign in coming weeks, it clearly helps Clinton that Sanders is a strong campaigner and revving up the Democratic base. If she continues to be the front runner, she will have to find ways to bring Bernie’s base into her fold. That will be worth watching. In the meantime, Sanders has made a career of confounding expectations and has the stamina of a long-distance runner. The contest for the 2016 Democratic nomination isn’t over by any means, but it’s getting more compelling.