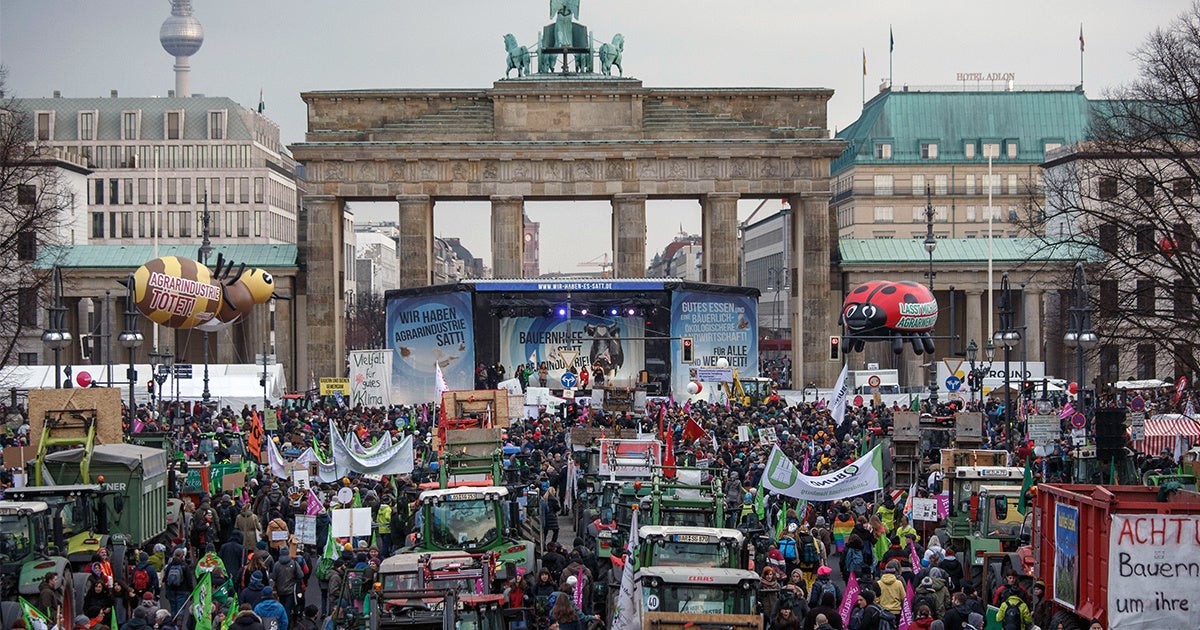 Organizers said 35,000 people marched through the streets of the German capital on Saturday to say they’re “fed up” with industrial agriculture and call for a transformation to a system that instead supports the welfare of the environment, animals and rural farmers.

Many held placards reading “Eating is political” at the action in Berlin, which coincided with the so-called “Green Week” agricultural fair.

The protest also featured a procession of 170 farmers driving tractors to the rally at the Brandenburg Gate.

“This protest,” said Green party co-leader Robert Habeck, “shows that the desire for a different agricultural policy is now undeniable.”

“Protesters called out by some 100 organizations asserted that alleviation of climate change and species depletion required a reorganization of EU farming policy, including subsidies, currently amounting to €60 billion ($68 billion) annually, including €6.3 billion allocated in Germany.
That flowed mainly to larger companies focused on boosting yields, they said, but instead the funds should be distributed better to avert further farmyard closures and rural village die-offs.”

“With over €6 billion that Germany distributes every year as EU farming monies, environmental and animal-appropriate transformation of agriculture must be promoted,” said protest spokesperson Saskia Richartz.

Slow Food Europe captured some of the scenes on social media, and stated in a Twitter thread: “We believe that instead of propping up agro-industries, politicians should support the determination of small-scale farmers to keep climate-friendly farms, which are the future of agriculture.”

We are fed up!

Thousands of people armed with pots and pans, raise the alarm for sustainable farming today in #Berlin, and ask for a climate-friendly food system, good food and the continuation of small-scale, community-based farming. @SlowFoodH pic.twitter.com/NB0RqwaLAY

100,000 small-scale farms disappeared in #Germany over the past decade. We believe that instead of propping up agro-industries, politicians should support the determination of small-scale farmers to keep climate-friendly farms,which are the future of agriculture #Wirhabenessatt pic.twitter.com/l2VoVf6Ask

The “inspiring gathering” capped off a week in which thousands of youth climate protesters in Europe, including at dozens of actions in Germany, rebuked the lack of urgent action to address the climate crisis.

Noted activist and Swedish student Greta Thunberg, whose “strikes for climate” have inspired similar actions across the globe, nodded to the Swiss and German actions, writing Friday on Twitter: “The people are rising. The world is at a tipping point. Now we have to continue pushing hard! Everyone is needed. This is just the beginning.”

"The food we eat and how we produce it determines the health of people and the planet, and we are currently getting this seriously wrong." #FoodisMedicine @drmarkhyman
https://t.co/7NOb7817bn