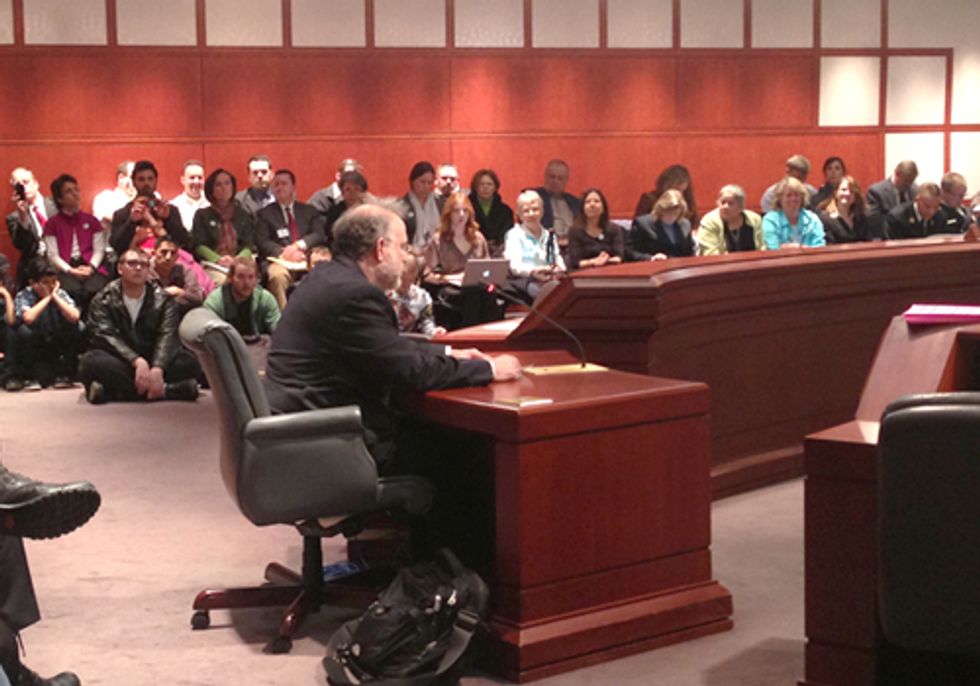 Today, more than 200 residents from Connecticut gathered at the State Capital in Hartford to testify on behalf of HB 6519, a bill to require the labeling of genetically modified food sold in the Constitution State.

Connecticut mothers and farmers were joined by expert witnesses from across the country, including top international scientists, leading national grassroots activists and co-founder of the famous Vermont ice cream company Ben & Jerry’s, who traveled to Hartford to testify in front of the Public Health Committee in favor of passing a bill to require the labeling of genetically modified organisms (GMO).

Jerry Greenfield, the co-founder of Ben & Jerry’s, testifies on behalf of HB 6519, a bill to require the labeling of genetically modified food sold in the Constitution state.

“Increasingly, Americans are demanding openness and transparency in our food supply. Ben & Jerry’s is proud to stand with the people of Connecticut by supporting mandatory labeling of genetically engineered foods,” said Jerry Greenfield, the co-founder of Ben & Jerry’s, who recently announced that his company had committed to switching to all non-GMO ingredients in its ice cream products by the end of the year in order to meet the growing demand by consumers.

Greenfield and Ben & Jerry’s has also been a key ally in the effort to win mandatory labeling of GMOs in his home state of Vermont, and delighted legislators and activists with not only his testimony, but also samples of his famous ice cream.

“Today’s public hearing was a critical step in this effort to ensure that Connecticut consumers have a right to know what’s in their food so they can protect their families,” said GMO Free CT’s Tara Cook-Littman. “We are grateful to our legislative champions for their work thus far, and we are committed to seeing this through to a successful passage in the Connecticut General Assembly.”

Traveling from Iowa, where 97 percent of soybeans and 91 percent of corn is genetically engineered, Dave Murphy, the founder and executive director of Food Democracy Now! was greatly encouraged by the day’s public hearing before the Connecticut legislature.

“The testimony heard today in Connecticut, is another sign of the growing movement that is spreading across the United States of concerned mothers and citizens who are dedicated to winning mandatory GMO labeling,” said Murphy. “Polls regularly show that more than 90 percent of Americans want labeling of genetically engineered foods, so why no labeling of GMOs in the land of the free?”

For activists across the U.S. there is a sense of growing urgency in passing a common sense labeling bill, with 13 new GMO crops awaiting approval at the USDA and genetically engineered salmon on the verge of being approved at the FDA.

“The time for GMO labeling has come,” said Murphy, who also served as the co-chair of Prop 37. “All America needs, is one brave legislature and one brave governor to stand up for a mother’s right to know what’s in the food they’re feeding their families and other states will follow.”

The Right to Know GMO—A Coalition of States is a coalition of 37 states that have banded together with the common goal of winning mandatory labeling of genetically engineered foods in the U.S. They have teamed up to fight for the right to know what’s in our food.