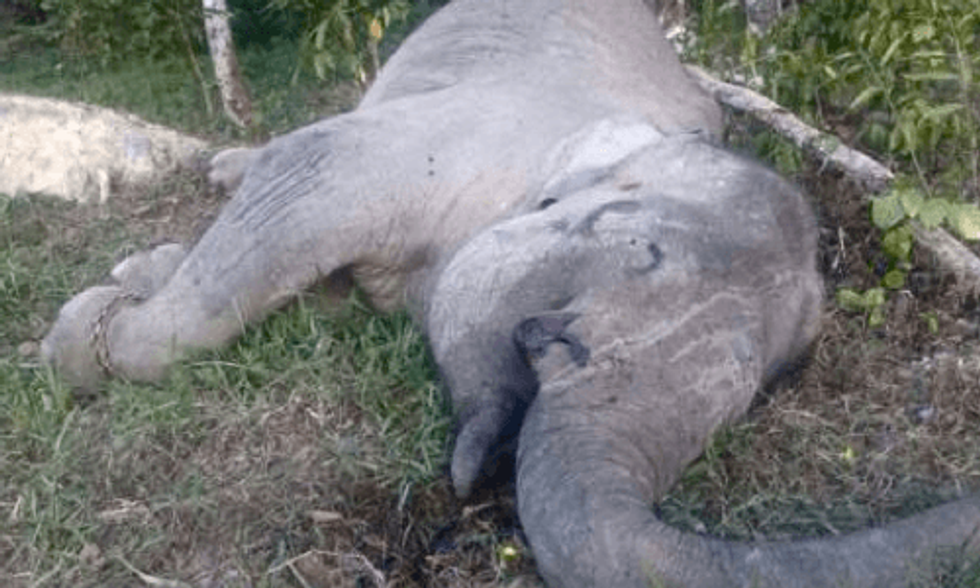 The brutal killing of a beloved elephant in Indonesia has sparked online anger, similar to the global outrage from the killing of Zimbabwe's Cecil the lion.

According to AFP, it's suspected that Yongki, a 35-year-old Sumatran elephant who helped patrol Indonesian jungles, died of poisoning at the hands of poachers. His maimed and bloodied body was found nearby a camp at the Bukit Barisan Selatan National Park where he had lived.

He was found Friday around 7:30 p.m with his three-foot long tusks hacked off, "leaving just bloody stumps," with his legs still bearing the chains placed onto him by his keepers to ensure he stayed in the camp, the news agency reported.

"We are mourning the lost of an elephant who has been helping us in handling conflicts and helping forest rangers patrol the forest, and he was a good elephant," Nazaruddin (who goes by one name), the head of the Indonesian Mahout Forum, told AFP.

A report from The Washington Post explains why Yongki will be sorely missed:

Along with his mahouts—a term used across south and southeast Asia for elephant riders—the lumbering creature was a member of a conservation response unit, or CRU, that sought to protect the natural habitat.

Every day, Yongki and his human partners would patrol the dense jungles of southern Sumatra. With a mahout on his back, he would trudge along paths too treacherous for any mechanized vehicle, on the lookout for ivory poachers, illegal loggers or farmers encroaching on protected parkland.

Yongki also had another duty: liaising between species.

Sumatran park rangers use tame elephants like Yongki to drive wild elephants back into the jungle, avoiding clashes between elephants and farmers who have been known to take revenge upon the animals.

Yongki's grisly murder highlights the gruesome nature of the (often illegal) ivory trade, in which mostly elephants are targeted for their tucks by poachers. About 100 elephants are killed each day in the trade, and the act could push some species to the brink of extinction in a handful of years.

There are currently 2,400-2,800 Sumatran elephants left on the planet. According to the World Wildlife Fund, these animals went from “endangered” to “critically endangered” in 2012 after half of its population was lost in a single generation mostly due habitat loss and human-elephant conflict.

Word is getting out after photos and news of Yongki's murder surfaced online. There is currently an online petition urging Indonesia's Attorney-General H.M. Prasetyo to take action and prosecute the culprits responsible for the elephant's killing. The hashtag #RIPYongki is also trending on social media worldwide.

The death of Yongki is extremely heartbreaking and cruel. Animals deserve kindness and compassion just as much as we do. #RIPYongki
— lauryn stathem (@lauryn stathem)1442936611.0