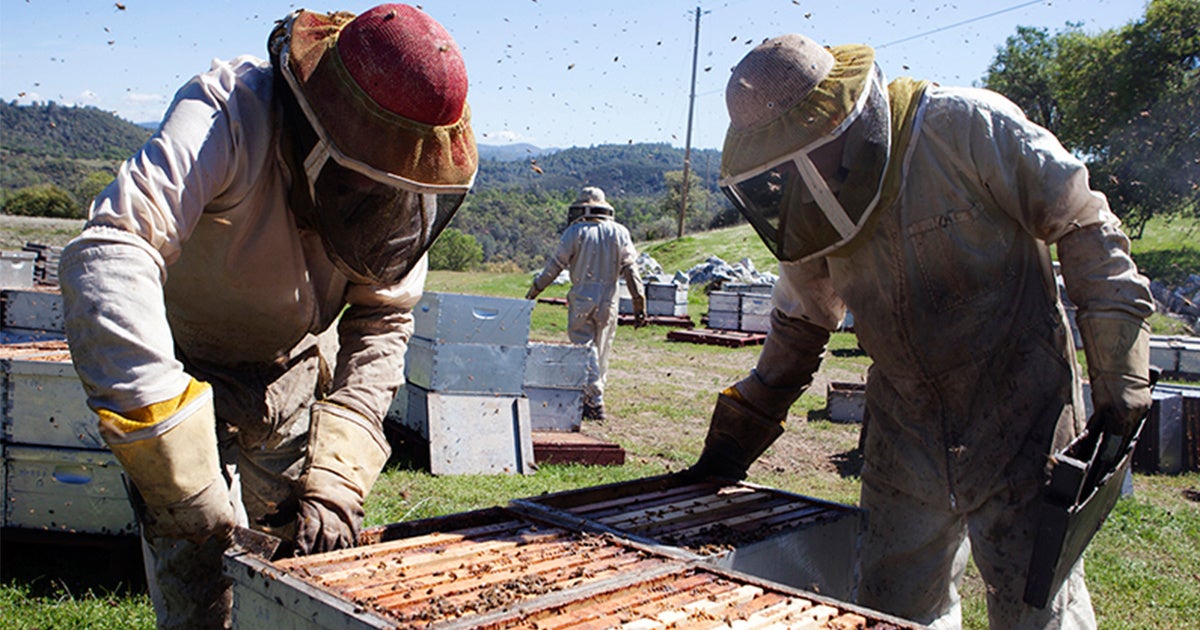 Beekeeper Jeff Anderson works with members of his family in this photo from 2014. He once employed all of his adult children but can no longer afford to do so. CHRIS JORDAN-BLOCH / EARTHJUSTICE

It’s been a particularly terrible summer for bees. Recently, the U.S. Environmental Protection Agency (EPA) announced it is allowing the bee-killing pesticide sulfoxaflor back on the market. And just a few weeks prior, the USDA announced it is suspending data collection for its annual honeybee survey, which tracks honeybee populations across the U.S., providing critical information to farmers and scientists.

The Trump administration pushed for these two anti-bee actions, even though our nation’s honeybee populations have been nosediving for years. Last winter, beekeepers reported a record 40 percent loss of their colonies.

Longtime beekeeper Jeff Anderson, owner of California-Minnesota Honey Farms, says the picture is even grimmer if you look at bee losses across the entire year, particularly in the spring and summer when farmers are spraying pesticides. It’s not just bees that are suffering, he says. Beekeepers are also feeling the sting of the Trump administration’s anti-bee and anti-science efforts. And consumers of healthy, fresh foods are next. 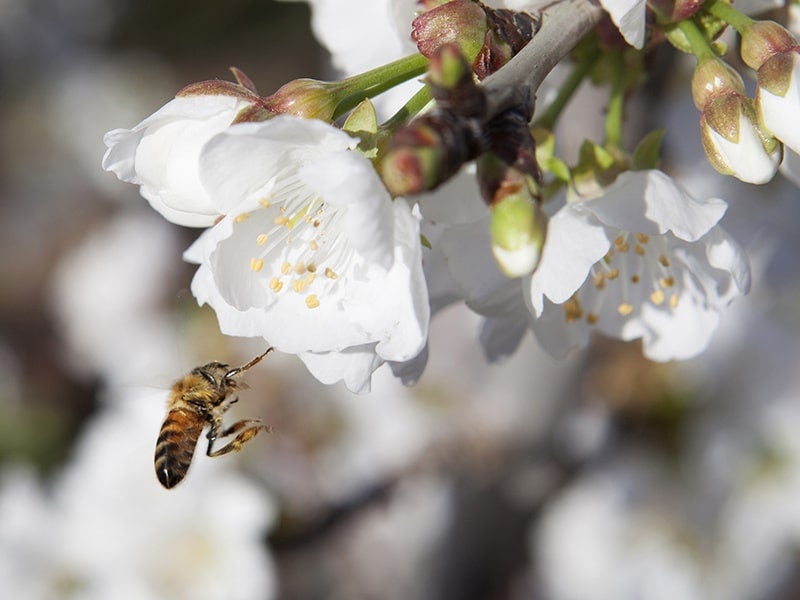 A honey bee alights on a cherry blossom in Stockton, California.

Were you surprised to learn that the USDA pulled its honeybee colonies report?

No. The USDA quit doing the honeybees survey because they absolutely don’t want to document what’s happening, because then they’d have to do something about it.

How do you feel about the EPA reregistering sulfoxaflor?

One thing that stood out to me in the EPA’s notice is that it said it’s “providing long-term certainty for U.S. growers to use an important tool to protect crops and avoid potentially significant economic losses, while maintaining strong protection for pollinators. The wording, “long-term certainty … to use,” seems totally wrong for a regulatory agency to make a promise like that. It predisposes a defensive position for all decisions going forward.

Basically, the EPA’s buddies at Dow AgroSciences want to make billions on this pesticide, and the EPA is going to let them. But please don’t lie to us and say that sulfoxaflor is somehow pollinator safe. I’m not buying.

Why do bees get such short shrift by regulators and legislators?

Beekeeping has always been the ugly stepchild in agriculture. Agriculture needs us, but not everybody in agriculture needs us. Corn growers and wheat growers don’t need my bees. Cherry, almond and blueberry growers need my bees. Any of the healthy foods that are in our diet need insect pollination, and if you want to eat chicken, beef, whatever, most of that doesn’t need my bees. But when it comes to our healthy, nutritious foods like nuts and fruits, almost all of those need insect pollination.

Farmers know that pesticides are a problem. In Minnesota, the standard question I get from farmers when I walk into a room or get gas at a gas station is, “How are the bees doing?” I tell them, “Well, not so good.” And it’s getting to be that most farmers these days will say, “It’s all these chemicals, isn’t it?” I tell them, “It should give you some pause to think about that because you and I are next. We just haven’t started coughing as much yet.”

Our environment is sick and our bees are a good indicator when that’s the truth. When my beehive gets sick, there’s something not right within the flight range of those bees. But the chemical industry is the one who speaks for everybody on the Hill, so it doesn’t matter what farmers think. That’s the reality. 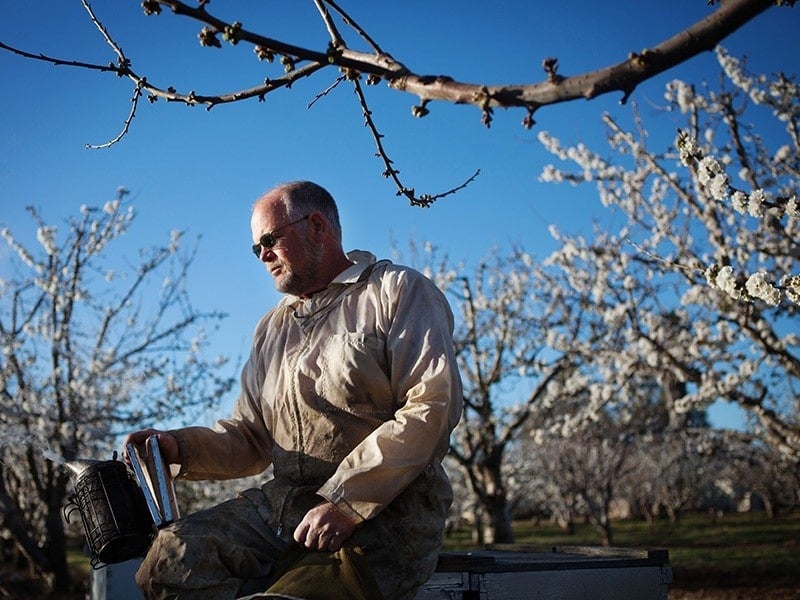 How are your honeybees faring this year?

I’ve had about 90 percent honeybee loss between last spring and this spring. I typically run about 3,000 colonies in our spring count and we instead we had 300.

If you want to look at my winter losses, they were probably about like what the Bee Informed Partnership survey is claiming, around 40 percent. And that is almost exclusively painted up in the press like that’s the annual number that the industry is losing, which is absolute hogwash because it isn’t the full story. The spring losses are greater than the winter losses because generally most things die when they’re most exposed to pesticides. Is that rocket science? No. It’s just that nobody talks about it.

Has the bee die-off impacted your ability to do business?

I used to have all of my adult children working for me. My oldest, Jeremy, has worked with bees ever since he got out of diapers. He’s been my foreman for 20 years. Now, with honey production way down, he’s barely getting paid enough to put food on the table. Things are getting tight because our honey crops are way off. The most barrels of honey I ever produced was about 450. Last year, I had about 68 barrels. Sick bees don’t make honey.

Is climate change impacting your bees?

Yes, but not like you’re thinking, where it’s too hot in the summer or too cold in the winter.

Neonicotinoid pesticides like sulfoxaflor cause problems with thermoregulation in affected insects. One of the problems we have with overwintering our bees is that the cold will now kill a beehive. That didn’t used to be normal. Before, most of the bees in the Midwest stayed all winter. The beekeeper would wrap them with insulation and give them a top entrance, so they could ventilate the moisture out of the colony. And the bees would be just fine, coming out in the spring big enough to split into separate hives. If you try to do that with a bee colony now, it’s dead by November.

It’s not the extreme temperatures. It doesn’t even have to get that cold. They have bee mortality in Florida at 40 degrees. The hive simply can’t thermoregulate. 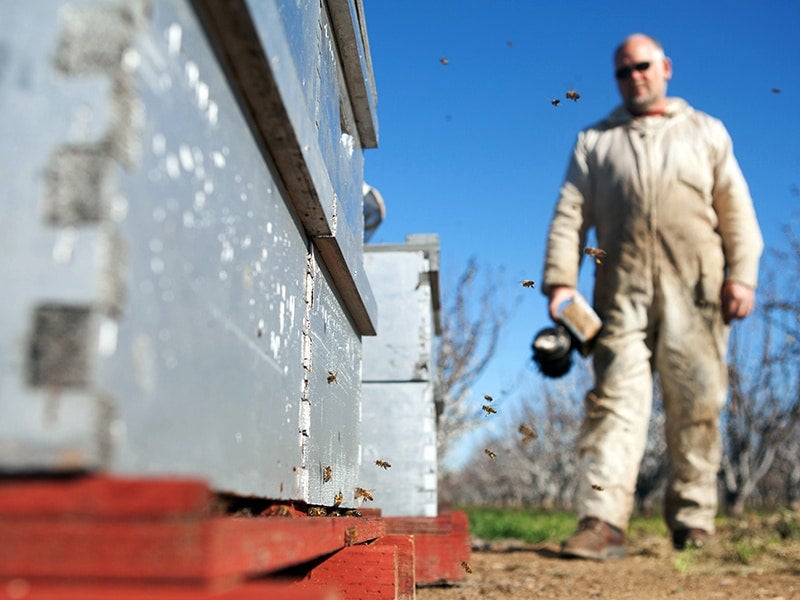 Anderson minds his colonies in a California cherry orchard.

Do you plan on continuing as a beekeeper?

My parents’ generation, they would have stuck with it because they knew you might have a bad year, but it was an anomaly, and the next year was going to be better. That’s what farmers always think. For the most part, that’s true. In the grand scheme of things, you’ve usually got one year in 20 that’s down, so it really wasn’t a stupid decision to dip into your savings to push things forward.

But in year after year after year we keep setting records for low honey production in the U.S. This year, we were down to 300-some hives. You don’t just take 300-some hives and magically sneeze and all of a sudden you’ve got 3,000. You work your tail off, you buy bees from other beekeepers, you get extra queens, etc. It costs a lot of money, and I decided I’m not gonna throw good money after bad in this operation. If Honey Farms can’t pay its way, then it’s going to cease to exist. I see no reason to put the 50 cents I have set aside for retirement into trying to manage a bee operation when I’m 62.

What can people do to support bees?

Consumers are starting to understand that what they put in their mouth has a great deal to do with how often they see their doctor. There’s a direct connection between your health and what you eat. It’s not rocket science. Vote with your checkbook. The chemical industry is in charge on the Hill, unless we can un-buy Congress.

Editor’s note: In 2015, the Ninth Circuit Court of Appeals determined that sulfoxaflor could not be used in the United States, following an Earthjustice lawsuit. The court found the EPA violated the law by approving sulfoxaflor without reliable studies regarding the impact that the insecticide would have on honeybee colonies.

“At a time when honeybees and other pollinators are dying in greater numbers than ever before, Trump’s EPA decision to remove restrictions on yet another bee-killing pesticide is nothing short of reckless,” said Earthjustice attorney Greg Loarie, who litigated the sulfoxaflor case. “Scientists have long said pesticides like sulfoxaflor are the cause of the unprecedented colony collapse. Letting sulfoxaflor back on the market is dangerous for our food system, economy, and environment.”