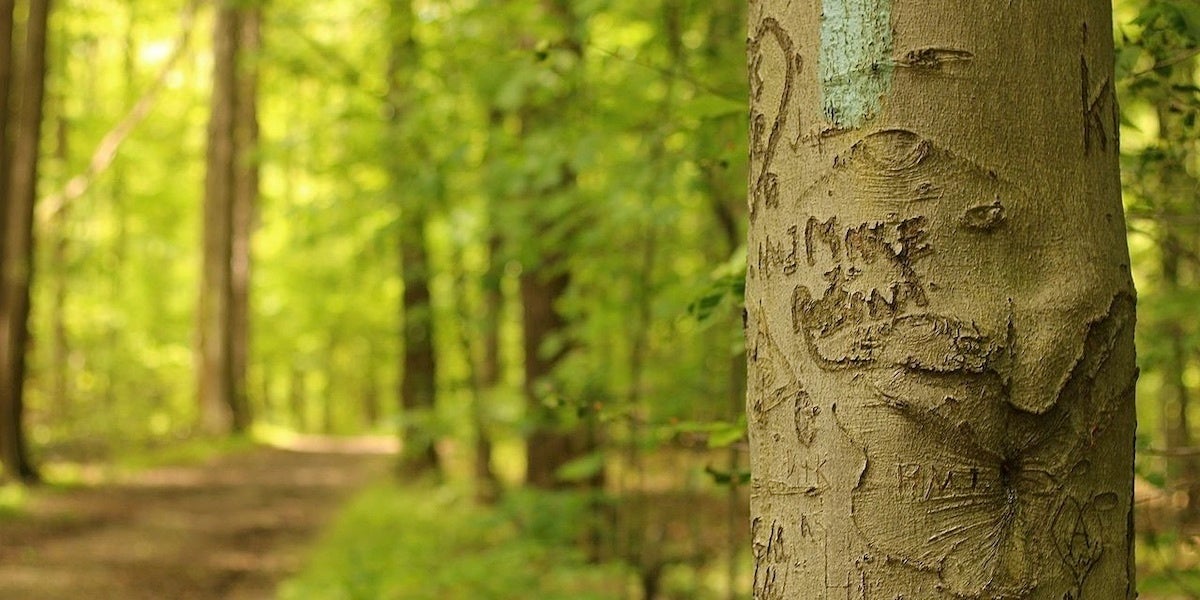 If you’ve seen lovers’ initials carved in a
tree, it’s probably a beech. The iconic species—known for its smooth, delicate bark—is not just a favorite canvas for bark carvers, they provide shelter and food for a large range of wildlife, including birds, squirrels and bears.

But scientists are raising flags on a mysterious, deadly and rapidly spreading beech leaf disease that’s been described as “an emerging forest epidemic.”

The disease (Fagus grandifolia) was first discovered in 2012 on beech trees in northeast Ohio and has since spread to forests in 10 counties in Ohio, eight counties in Pennsylvania and five counties in Ontario, Canada, according to a study published last month in the journal Forest Pathology.

Early symptoms of the disease are characterized by dark green banding on the leaves between the veins. Later symptoms are characterized by solidly darkened leaves that are shrunken and crinkled. The symptoms then seem to progress through the buds, causing them to fall off and produce no new leaves. The affected tree eventually dies. 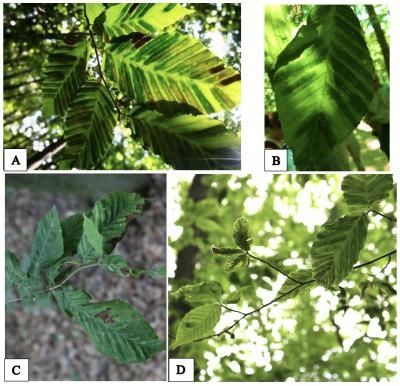 As the North American beech is native to the eastern United States, the researchers “fear this disease has the potential to drastically alter the Eastern deciduous forests of the United States on its own and through potential compounding disease effects,” the study states.

The study was authored by researchers and naturalists from Ohio State University and metroparks in northeastern Ohio.

“It’s hard at this point to say where this disease will go, but it has all the hallmarks of something like emerald ash borer or sudden oak death, threats to trees that start slowly and quickly pick up speed. We seem to be in that rapid expansion phase right now,” senior researcher Pierluigi “Enrico” Bonello, an Ohio State professor of plant pathology, said in a university press release.

For instance, in one Ohio county the disease advanced at 1,250 acres a year between 2012 to 2016 alone, according to the press release.

These startling tree deaths could also come with a heavy price tag, per the release:

“If just half of American beech trees in Ohio were lost, it would come at environmental costs of approximately $225 million, according to an estimate in the new paper that takes into account various factors, including the trees’ role in removing carbon from the atmosphere, maintaining biodiversity, furnishing habitat for wildlife, aiding in water purification, providing aesthetic and recreational value as well as other ecosystem services.”

The study also warns that the disease could affect foreign species as symptoms were found in European and Asian beeches in nurseries in northeastern Ohio.

Scientists are not sure what’s causing beech leaf disease, but Ohio State University researchers suggested that a microbe rather than an insect could be the culprit.

“We’re really not 100 percent sure that it’s a microbe causing this, but the symptoms resemble those of other plant diseases caused by microorganisms,” graduate student Carrie Ewing and lead author of the new paper said in the press release. “There are no infestations or boreholes, or chewing of the leaves like you’d typically see if the disease was caused by an insect.”

Major efforts are underway to determine the causal agent. Molecular techniques are being used to determine if there are any microbial differences between affected and unaffected beech trees.

Other researchers have suggested that a nematode could be to blame.

Unfortunately, there is no record of beech trees that have developed a resistance or have recovered from the disease, according to Constance Hausman, an ecologist with Cleveland Metroparks and one of the authors of the paper.

“Beech trees are a significant food and habitat resource for wildlife. We can’t treat or manage our beech forests effectively if we don’t know what is causing the decline,” she said in the press release.