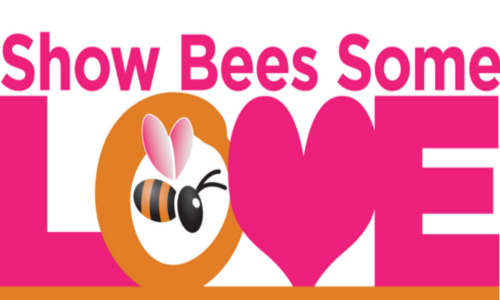 This week, more than 27,000 people coast-to-coast are swarming Lowe’s and Home Depot stores to support the bees that pollinate our flowers for Valentine’s Day. In a coalition campaign called the Bee Week of Action, Beyond Pesticides, Friends of the Earth and allies are delivering more than half a million petition signatures and Valentines asking these retailers to show bees some love by taking off their shelves pesticides shown to harm and kill bees and garden plants treated with these pesticides. 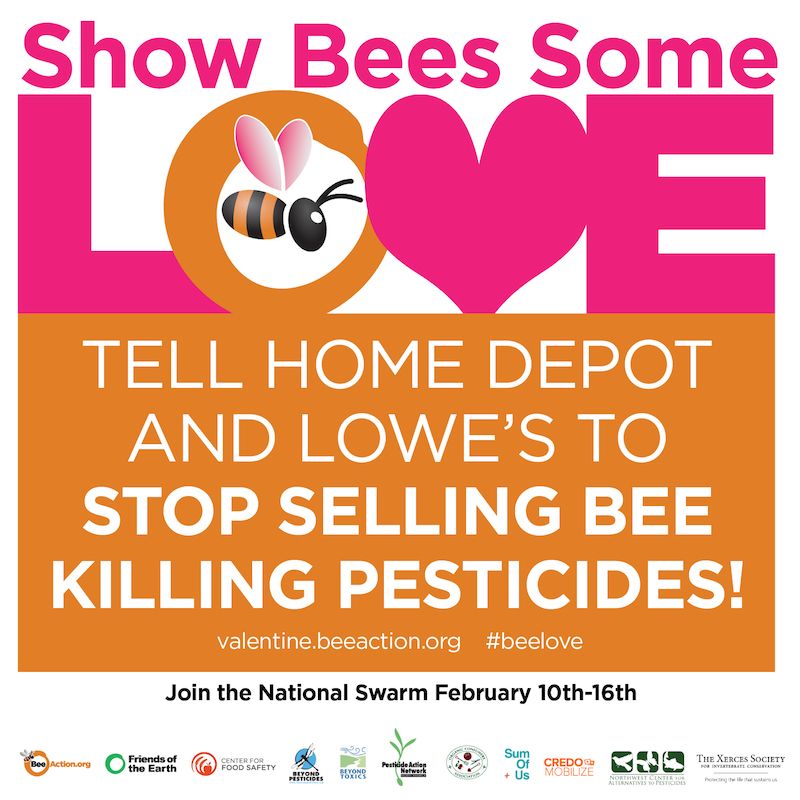 This national week of action is a part of a retail campaign that is calling on retailers to stop selling neonicotinoids—the most widely used class of pesticides in the world—due to a growing body of science indicating that the pesticides are a key factor in recent global bee deaths. Bees and other pollinators, essential for the two-thirds of the food crops humans eat everyday, are dwindling worldwide. Last year, U.S. beekeepers reported losing 40-100 percent of their hives, and they are likely facing another winter of historic bee die-offs.

“The science shows that neonicotinoid pesticides play a significant role in the declining health of bees and other beneficial organisms. It is therefore imperative that action be taken to protect these creatures, given the lack of action at the federal regulatory level,” said Nichelle Harriott, staff scientist at Beyond Pesticides.

A groundbreaking pilot study released last summer found that many bee-friendly garden plants sold at Home Depot and Lowe’s contain neonicotinoid pesticides with no warning to consumers. The European Union’s two-year ban on the most widely used neonicotinoids went into effect in December. In January, the European Food Safety Authority cited evidence that two neonicotinoids, acetamiprid and imadacloprid, “may affect the developing human nervous system” of children, and it recommended further restricting their use.

More than half a million Americans have signed petitions demanding that Lowe’s and Home Depot immediately stop selling off-the-shelf neonicotinoid insecticides for home garden use. Home Depot and Lowe’s have been asked to stop selling plants pre-treated with the pesticides, make third-party certified organic starts and plants available, and educate customers on their policies to protect bees and other pollinators. In response to revelations that home garden plants sold in their stores contain neonicotinoids, Home Depot said they would look into the matter and be in touch with environmental groups. They have yet to respond to requests for a meeting. Lowe’s has not made any public statements or responded to meeting requests.

Neonicotinoids are a class of insecticides that share a common mode of action that affect the central nervous system of insects, resulting in paralysis and death. These systemic pesticides, which move through the plant’s vascular system and express themselves through pollen and nectar, include imidacloprid, acetamiprid, clothianidin, dinotefuran, nithiazine, thiacloprid and thiamethoxam. A growing body of science has implicated neonicotinoids, which are applied to or incorporated into seeds for agricultural, ornamental and garden plants, as a key factor in recent global bee die-offs. Beekeepers across the country reported losses of 40-90 percent of their bees last winter.

The U.S. Environmental Protection Agency (EPA) has delayed action on neonicotinoid pesticides until 2018, despite growing evidence that they are a key factor in bee decline, and more than a million public comments urging swift protection for bees. The EPA has made recent labeling changes to try to reflect pollinator concerns, but beekeepers widely agree that they do not go far enough in bee protection. Additionally, although beekeepers have voiced their concerns about sublethal exposures, EPA has only taken steps to address acute bee poisonings, which it says are primarily caused by dust plumes from seed coatings dislodged from seed planters. Manufacturers are working to reformulate the seed coating technology to control dust, but EPA has made no move to restrict the use of the chemicals which are conclusively demonstrated to cause bee deaths through sublethal exposure.

Last March, Beyond Pesticides, Center for Food Safety, beekeepers, environmental and consumer groups filed a lawsuit in Federal District Court against the EPA for its failure to protect pollinators from dangerous pesticides. The lawsuit seeks to suspend the registrations of the neonicotinoids clothianidin and thiamethoxam, which have repeatedly been identified as highly toxic to honey bees. The suit challenges the EPA’s oversight of these bee-killing pesticides, as well as the agency’s practice of “conditional registration,” which leave critical health and environmental questions unanswered, and labeling deficiencies. Despite this suit and other public concerns and efforts regarding pesticides and the health of bees, the EPA recently registered two new active ingredients, sulfoxaflor and cyantraniliprole—both known to be highly toxic to bees.

Partnering with Beyond Pesticides for the Bee Week of Action is: Friends of the Earth U.S., Beelieve, Beyond Toxics, Center for Food Safety, CREDO Mobilize, Friends of the Earth Canada, Northwest Center for Pesticide Alternatives, Organic Consumers Association, Pesticide Action Network, SumOfUs and the Xerces Society for Invertebrate Conservation. For a listing of cities participating in action, click here.