Bee Study Author Fights Back Against Bayer and Syngenta Accusations 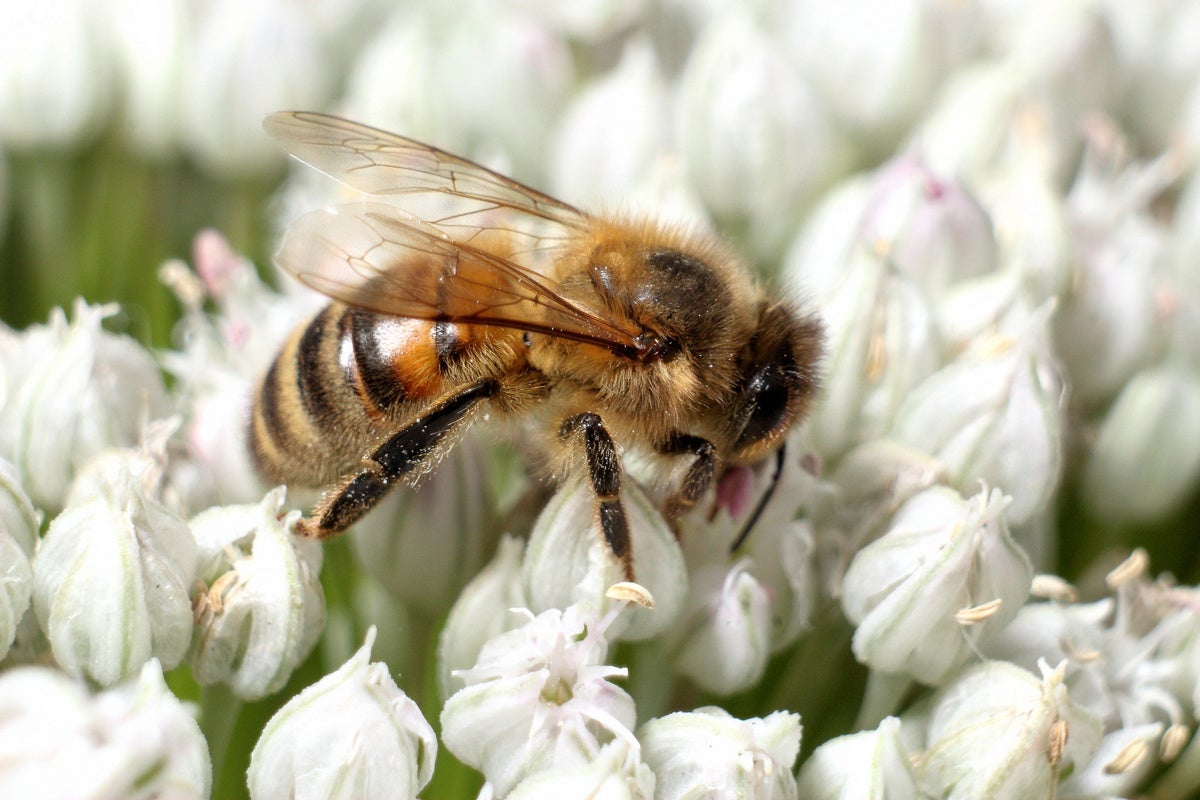 The lead author of a major study which found that neonicotinoid pesticides harm honey bees has hit back against criticism from the chemical companies that part-funded the work.

Dr. Ben Woodcock from the Centre for Ecology and Hydrology (CEH), said Bayer and Syngenta, which produce the controversial pesticides, had looked to undermine his work after it was published, despite providing $3 million in funding.

Speaking exclusively to Energydesk, he said:

“From a personal perspective, I don’t really appreciate having them accuse me of being a liar. And accusing me of falsifying results by cherry-picking data. That’s not what we’ve done. I’ve got little to gain from this and it’s been a major headache. We just present the results we get.”

Woodcock said the accusations made by Bayer and Syngenta were “utterly unfounded.”

“I’m intrigued to know what they would’ve wanted us to do. If you find negative results on key metrics—number of bees in hives, number of bees surviving after winter—how would they want us to present that? How could we interpret this in what they see as an unbiased way?

“Science papers are short. There about 1,500 words. The discussion is tiny on this. It’s like a paragraph. So it’s not like we spent vast amounts of time discussing the details of this. You literally present the results more or less as they are, along with some broad statements on what you observed.”

The study, which was part-funded by Bayer and Syngenta, with the rest paid for by the UK government-backed Natural Environment Research Council, examined the impact of two neonicotinoids—clothianidin (made by Bayer) and thiamethoxam (made by Syngenta) on wild bees and honey bees in three European countries: Germany, Hungary and the UK.

The experiments occurred in the field, with bees feeding on oilseed rape crops, treated with the neonicotinoids. From the start of the work in 2014, the research was hailed as significant. It was the first time neonics had been tested on such a large scale.

The results differed from country to country, with bees largely unaffected by the chemicals in Germany, but badly hit in the UK and Hungary. Overall, the scientists concluded that the chemicals had a negative impact on the ability of wild bees to reproduce, while also showing, for the first time in real world conditions, that neonicotinoids harm honey bees.

Bayer and Syngenta have both highlighted the results from Germany.

“They’re trying to reduce the size of our experiment, by putting it into individual countries. And when you do that you reduce the replication to such a level that it’s basically impossible to find a difference between an effect of neonics or no neonics,” said Woodcock.

“Bayer and Syngenta said that if you look at each country individually, then you don’t get the effects you see in our study. If you do any experiment, you have to think about replication.

“Think about tossing a coin in the air: if you tossed a coin once in the air and you got heads, would you assume that you would get heads every time? No, you would do it again and again until you understand there is a 50:50 chance of the coin landing on heads. And every experiment is like that. The more times you replicate something, the more chance you have of understanding what’s going on.

“This is a problem that is well established in the literature. Previous studies have been criticized for having very poor replication because if you don’t have the replication you could report the absence of an effect of neonics even when one was present.

“They’re trying to muddy the waters. Because people aren’t aware of how the regulations work and what the regulatory body wants to focus on. They’re trying to say look at everything, rather than saying actually what they’ve presented here are the core metrics by which pesticides are regulated. That’s a bit cynical.”

Neonicotinoids have long been controversial, with recent research showing that the chemicals have a negative impact on bees and other pollinators.

In 2013, the European Commission decided to issue a temporary ban on the pesticides in the EU, citing the risk the chemicals pose to bees.

After taking evidence on the impact of the chemicals on bees for the last few years, the commission is reportedly likely to call for an outright ban on the chemicals at the end of 2017.

Bayer and Syngenta have repeatedly funded research showing that the agricultural chemicals do not harm bees and other pollinators.

Woodcock highlighted a number of papers from the last few years and accused both companies of putting out “statistically flawed” studies.

He said: “What shocks me is how they can put out statistically flawed or massively under-replicated studies that show no effect and don’t bat an eyelid. But then they tear apart any study that shows a negative effect as statistically wrong and unrepresentative.”

During the interview, Woodcock cited research published in 2013 by Plos as being particularly flawed.

The study, which credits Syngenta’s Peter Campbell as an author, examined the impact of repeated exposure to thiamethoxam on honey bees and found the chemical posed a “low risk” to the insects.

An assessment of the work published earlier this year in Environmental Sciences Europe by scientists from St. Andrews University found the study to be “largely uninformative,” “misleading” and based on “inadequate” data.

Asked for a response to Woodcock’s comments of the quality of its research, Bayer referred to previous comments made after the release of the CEH study.

Syngenta told us: “We stand by our position that this is an inconclusive study that asks more questions than it answers. It should be noted that a number of other independent scientists who have reviewed this paper expressed similar concerns via the UK Science Media Centre.

“The data generated in the study whilst variable, provides valuable and unique insights that help to better understand the ways in which neonicotinoid pesticides can be used safely. The report is a helpful contribution to the ongoing debate about pollinator health.”

‘I’m Not Surprised They Weren’t Happy’

Sunday Energydesk revealed that while the research was being carried out, Bayer and Syngenta made repeated attempts to get hold of the raw data from the experiments on wild bees which were funded by the Natural Environment Research Council, only to be rebuffed by the scientists.

Email correspondence obtained under the Freedom of Information Act, also showed that both companies also sent their own studies to the scientists showing that the chemicals were a low risk to bees, but were largely ignored.

After publication, Syngenta sent us a statement which read: “CEH appear to have responded to funding, interaction, and requests for data by drawing an even stronger negative conclusion regarding the impact of neonicotinoids on bees.” 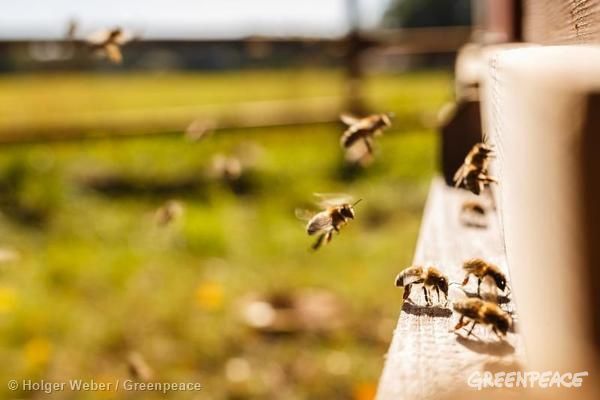 “This study is not conclusive… but it is sufficient to show there is something going on.” Holger Weber / Greenpeace

Woodcock, an ecological entomologist at CEH who has in the past been commissioned to do research by the UK government, told Energydesk he was not surprised that Bayer and Syngenta had reacted negatively when the results from the experiments came in.

“I’ll be honest, it wasn’t a surprise to me that they weren’t happy. We knew as soon as the results came back as being negative, they weren’t going to be happy and I understand that.

“They’ve got a massive commercial interest in this. They pay for the data and the data is appended to the end of the paper. It’s freely available and the idea is that other people can have a look.

“This is our interpretation and we believe it a robust interpretation. It’s open to other people to look at. But the way they’re doing this seems to be focused on getting a result they want, rather than doing it in a robust manner.”

Future of the Debate

Looking ahead at what impact the research might have on the future of the neonicotinoids debate, Woodcock said he doesn’t believe it can be proved conclusively that the nicotine-based chemicals harm bees, but he said: it is sufficient to show there is something going on.”

He added that there is some evidence, as shown in the experiments in Germany, that a high-quality natural environment for bees, can increase their chances of surviving not just neonics but also climate change and other factors that are thought to have led to declining bee populations.

“If you can create high-quality habitats and resources in an agricultural landscape that helps bee populations, they are more likely to take a lot of the impacts of environmental change exposure to something like neonics. This is not something that’s been conclusively shown, but good habitat is likely to help.

“It’s easy to say ban neonics, but you’ve got to take into account what the alternatives are. Simply saying there’s no effect of neonicotinoids is not the way to go. There needs to be a sensible acknowledgment that there is a problem so we can work out a solution that best serves society and the natural environment.”