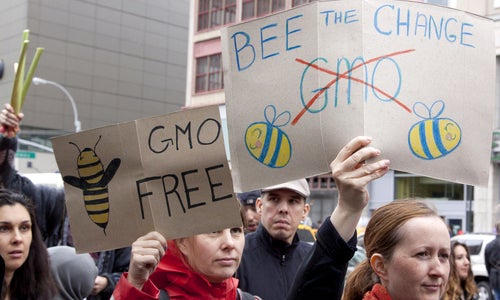 Concerned about the bees and the butterflies? Interested in celebrating National Pollinator Week? It’s happening next week, June 16-22.

And it’s brought to you, in part, by none other than Monsanto and Bayer. 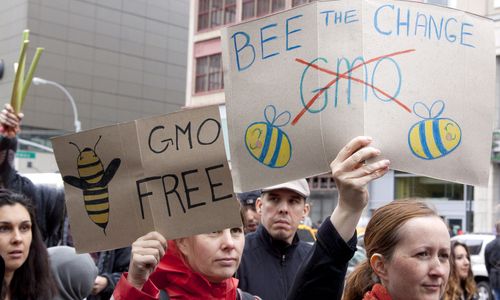 Who supports (i.e. funds) the Pollinator Partnership? Among others, Bayer and Monsanto—the very companies that are killing pollinators with insecticides and genetically engineered crops.

It’s all part of a well-documented, well-funded (and shameless) public relations campaign by the pesticide industry to give the appearance of “caring” about the die-off of bees and butterflies, while diverting attention from the cause of those die-offs—highly profitable products made by Monsanto and Bayer.

In honor of Pollinator Week, share this article. And make plans to join a pollinators celebration that hasn’t been taken over by the agrichemical and biotech companies: Bee Against Monsanto’s Global Swarm to Save the Bees on Aug. 16.

Three ways Monsanto and Bayer are killing the bees:

In 2000, scientists discovered that genetically engineered traits in pollen can be transferred to bees though their digestive systems.

Researcher Hans-Hinrich Kaatz, a leading German zoologist, released bees in a field of canola that had been genetically engineered to tolerate Monsanto’s Roundup herbicide. He then fed the canola pollen to younger bees and observed that the bacteria in the guts of the young bees took on the traits of the canola’s modified genes.

Kaatz’s research predated Colony Collapse Disorder. That term, for the disappearance of bees from the hive, wasn’t coined by scientists until 2006.

With the mass death of bees yet to come, the discussion of Kaatz’s findings focused less on how Monsanto’s genetically engineered herbicide-tolerant “Roundup Ready” crops could harm bees, and more on his research’s suggestion that all types of bacteria could be contaminated by engineered genes, including those that live inside the human digestive system. Scientists warned that this would impact the bacteria’s vital role in helping the human body fight disease and aid digestion. Even worse, if the antibiotic-resistant gene used in genetically engineered crops crossed over to bacteria, it would cause human infections to become resistant to antibiotics.

The warnings were prescient. Kaatz’s work foreshadowed the correlation between the increase of Monsanto’s Roundup Ready crops in the human diet, and the rise of gastrointestinal disorders, immune diseases and antibiotic resistant infections.

Inadvertently, he also predicted how the increased use of Monsanto’s Roundup Ready crops would spur Colony Collapse Disorder in bees.